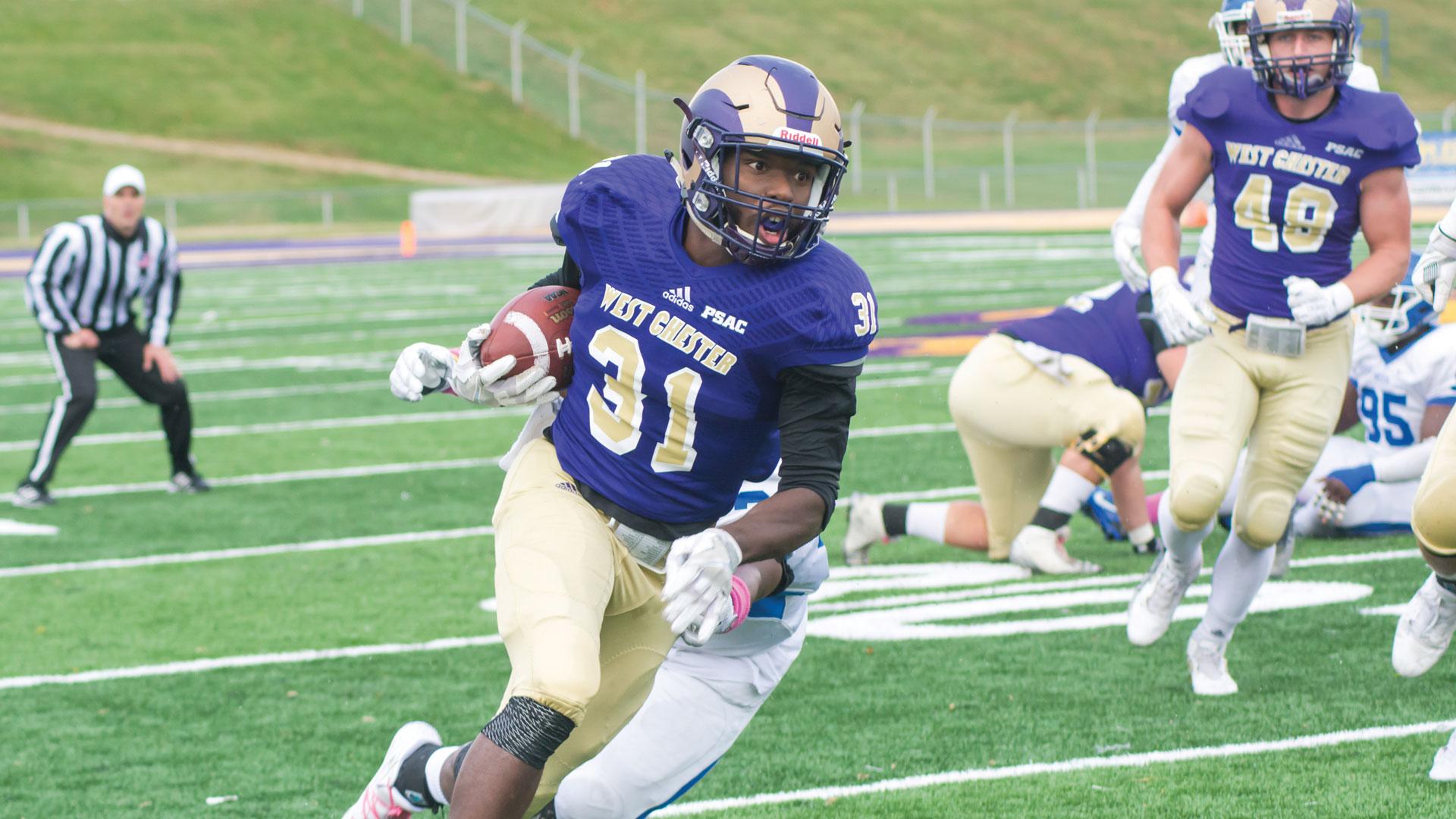 West Chester University football (6-3, 5-1 PSAC) bumped their win streak up to four on Saturday afternoon after a 41-14 road romping of the East Stroudsburg Warriors (4-5, 2-4 PSAC) in front of 1,440 fans at Eiler-Martin Stadium.

This marks the fourth consecutive season in which WCU has bested ESU in the two teams’ yearly clash, with the Warriors’ last victory coming in 2012 by the score of 35-28. Since that defeat, the Golden Rams have outscored East Stroudsburg a combined 151-85 in games played between the two.

West Chester’s ground game is what propelled the team to victory, as the team amassed 386 yards rushing. Jarel Elder had 118 yards and two touchdowns on 17 attempts, and Eerin Young almost mirrored that production, going for 110 yards and a touchdown on 13 attempts.

Quarterback Pat Moriarty, who brilliantly orchestrated West Chester’s passing game with 94 yards and a touchdown on 10-28, also scampered for 52 yards on five attempts. Mike Class (34 yards, 7 attempts), Paul Dooley (31 yards, 6 attempts), Mark Dukes (31 yards, 6 attempts), and Anthony Brown (12 yards, 3 attempts) amassed 108 yards as a four-man unit, adding to the rushing bravado the team had been enjoying from the likes of Elder and Young.

West Chester had a strong defensive performance to boot as well, and that becomes more indicative after taking a quick skim of the box score.

ESU only ran 58 offensive plays, with their 23:21 time of possession paling in comparison to WCU’s 36:39. ESU also whiffed on both of their field goal attempts, one from 39 yards and the other from 46 yards out.

One thing WCU’s coaching staff won’t be happy with is the penalization. The Golden Rams were penalized nine times for 85 yards, and surrendering great field position is something that cannot occur, especially in the postseason.

West Chester may not have sacked starting East Stroudsburg quarterback Tim DiGiorgio, but Golden Rams defensive back Nydair Rouse intercepted one of his passes and returned it 28 yards for a touchdown in what was a 21-point fourth quarter for WCU.

ESU scored on a 46-yard pass from DiGiorgio to Javier Buffalo after an Elder touchdown run with 10:12 remaining in the final frame, but that tally was succeeded by a five-yard scoring run from Young with 6:54 before Rouse’s pick-six put the contest on ice.

Shaquille James, Deionte Wilson and Kevin Duggan all recorded at least five tackles as well, with James’ seven leading the trio, five of which were solo.

Elder and Young’s performances will be forever cemented in WCU football history, as it marks just the 19th time two West Chester rushers eclipsed 100 yards in the same game. It’s the first time for this occurrence since Nov. 29, 2014, a playoff game against the Concord Mountain Lions in which Brandon Monk (122 yards, 15 attempts) and Eddie Elliot (116 yards, 21 attempts) both surpassed the 100-yard mark.

The Golden Rams’ 386 yards on the ground also marks the sixth-most amount of rushing yardage the team has amassed in a single game, and it’s their most since they exploded for a school-record 456 rushing yards against Millersville in 2013 when they shellacked the Marauders 48-3 and former Golden Ram Rondell White, who now plays football professionally in France, exploded for 227 yards and three rushing touchdowns.

West Chester has won 60 of their 82 meetings with East Stroudsburg, an imbalance greater than elephants and ants on seesaws. The seniors on the team have gone 4-0 against ESU during their tenure, making them the first class with that distinction since 1990.

West Chester will play their second-to-last game and final home contest of the season on Saturday, Nov. 11 against the Millersville Marauders (2-7, 1-5) at 12:05 p.m. The date also marks Military Appreciation Day, and will feature a pre-game ceremony to honor the graduating members of the team, as well as the cheerleading squad and marching band.

Be sure to support your Golden Rams as they look to extend their win streak and put the finishing touches on what has been a successful second half of the season.