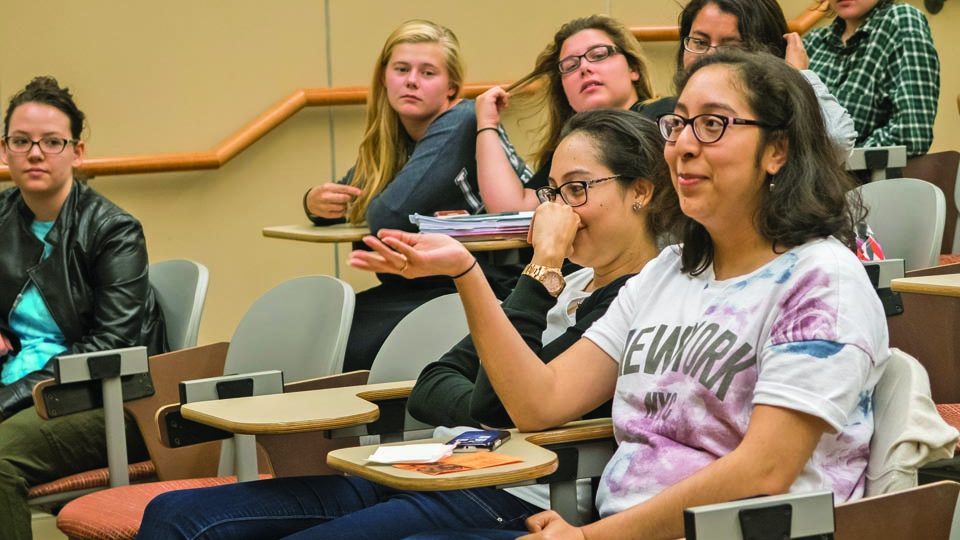 On Wednesday, Sept. 28, West Chester University kicked off its second annual Global Hispanic Film Festival in Mitchell Hall, with numerous faculty, students and members of the public in attendance to watch the first film, “3 Beauties.” The festival, which is scheduled to show five films over the next five weeks, is in its second year at WCU. Before Wednesday’s screening, I got the chance to talk with the festival’s organizers, Dr. Megan Saltzman and Dr. Iliana Pagán-Teitelbaum, to learn a little bit more about how the event came to the university.

Pagán-Teitelbaum came up with the idea for a Spanish-language film festival two and a half years ago. The process had to begin with applying for grants to fund the project, both internal and external. The internal grant was the WCU University Forum grant, and the external grant that Saltzman and Pagán-Teitelbaum, both assistant professors of Spanish, were going for was from Pragda, an education-based Spanish-language film distributor.

After applying for and receiving both grants, Pagán-Teitelbaum and Saltzman then had the funds to purchase the copyrights to show the films to the public.

“The thing that a lot of people don’t realize is that to show the film to the public, you have to purchase a copyright, and they’re expensive,” Saltzman said. “But the Pragda grant offers a reduced price for the screening rights.”

The process to get a Pragda grant is competitive, but WCU was lucky enough to receive it two years in a row. With the grant from Pragda, Pagán-Teitelbaum and Saltzman have over 100 films to choose from to show for the festival. Then, once the festival ends, the films will be sent to our school’s library for student and faculty enjoyment. This year’s festival is slightly different from last year’s, mainly due to its name change. In 2015, the event went by WCU Spanish Language Film Festival, but Saltzman explained to me why she felt the name could be improved.

“‘Spanish Language’ [as a title] in itself is a bit limiting because, for example, in the U.S. we also have Spanglish, and in Latin America, there is also Portuguese, Quechua, or in Spain, Arabic is also spoken,” Saltzman said. “In the films, other languages are present, and for me, and for Dr. Pagán-Teitelbaum too, this is a really wonderful thing! So we would like to convey that as realistically as possible.”

Global Hispanic Film Festival sounded like the perfect name to encompass all of the diversity that comes with the cultures and languages that can be found in the films.

Aside from the name change, the festival has not diverted too much from its true goals and intentions: to educate and expose WCU students and the public to the “wide range of realities and feelings” that can come from Hispanic arts. Saltzman explained to me that oftentimes, students who take Spanish culture cluster courses at WCU are exposed to the most urgent (and often times, dark) topics related to social issues, like poverty, discrimination or war. This is due mainly to time constraints. Obviously, professors can’t cover everything about a given culture in one semester.

The film festival strives to show those who attend that there is more to these other cultures we may see as too different from our own. There is liveliness and humor running through the veins of not only these countries, but the people who live in them. Hopefully, these films can act as a pathway for viewers to see that there are just as many similarities in the cultures that produce them to our own.

“We do try to choose a variety of different countries, topics and genres,” Saltzman told me.

That strive for diversity has brought five very unique films to this year’s festival. The first film that was screened, “3 Beauties,” is a satire out of Venezuela. The rest of the films to be shown are from all over the world, including Spain, Bolivia, Brazil and Uruguay.

When I finished speaking with Saltzman, I headed to Mitchell room 102 to get ready for the showing. Pizza was served, and both organizers spoke briefly about the festival. Then, Dr. Megan Corbin introduced “3 Beauties” to the audience.

I thought the movie was absolutely amazing. It was humorous yet dramatic, and even a little campy at times. But it managed to explore some really intense themes about Venezuela’s beauty pageant industry. And all of the films will be shown with English subtitles to make them accessible for audiences to understand. Especially given that I’m minoring in Latin American studies and Spanish, I thought the festival was a fantastic way to learn more about the field I’m interested in, and free pizza during a movie showing never hurts.

After the film ended, Corbin conducted a 20-minute discussion with the audience, who all seemed to thoroughly enjoy the film. There was a woman from Venezuela in the audience who testified to some of the themes that the film explored, which made the night that much more interesting and worthwhile.

The festival has four more films to show through the end of October, which not-so-incidentally is National Hispanic Heritage Month. Hopefully, those who attend the screenings will see the similarities between their own culture and those that the films display.

“I hope that [audiences] in some way, can be able to relate to this ‘foreign’ culture,” Saltzman said. “You know, there’s a negative stereotype in mainstream culture that the foreign is ‘the other,’ that it’s us versus them, and that’s absolutely false. I think that I would say that [the audiences] can see that in many ways these cultures are very similar to our own and that they’re just as human as we are.”

Pagán-Teitelbaum shared similar sentiments about her hopes for audiences that attend the festival.

“Our hope is that the Global Hispanic Film Fest will become a well-known yearly tradition,” she said. “[We hope] that students, faculty, staff, as well as the West Chester community will attend, interact and learn from each other in the film forum.”

The festival could not have succeeded without the help and support from the Latin American and Latino/a Studies Program and the Department of Languages and Cultures, along with the generous student volunteers from Latino American Student Organiza- tion (LASO) and Spanish Club.

You can learn more about last year’s festival and what films will be shown this year by visiting http://festivalcinewcu2016.tumblr.com/info.

Rachel Alfiero is a fourth-year student majoring in communication studies with minors in Latin American Studies and Spanish. ? She can be reached at RA806657@wcupa.edu.