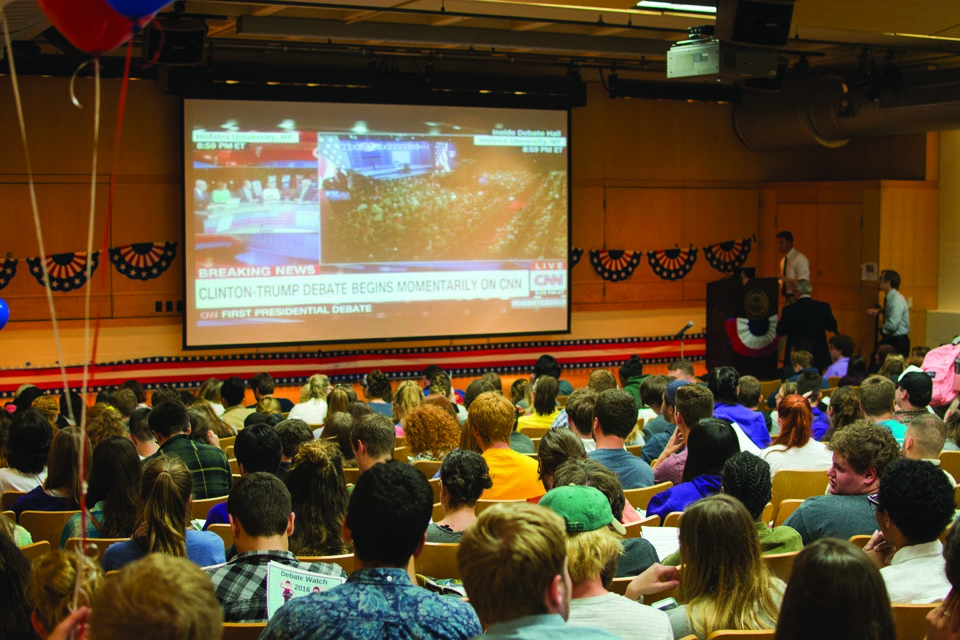 After months of strenuous anticipation, the first presidential debate finally occurred. On Monday, Sept. 26, Democratic candidate Hillary Clinton and Republican candidate Donald Trump came face to face on the debate stage. While thousands gathered to watch this truly historical debate, students at West Chester University, both Democratic and Republican alike, sat down in Sykes Theatre to view the event.

Approximately 300 students came out to watch the candidates battle it out in what turned out to be a very personal debate. Trump stated several reasons why he believes Clinton is not fit to be president, including her “lack of stamina.” Clinton cited that she traveled to 112 countries to negotiate trade deals as Secretary of State. If Trump accomplished that, Clinton said that then “he can talk to me about stamina.”

The overall brutality of the debate was certainly recognized by commentators and students. As the candidates continued their verbal attacks on one another, students had a lot to say, not only about the candidates they supported, but why they thought the viewing event was important.

“I think a lot of students simply take on their parents’ beliefs, so I think it’s good for them to come out and form their own opinions,” said freshman Kelly Lovett.

The debate was definitely the kind of event where opinions are generated, as Clinton and Trump chose such largely opposing stances on several main issues. The debate topics ranged from America’s economic status to how each candidate would effectively fight terrorism.

Clinton appeared strong on topics such as taxes; her plans to raise taxes on the wealthy have been a key point in her campaign since the beginning.

Clinton took time to mention Trump’s plan for the nation’s economy, labeling the plan “Trumped Up Trickle Down,” and stating that it will benefit only the wealthiest members of society. Trump came back sounding equally strong on the Trans-Pacific Partnership.

Trump took the time to mention Clinton’s past support of the deal and later disapproval. Clinton fired back, stating she had hoped the deal would work but could not support the final terms of the agreement.

As debate topics continued to change, reactions from the Sykes Theatre audience were changing equally as fast with a continuous mixture of cheering, booing and laughter.

Old talking points were raised, such as Clinton’s email scandal and Trump’s refusal to release his taxes. Although the debate is meant to be an opportunity for the public to hear the candidates’ stances on important issues facing the nation we live in, the candidates managed to veer off topic relatively easily.

Both candidates certainly came prepared to throw a few jabs. Clinton mentioned Trump’s comments on women being “pigs, slobs and dogs,” along with his comments to a former Miss Universe stating, “Miss Housekeeping… Because she was Latina.”

Trump came equally prepared with a counter statement to such jabs, stating, “I was going to say something extremely rough to Hillary, to her family, and I said to myself, I can’t do it. I just can’t do it. It’s inappropriate; it’s not nice.”

The candidates’ facial expressions said as much as their words, especially in regard to the topic of temperament.

Clinton later mentioned Trump’s comments about a group of Iranian sailors taunting American sailors while out at sea. Clinton went on to quote Trump several times.

“If they taunted our sailors, I’d blow them out of the water,” said Clinton, while quoting Trump’s comments on the event. Clinton went into detail about why saying such things and taking such actions would lead to war.

Trump’s response was initially, “That wouldn’t start a war.” Clinton went on to state that Trump has “poor judgement and the wrong temperament to be president.”

“His cavalier attitude about nuclear weaponry is so deeply troubling,” said Clinton.

Trump responded with an initially surprising statement, “I agree with her on one thing: the single greatest problem the world has is nuclear weapons, not global warming like you think and your president thinks.”

This was the only point that the words, “I agree,” were uttered during the entire debate; it was quite amazing to hear even if the amazement was short-lived with Trump’s statement ending in yet another political jab.

The debate was certainly something to be considered historical and a key point in both of the candidates’ campaigns. The true winner of the debate is a tough mark to make.

What can be said is that both candidates came prepared and were able to give their supporters a better idea of who they are voting for. The overall importance of the event should not be dismissed. The debate allowed both Trump and Clinton to express their opinions on serious topics that affect our nation.

Viewers were able to gain a better understanding of what each candidate will be like as president. The need for this event was definitely something that was felt and expressed at the WCU viewing of the debate.

“If I had to pick one event in this political process to bring these students to, it would be this,” said Dr. David Levasseur.

Now that the first debate has come and gone, both candidates have their eyes set on the next debate which will take place on Sunday, Oct. 9 at Washington University.

Sean Smith is a first-year student majoring in communication studies. He can be reached at? SS866152@wcupa.edu.