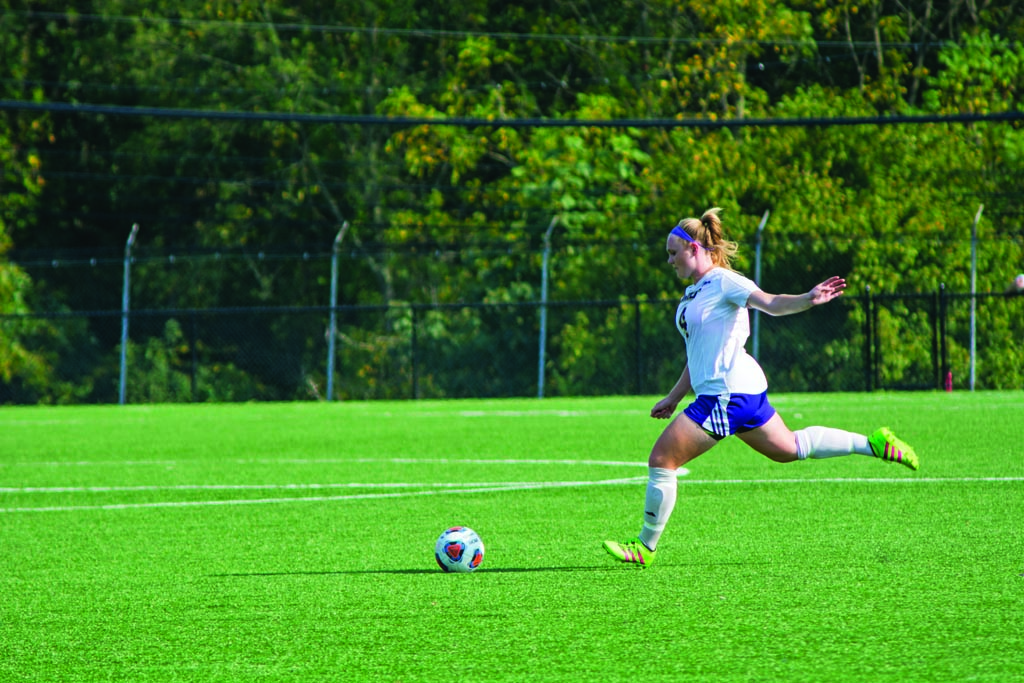 The West Chester University women’s soccer team couldn’t ask for a better start to their season, opening up at 4-0 on the year with wins against Bloomsburg University, University of Pittsburgh at Johnstown and Mercyhurst University.

Picked to win the PSAC in the preseason poll, the Golden Rams opened up the season at home against Bloomsburg.

A close first half ended with 7-6 advantage in shots with both teams unable to find the back of the net. Erin Bielski broke the scoreless tie less than two minutes into the second half during a net-front scramble.

West Chester answered right back less than five minutes later as a pair of seniors, Kara Parvel and Scarlett Walsh, connected for a goal when Parvel found Walsh for her first of the year.

West Chester dominated the stat sheet in every category except for the goal column. The Golden Rams outshot the Huskies 17-10 and held a 9-2 corner kick advantage in regulation. The game would remain tied 1-1 for the remainder of regulation as the two sides went into overtime in the season opener.

WCU held a 4-0 shot advantage in the first overtime but was unable to score, and the game headed into double overtime. Senior defender Carly Henry found Linzi Wolfe just three minutes into the double overtime period for the winner to seal the victory over Bloomsburg for West Chester.

Looking to carry the momentum from the double overtime win into the next game, WCU traveled to UPJ for the second game of the season. This game was about as lopsided as they come in terms of soccer.

The Golden Rams outshot UPJ 20-1 in the first half, as Erica Hansen and Jenny Bail each netted their first goals of the season to give WCU a 2-0 lead going in the half.

They outshot UPJ 12-1 in the second half and scored another three goals for an impressive 5-0 victory in the second game of the season.

Lexi Brown, Kaitlyn McFadden and Gabrielle Termini all scored their first goals of the season in the second half. Senior goalie Alex Srolis earned the win in net, advancing her record to 2-0 on the young season.

After the impressive 5-0 shutout victory over UPJ, the Golden Rams kept the momentum rolling against Mercyhurst at home. West Chester again dominated the entire game, holding an 11-2 shot advantage in the first half, with Parvel netting her first goal of the season to give WCU a 1-0 lead at the half.

WCU held the 1-0 into the final minutes of the game when Mercyhurst started to throw everything they had at West Chester, bringing everyone up including their goaltender. In the 88th minute, Marissa Valenti cleared the ball from the WCU defensive zone and sprung Wolfe on a breakaway in which she scored the game-sealing goal to give West Chester the 2-0 and its third straight victory.

The Golden Rams continued their hot streak at home on Saturday against Gannon University. Walsh got things started for West Chester 14 minutes into the game with a goal assisted by Brown. Walsh then picked up her second of the game in the 36th minute to give WCU a 2-0 lead going into half-time.

Brooke Morgan tacked on another for West Chester to open up the second half in the 51st minute on another assist from Brown for a 3-0 lead. McFadden made it 4-0 for the Golden Rams in the 68th minute, and Nikki Zaso tacked on her first goal of the season in the 79th minute to finish off the scoring and gave West Chester another convincing 5-0 shutout victory.

This year’s team has 11 seniors on the roster, so experience will be a key component in the success of the Golden Rams this season. They have returning players at almost every position, and depth players who are ready to slot into a prominent role if needed.

If the first few games are any indication of how this season will be, it could be a very exciting one for West Chester women’s soccer. They look forward to keeping their winning streak going this week with matchups against Kutztown University and California University of Pennsylvania.