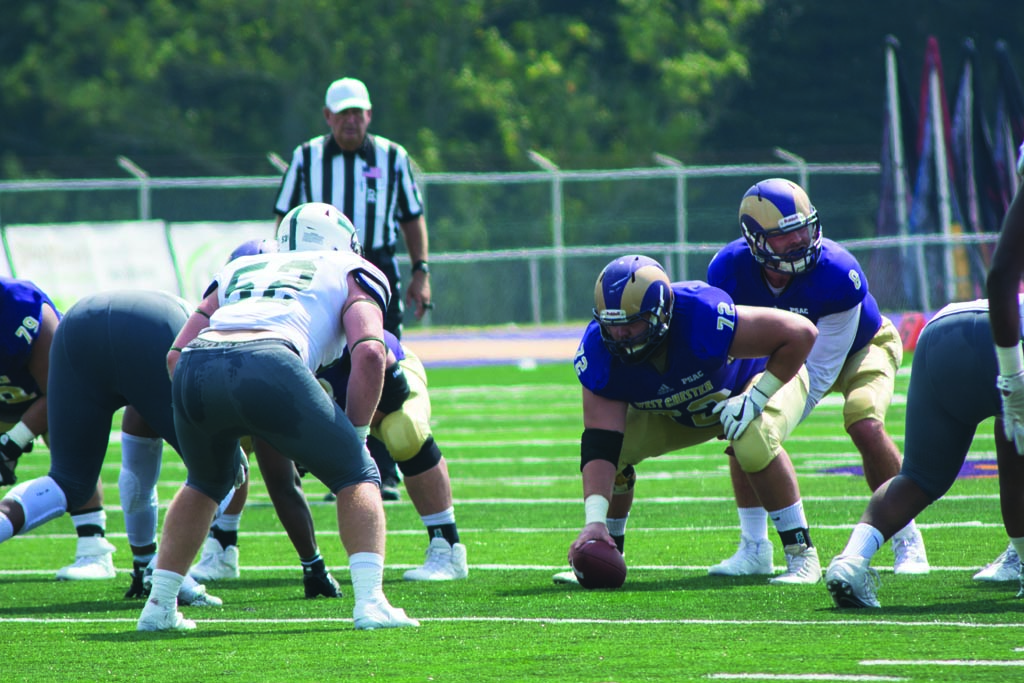 West Chester University football had their hopes of a successful home-opener crushed as they fell 36-28 to Slippery Rock University inside of John A. Farrell Stadium on Saturday, Sept. 10.

WCU’s offense didn’t get going until the second half, where they mounted a serious comeback that sent shock waves of fear to the Stony Brook sidelines as the Golden Rams threatened to snag what they assumed was a victory.

Out of West Chester’s first eight possessions of the game, only one resulted in any points, with the other seven ending in either a turnover or punt. SBU’s attack proved to be much more meticulous and efficient, as they raced out to a 22-7 lead.

Junior quarterback Andrew Derr, who finished with 435 yards and three touchdowns on 31-for-62, hit wide receiver Jordan Banks with a touchdown pass at the 2:14 mark of the final frame to make it a one-possession game.

It appeared as if WCU’s mission of hijacking the momentum was accomplished when SBU running back Shamar Green fumbled at the West Chester 23-yard line on the ensuing possession. Linebacker Kevin Duggan recovered the muffed ball, which was crucial due to the fact that the Rams’ onside kick attempt prior to Green’s gaffe failed.

Derr managed to engineer a seemingly promising drive that sent WCU quickly trekking down the field, which reached the Rock’s 45-yard line, but it proved to be all for naught as WCU failed to convert on 4th-and-10 with 50 seconds left, putting the Rams’ comeback hopes to rest.

Derr’s 31 completions and 435 yards both established new career-highs, but he also threw three interceptions, one of which was at Slippery Rock’s 4-yard line with 20 seconds left in the first half. Converting on possessions like that are key in close games such as these, especially when players are within close proximity of the end zone.

Shannon Mayer was Derr’s main target in this one, as he accrued 128 yards and two touchdowns on nine receptions. Tyler Karpinski hauled in five receptions for 84 yards, and Ee- rin Young snagged down six balls for 74 yards.

West Chester’s ground game was pioneered by Jarel Elder who racked up 40 net yards on 15 rushing attempts. Derr also showcased his versatility by finishing the game as the Rams’ second-leading rusher with 27 net yards and one running touchdown.

WCU’s effectiveness running the ball paled in comparison to that of Slippery Rock, who accumulated a sizable portion of their offense via the ground. Green finished with 117 net yards, 52 more than WCU amassed as a team, and two touchdowns on 19 rushing attempts. Other contributors in the ground gang for SBU included quarterback Don King III (26 net yards on seven attempts) and Dominic Dingle (11 net yards on six attempts).

King also conducted the Rock’s aerial assault masterfully, finishing with 171 yards, three touchdowns and one interception on 13-of-30, hitting Marcus Johnson, Cornelius Ray and Leroy McClain each in the end zone. WCU defensive back Deionte Wilson picked King off at the end of the third quarter.

West Chester trumped Stony Brook in many statistical categories such as first downs (26-17), total yards (500- 341) and third down conversions (8- for-20 compare to SBU’s 2-of-20), but they were bested where it matters most: the scoreboard.

The Rams received 11 penalties for 79 yards. They also allowed SBU to sack the quarterback four times for a loss of 20 yards, something that must be rectified going forward into next week’s away showdown with Edinboro University.

3,089 fans were in attendance for West Chester’s first home game of the year on a sweltering hot 94-degree day, and despite the loss, they were able to witness some history. WCU’s 63 passes were the most ever attempted in a game, and they ran their most plays in a game at 99 since they executed a school-record 102 plays back in 1996 against New Haven.

After a non-league matchup with the Fighting Scots, WCU’s contests against the PSAC will commence, as they’ll look to takedown Lock Haven University on Sept. 24, which is Family Day. So save the date and be prepared to cheer on your Golden Rams.

Will “B.J.” Boyer is a third-year student majoring in communication studies with a minor in journalism. He can be reached at WB806695@wcupa.edu.