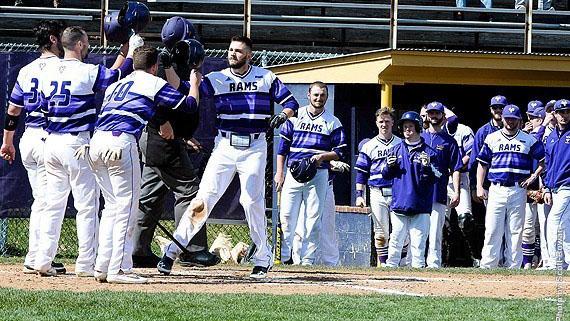 After a 12-4 start to the season, the Golden Rams baseball team hit a bit of a rough patch this week, going 3-5 during a pair of doubleheaders against both Millersville University and Kutztown University.

West Chester opened up the week on Friday, March 25 in Millersville for a doubleheader matchup against the first place Marauders. Millersville was riding a 19-game winning streak coming into the first doubleheader, and they proved exactly why they’ve been unstoppable this season. Scoreless until the third inning, Millersville rattled off six runs in the bottom of the third, and there was no looking back from there. The Marauders went on to score in every inning for the rest of the game before finishing off West Chester in the seventh for a 12-3 victory in game one.

Game two started out as a slightly different story when the Golden Rams climbed out in front to a 4-0 lead in the top of the third. That didn’t last long for WCU, as Millersville knotted the game up in the bottom of the inning 4-4. Still tied in the bottom of the sixth, Millersville’s Tyler Orris rattled off a bases-clearing double that would spark a 10 run sixth inning for the Marauders. That would be all they needed to complete the sweep of West Chester, securing game two 14-4 and winning their PSAC record 21st consecutive game, a record previously held by the 2012 West Chester team. Mitch Stoltzfus, the PSAC’s leading hitter, extended his hitting streak to 21 games during the victory.

The Golden Rams didn’t have to wait long for their chance at redemption, as the Marauders traveled to West Chester the following day for another doubleheader. West Chester led 3-2 heading into the final inning with Millersville’s record-breaking win streak on the line. Dan Stotlzfus blasted a two-out grand slam to give the Marauders a three-run lead 6-3, and West Chester’s comeback fell short in the bottom of the seventh as they fell 6-5. The winning streak extended to 22 games, as did the hitting streak for Stolzfus. In game two, the Golden Rams fell behind early, giving up five runs after one inning of play. Down 6-0 after two and a half innings, West Chester went on to rattle off 14 unanswered runs in the following two innings. Nick Ward singled home Anthony Salomone for WCU’s first run in the bottom of the third. The Golden Rams sent 17 batters to the plate in the bottom of the fourth, scoring 13 runs while facing four different Millersville pitchers. A two RBI double from Tyler Coleman started the run, and West Chester would take their first lead of the game after a Ward triple that scored two for a 7-6 lead. Drew Diehl homered in the inning to help extended the Rams lead to 14-6 after four innings. West Chester wasn’t going to allow a comeback to happen this game, adding three more insurance runs in the sixth to increase the lead to 19-8, the final score of the game. The West Chester victory marked the end of the 22-game winning streak for Millersville, and also ended a three-game losing streak for the Golden Rams. Ward went 5-for-5 in game two, and 7-for-9 on the day, while Andrew Gernert picked up the win on the mound to move to 3-0 on the year.

West Chester hosted Kutztown for a doubleheader on Friday, March 31. Using the wind to their advantage, Kutztown homered five times in game one, three of those coming off the bat of Eric Lane. Nick Bateman was the lone home run for the Golden Rams. The Golden Bears held the lead the entire game, and cruised to a 13-3 victory in game one. West Chester got back on track in game two, battling back from a 6-0 deficit to earn the 8-6 victory. Salomone homered for the Golden Rams to earn two RBI, and Zach Sheranko knocked in three runs of his own. Mike O’Neill earned the victory on the mound for his first win of the season.

West Chester finished off the week on Saturday when they traveled to Kutztown for a doubleheader. The Rams opened up the scoring in the first with a Shane Dressler RBI, but that proved to be the only run they would score for the remainder of the game. Kutztown scored a run in both the third and fifth innings to take the 2-1, a score that would end up being enough for a Golden Bear victory. The Golden Rams got back on track in game two, scoring at least one run in each of the first three innings to climb out to an early 5-0 lead before tacking on two more in the fifth for a 7-0 lead. Kutztown gained one run back in the bottom of the fifth, but that would be the lone KU run in the game as West Chester secured the 7-1 victory in game two. Sheranko went 1-for-3 on the day with two RBIs, while Bill Ford went 2-for-4 on the day with three RBIs, including a home-run. Gernert earned the W on the mound to improve to 4-0 on the season.

Consistent hitting from their top performers continues to be the key to victory for the Golden Rams. Five players have a batting average of .310 or higher with a minimum of 45 at-bats. Sheranko leads the way batting .400 on the season, while Diehl and Ward are tied for second, each batting .344 on the season and batting in 56 and 44 runs on the season respectively. Mike Cipolla leads the way on the mound going 4-2 on the season, while Gernert remains undefeated at 4-0. West Chester moves to 16-9 on the season with matchups against University of the Sciences in Philadelphia, and a pair of doubleheaders against Bloomsburg University this week.

Dylan Harrison is a fourth-year student majoring in communication studies with a minor in journalism.  DH785892@wcupa.edu