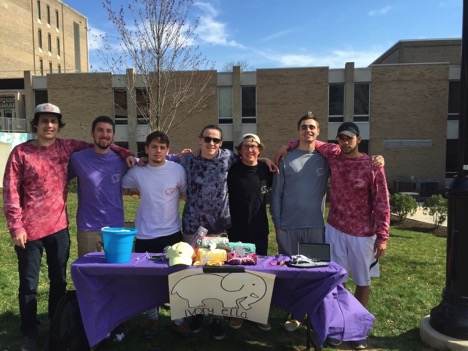 Ivory Ella is a new and growing retail-clothing store that has been in business for a year.

This company’s goal is to provide quality shirts to their loyal customers in an effort to end poaching and save the remaining elephant population roaming the Earth. In their efforts to preserve wildlife, they have teamed up with Save the Elephants to donate 10 percent of their proceeds to the Save the Elephants organization, in addition to other causes.

After Ivory Ella’s success over the summer, the company decided to recruit college students at universities across the country to be representatives and promote their clothing brand.

Although the Ivory Ella group is not an official club on West Chester’s campus, the company has three ambassadors: Jamie Trainor, Tanner Sweitzer and Jordan Wissler, to represent West Chester University. Trainor, Sweitzer and Wissler began being ambassadors and spreading the word about the cause on campus in the beginning of the fall 2015 semester.

On Wednesday, March 23, the Ivory Ella ambassadors were set up for the first time in the academic quad from 1 to 4 p.m. selling raffle tickets, as well as handing out stickers and student discount codes.

Throughout the event, there was a steady flow of student traffic with people constantly stopping by in between classes. One of the campus ambassadors, Trainor, considered the event “a huge success.”

Trainor explained that him, Sweitzer, and Wissler do not intend on making Ivory Ella at West Chester an official group.

“We are fortunate enough to have enough popularity among the student population to continue spreading the word about saving the elephants,” said Trainor.

The ambassadors gained a lot of help from their friends with handing out flyers, passing out stickers, or simply just wearing the shirts around campus to raise brand awareness.

The Ivory Ella ambassadors plan on holding another raffle event and finding other ways to give out shirts and raise awareness.

Trainor mentioned how in the past they donated shirts for basket raffles for Greek life events on campus and held giveaways on Twitter and even hid shirts around campus to be found by students.

While ambassadors don’t consider themselves a group; they encourage everyone to wear Ivory Ella clothing and support the company and the cause they donate too. The ambassadors accept submissions via Twitter, and they said there have been times where WCU students have tweeted pictures of themselves wearing the Ivory Ella brand, and they have retweeted for their followers to see. On other occasions, the official Ivory Ella Twitter account has recognized these students and retweeted our pictures off of their account for 545,000 plus followers to see. Trainor reflected on the event.

“We were overwhelmed by the success and the feedback from the students across campus. We couldn’t have been happier about how our first raffle event went,” said Trainor.

In the future, Trainor, Sweitzer and Wissler want to continue holding raffles and giveaways while coming up with new and creative ways to give away Ivory Ella gear.

In order to stay up to date with the ambassadors, giveaways, and other information, make sure to follow their Twitter @IvoryEllaWCU.

Devin Gerber is a fourth-year student majoring in communication studies with a minor in journalism. They can be reached at DG781831@wcupa.edu