Coen Brothers separate themselves from Hollywood once again with “Hail, Caesar!” 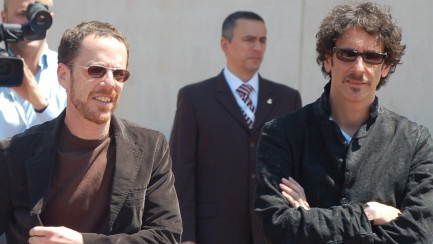 Sitting just a notch below 2003’s battle-of-the-sexes, romantic comedy “Intolerable Cruelty,” the Coen Brothers (“No Country For Old Men,” “A Serious Man,” “Inside Llewyn Davis”) latest star-studded picture,“Hail, Caesar!” failed to find its audience the weekend of Feb. 6, where it made a mere $11.4 million, only half its budget, therefore becoming the directorial-duos second lowest-grossing opening weekend in North America.

This wasn’t unexpected, however, as the subversive comedy takes aim at entertainment entrepreneurs and fat-cat movie companies, the exact studios promoting it, accusing them of issuing assembly line “products” opposed to anything of artistic worth, and is rather unconventional by mainstream standards.

It will also alienate anyone who’s a stranger to the history of the 1950s Hollywood Golden Age to some extent, making it a hard sell for the industry it’s relentlessly mocking. Nevertheless, rarely should a film be judged of its quality by its commercial success, especially one by two of the industry’s most idiosyncratic and genre-busting filmmakers.

In a post-war motion picture industry, Eddie Mannix (Josh Brolin) of Capital Pictures, essentially made to mirror Metro-Goldwyn-Mayer, is a full-time “studio-fixer” whose chief importance is preventing stars and glamour starlets from publicly tarnishing themselves and the company name, all the while fending off meddlesome gossip columnist (Tilda Swinton).

This includes their highest-priced leading man Baird Whitlock (George Clooney), who stands at the forefront of their moneymaking machine and “Ben-Hur”-esque biblical saga, “Hail Caesar! A Tale of the Christ.”

Also in the spotlight is DeeAnna Moran (Scarlett Johansson), an Ester Williams-type whose private life is a bit more scandalous than her “America’s Sweetheart” image suggests.

Moreover, almost every star in “Hail, Caesar!” has a secret “behind-the-scenes” life that directly contrasts the one depicted through the silver screen.

When Whitlock is held ransom, the swords and sandals epic is slowed to a halt, jeopardizing the picture and thus causing Mannix to go on a dreamy, investigative hunt through the empire’s marvelous back lots.

In terms of humor, it’s hard for the Coen Brothers to surpass their 2009 pseudo-spy and existential absurdist comedy, “Burn After Reading,” which is by far their funniest film that, dare I say, outdoes “The Big Lebowski” (1998) in amount of laughs had.

“Hail, Caesar!” has its moments, too, the most obvious standouts being the hopelessly inept, baby-faced Hobie Doyle (Alden Ehrenreich), a strongly accented Western actor without much acting talent, being confronted with the hard-to-pronounce line: “Would that it were so simple…” on the set of a stiff, high-society English drama directed by bully director Laurence Laurentz (Ralph Fiennes).

Also worth mentioning is Channing Tatum as the Gene Kelly-inspired, Burt Gurney, whose overly dramatic, hair-waving head turns are hard not to gauff at. Tatum is quickly becoming the go-to guy to cast as a handsome, aloof idiot. His little dance number “No Dames” is quite a sight to behold.

The Coens are known for, more often than not, working within a theological framework. It’s no exception here, made most apparent by a scene of four different religious figures: a rabbi, a Protestant minister and two priests, one Catholic and the other Orthodox, sitting in a boardroom with studio-fixer Mannix trying to figure out how to depict an on-screen Christ without offending each other, which is one of the film’s highly comical scenes.

Like so many of the Coens’ films before, profound philosophies and themes are hidden in seemingly insignificant stories. Man’s search for meaning amidst the absurdity of existence is played with willingly, which was once taken extremely seriously in the hauntingly dour “No Country For Old Men.” Now that movie has somehow turned into a joke in recent years.

From the Coen Brothers’ perspective, we may all very well be doomed, but there’s comedy in that apparently. Clooney’s overplayed facial expressions when first encountering the divine exemplify this perfectly. Our search for something grander has become a punchline.

The only noticeable worriment with “Hail, Caesar!” is how utterly disjointed it is, which is substantially more so than any of the Coens’ films that have come before it, similar to last year’s “Inherent Vice” from Paul Thomas Anderson and based on the novel by Thomas Pynchon. That film jumps around voluntarily, abandoning plotlines and dropping main characters at random. I expect this inconsequential and seemingly hopeless approach from the Coens, but not to this magnitude. While I endorse “Hail, Caesar!” for die-hard Coen fans, it’s easy to see why it won’t appeal to everyone. It’s frustratingly incoherent meandering goes unchecked a bit too far, resulting in some highly memorable scenes in a slightly less than memorable but still watchable Hollywood Babylon caper. In any case, Joel and Ethan Coen have made a film that, without a doubt, cast itself out from the Hollywood cash cow system they’re critiquing and so desperately opposed to.

Rob Gabe is a fifth-year student majoring in communication studies. He can be reached at RG770214@wcupa.edu.