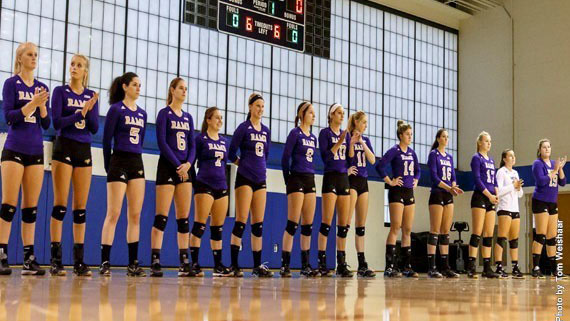 After a clean sweep of Lock Haven University, West Chester University’s women’s volleyball team clinched the No. 3 seed in the PSAC tournament, and were pitted against the No. 2 seeded Shippensburg Red Raiders in the tournament’s opening act.

WCU and Shippensburg split their two-game regular season series, with the Lady Rams sweeping the Red Raiders in their Oct. 9 matchup before being dealt a defeat by the hands of Shippensburg on Nov. 7 in Hollinger Field House. West Chester looked to mimic the blueprint that was spawned in their first contest against the Red Raiders, and that template almost landed them in the winner’s circle.

Shippensburg raced out to an early 10-2 lead as they capitalized on a slew of West Chester’s errors, and the margin proved to be insurmountable for the Lady Rams. The resilient Rams gave a valiant comeback effort in the waning seconds of the set, rattling off four straight points before the Red Raiders closed the deal on a WCU attack error.

West Chester’s undoing in the final period can be accredited to their inability to register an efficient hitting percentage, as they were held to -0.192 percent. Shippensburg didn’t lodge a gaudy percentage either, but they were able to record a respectable 0.143 percent.

Molly Grammar paced WCU with 22 kills, with Samantha Agostini adding 10 and Marina Sharkey chipping in with eight. Jillian Grammar, just as she’s done all season long, did the bulk of the table setting in this one, dishing out 33 assists to her teammates. Grammar did, however, leave the match in the fourth set with an undisclosed injury, and she did not return.

Annalee Halbert also had eight helpers, and Bethany Gould rounded out the bunch with two.

Gould (19) was also in the top-two in the digs department, trailing only Nicki Yates, who recorded a team-high 32. Lyndsey Iacobelli added 13 digs of her own, but all of these statistics were for naught as WCU’s late faltering down the stretch prevented them from advancing to the PSAC Quarterfinals.

Despite the loss to Shippensburg, optimism still swirls in the sky for the Lady Rams, as they hope to be granted their first ever trip to the national tournament by the NCAA Selection Committee on Monday.
West Chester is currently ranked eighth in the latest NCAA Atlantic Region Poll, which was issued on Wednesday, Nov. 18., which is up from the No. 10 ranking they had been receiving for most of the year. This marks their first appearance in the poll since 2007, again illustrating how successful this campaign has been for Head Coach Kassie Bellaver and her Lady Rams.

The NCAA uses the Regional Poll to deduce which teams from specific regions are worthy of qualifying for the NCAA D-II Women’s Volleyball Tournament, with the top eight squads receiving tournament tender.
WCU hopes to continue their season, and their fate will be determined by the selection committee as they will unveil the tournament’s participants during a live selection show on Monday at 7:30 p.m. The show can be viewed live on NCAA.com, and the Lady Rams hope they have afforded the opportunity to continue their magical year, one in which they’re three wins shy of West Chester’s single-season wins record of 28.

If the Lady Rams were to be granted a tournament berth, it’d mark the first time in school history that the women’s volleyball team has qualified for the tourney.

If WCU isn’t selected to partake in the tournament and they are relegated to a spectator role, disappointment will loom, but the girls have every reason to be ecstatic about what they have accomplished this season. They established a legacy as one of the better volleyball squads in school history, and failure to clinch a postseason berth should not undermine that. Rather than belittle their accolades, it just serves as a testament to the handful of talented teams out there looking to extend their campaigns.

In addition to NCAA Tournament hopes, two of WCU’s players received notable accolades during the week.

Sisters M. Grammar and J. Grammar were named to the 2015 All-PSAC Eastern Division team, recognized for their strong play throughout the season. M. Grammar notched 490 kills this season, bringing her to an average of 4.62 kills per set (fourth in the nation), both team highs. She fell two kill attempts shy of West Chester’s single-season record. M. Grammar’s performance this season will go down in the history books as one of the most impactful ever from a transfer student in West Chester history.

J. Grammar averaged more than 10 assists per set (second in the conference), and she recorded 1,075 set assists on the season. She will be relied on next season as one of the key returners in the Lady Rams lineup for 201.

Whether or not these girls are annointed “tournament worthy” is irrelevant. They should be commended for playing their hearts out and maximizing their potential to become a respected opponent.