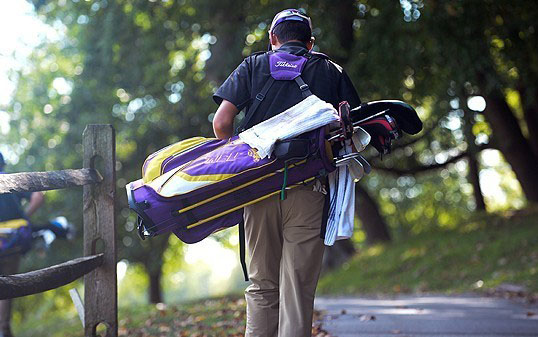 As the Fall Golf season for men and women comes to an end, let’s take a recap to look over how their season stood. The men had a total of 3 invitationals against opponents Urbana placing 1st with a total score of 612. They also were a part of a tournament Glade Springs Intercollegiate championship, placing 2nd place overall. The Golden Rams were also a part of the California Vulcan Invitational this past Monday and Tuesday and overall placed 4th. The women also had three matches against the Michael Corbett Fall Classic and the Lady Rams placed 4th overall in the classic. The Golden Rams also participated in the Ohio Valley Fall Classic, placing 3rd behind Millersville and Kutztown. Finally the Lady Rams last meet before the PSAC championships was the Kutztown Fall Invitational, where they ended up finishing in 3rd place.

Starting off with the Lady Rams invitational at Kutztown, Taylor Daskivich placed fourth individually to lead West Chester University’s women’s golf squad to a third place showing at the Kutztown Fall Invitational at the Moselem Spring Golf Course this past Monday afternoon. West Chester posted a cumulative score of 687 to fall in behind team champion Millersville (662) and runner-up Kutztown (678). The Lady Rams now get ready for the PSAC championship starting on Oct. 17 and ending Oct. 18.

Swinging into the men’s last invitational at California Vulcan, the Golden Rams golf squad placed fourth overall in the team standings at the Vulcan Invitational hosted by Lone Pines Country Club Tuesday afternoon. WCU shot an identical 303 on day two, matching its day one total, to finish the tournament with a score of 606. Indiana (Pa.) and Millersville each finished with a 600 for the tournament to tie for first place. The Marauders won the playoff to take home the team title. Host California (Pa.) was third with a 601 score. The men will head to the PSAC Championships this weekend to defend the conference crown that it won last fall at The Links. We wish them the best of luck again and hope to see a repeat performance.

I managed to get in contact with Golf’s Men’s head coach Harry Hammond and asked him four questions about the upcoming spring season. My first question I asked was him was, “How will you prepare for the Spring Season?” “Preparing for the spring golf season begins immediately after the PSAC Championship tournament which is held this weekend at the Hershey Country Club East Course. The trainer for the golf team meets with the team and initiates a golf specific training program over the off season,” Hammond said.

“The Spring season begins with our spring break and WCU schedule includes several days of practice and a tournament during the break,” Hammond stated. I also asked, “How do the players get ready for the big invitationals?” “The sport of golf is slightly different in that we are a team representing the university, but within the team, each player plays the golf course as an individual and at the end of the day we total four low scores of the five players to determine our finish in the tournament. The players prepare for the tournament working on their weaknesses in scoring which are identified by their keeping what we call stats from each round,” Hammond said. ‘Finally the team has had success with their fall schedule and I believe they will do well this spring. Our success is measured by positioning ourselves through past tournaments to be invited to the NCAA Regional tournament in May. This year’s NCAA Regional tournament will be in Syracuse NY. We have competed in that event for the last four years,” Hammond stated.

Marcelus Council-Jones is a fourth-year student. He can be reached at MC785844@wcupa.edu