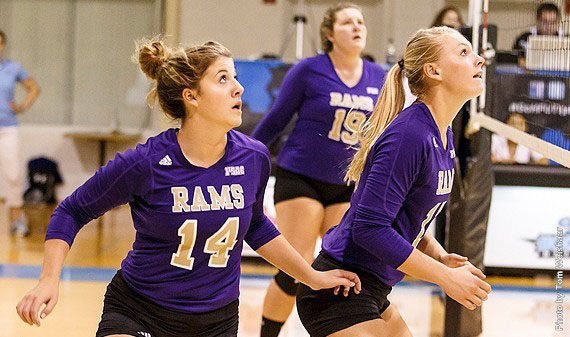 When asked what type of mindset the Lady Rams had to adopt in order to have a successful weekend at the PSAC East Crossover in East Stroudsburg Pa., right-side hitter and senior Samanta Agostini stated, “Going into this Crossover, I think our team is more prepared. We know that every game is going to be tough. We know that we have to go hard from the first point of the first game to the last point of the last game to get the wins.”

On Friday, the West Chester University Women’s Volleyball Team (18-5, 6-5 PSAC) dropped their first contest to Gannon University (15-4, 8-2) by virtue of a 25-22, 25-16, 25-22 sweep, but the resilient Golden Rams exhibited the aforementioned ferocity by ending the first day of the Crossover with a triumphant ‘come from behind’ victory over Mercyhurst University (11-11, 6-5), notching three straight sets over the Lakers after dropping the first two.

This season, West Chester has been known as a juggernaut defensive team that flummoxes opponents with their predatory-like tactics on that side of the ball. During WCU’s most recent six-game win streak, opposing teams’ methods of attack were altered by the Lady Rams’ pristine defensive execution, with many of the squads registering ugly hitting percentages. Against Gannon, this was not the case, as they managed to record a .279 hitting percentage, including .455% in the second set.

Meanwhile, WCU struggled to find a rhythm offensively, as it was Gannon’s strong defensive outing that tilted the match in their favor. The Lady Rams put up an unusually low .107 hitting percentage, including an uncanny .059 in match’s final frame. Molly Grammar led the way for West Chester with 16 kills, and both Victoria Cruciani and Allie Duffy were behind her with 3. Jillian Grammar’s 32 assists led the Lady Rams, and she also added 8 digs, but Nicki Yates did her usual damage in the dig department, as she put up a team-high 19. Bethany Gould also added 8 digs of her own.

At the commencement of their match against Mercyhurst, it appeared as if West Chester was headed for another disappointing loss, but the girls were able to stave off defeat as they rebounded from a 2-0 set deficit (27-25, 25-18,) to come back and top the Lakers, taking three consecutive sets 30-28, 25-21 and 15-0 to clinch the match 3-2. Could WCU’s rough outing at the PSAC West Crossover, coupled with their loss in the East Crossover’s first match have fueled the comeback victory over Mercyhurst? Agostini seems to think so; “I think we developed a new drive. We do not like to lose.”

M. Grammar again led the way with 19 kills against Mercyhurst, with both Cruciani and Abbie Dischert adding 8. J. Grammar’s orchestration skills were virtuosic in this matchup, as she totaled 49 assists. She also added 4 blocks, with Agostini notching 5 and Cruciani 9, as West Chester’s defense resembled the steamroller we’ve grown accustomed to seeing throughout this season, holding Mercyhurst to a .095 hitting percentage. In addition to the blocks, the Lady Rams managed to rack up in the dig division as well, with Yates (27), Lyndsey Iacobelli (14), and Gould (13), combining for a total of 54 digs against the Lakers.

The Lady Rams gave an intrepid effort against the Edinboro Fighting Scots, but it proved to be for naught as they were swept in three sets 25-13, 25-22 and 25-15. WCU was limited to just a .048 hitting percentage, while the Fighting Scots boasted a much more robust .253 hitting percentage. M. Grammar headed West Chester with 12 kills, followed by Duffy with 4 and Cruciani with 3. Duffy also pitched in with 2 aces, trailing only Callie Krajcir’s team-high of 3. Krajcir also led WCU in digs with 13, with Yates and Annalee Halbert adding 11 and 7 respectively.

With the prospect of another unsuccessful Crossover expedition looming, the girls fixated their minds on escaping with at least a .500 record on the weekend. They were afforded this opportunity against a struggling Slippery Rock team, and it was a moment they made sure to seize.
WCU took down Slippery Rock in three sets, sweeping them 25-18, 25-18 and 25-21. M. Grammar was again the leader in the kills department with 20, with Cruciani and Agostini adding 8 and 6 respectively. J. Grammar was the assist leader with 41, and Yates again governed the digs category with 27, with Halbert and Krajcir coming up with 8 and 7 respectively.

This week on the horizon for WCU is road games at Lock Haven University (14-9, 6-6) and the University of Pittsburgh at Johnstown (18-3, 11-1). The Lady Rams will finally be returning home from their lengthy 21-game road trip on Oct. 30, as they’ll square off at home against Kutztown University. When asked if what kind of effect, if any, being away from home for so long had on the team, Agostini contended this: “I think not having a conference home game yet just makes the team excited for when we can finally host a game that our fans can come to. All of the parents have been doing a great job making the efforts to follow our team around to the away games. We have a great support system.”