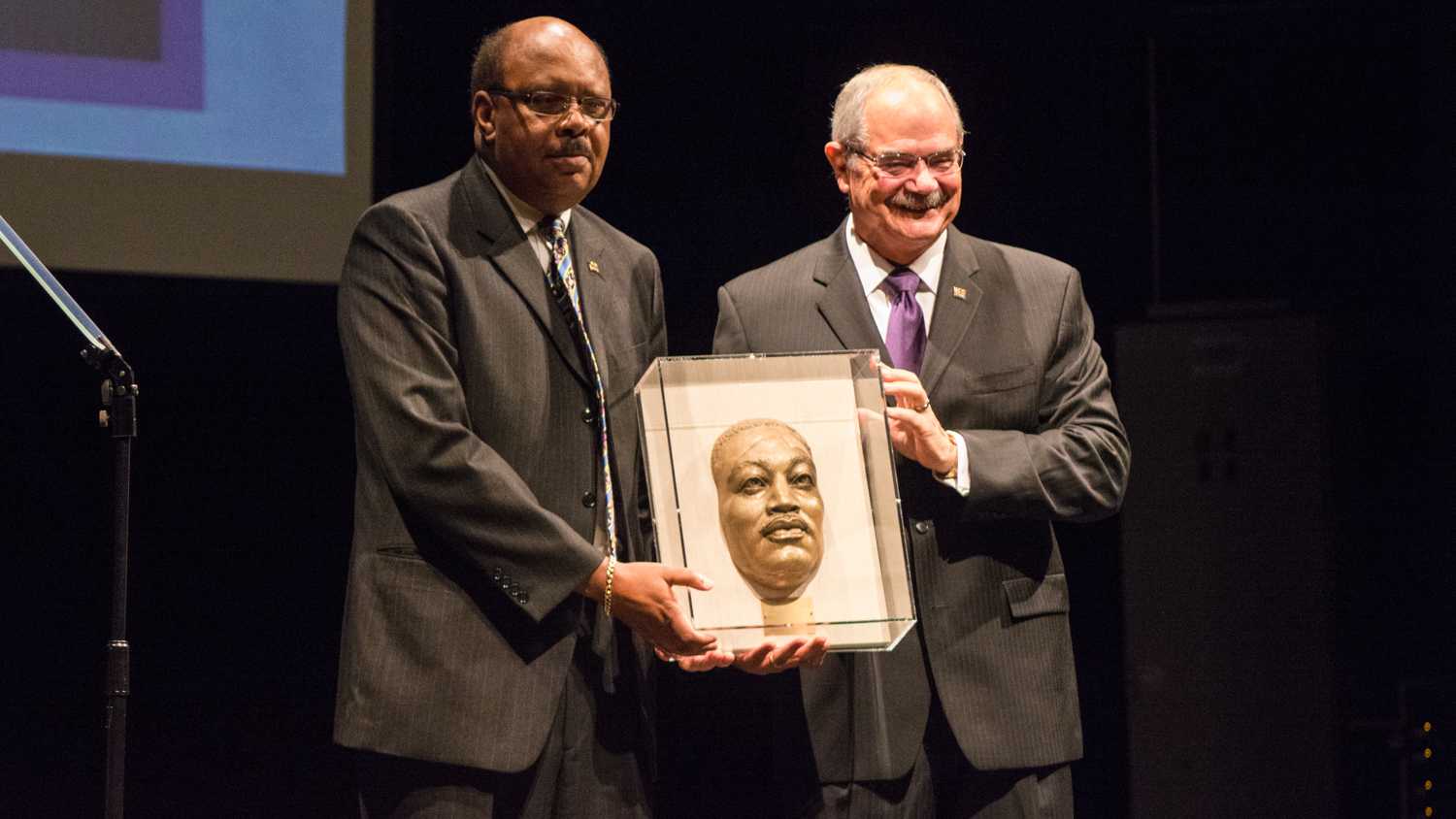 On Thursday, Oct. 1, President Greg Weisenstein announced his retirement during the annual State of the University address in Emilie Asplundh Hall. His last day will be Thursday, March 31, 2016.

Weisenstein alluded to his retirement as the address began. Many in the audience were aware of the possibility of such an announcement.

Before announcing his retirement nearly a half-hour into the address, Weisenstein said, “It’s time to talk about the future – mine and the university’s.” He explained that he and his wife were ready to retire and check some things off their bucket list.

Weisenstein discussed plans for the future of the university, both before and after his retirement.

He explained that he believes the university is in good hands, and he expressed that there are cabinet members, department chairs, and others who will be leaders in the campus community.

For many in the campus community, this raises the question of who will take Weisenstein’s place as the university’s president.

Kenn Marshall, the Media Relations Manager for Pennsylvania State System of Higher Education (PASSHE), explained that it could be anywhere from six months to a year before a new permanent president is instated.

Initially, an interim president will be appointed by the board of governors, who will have consulted with the university.

According to Marshall, because of the advance notice, this person will likely be named prior to Weisenstein’s actual departure.

The interim president will likely also be the person making tenure announcements in May.

“The process of deciding upon tenure and notification of the tenure decision will be conducted consistent with the current APSCUF collective bargaining agreement,” President Weisenstein explained via email. “The President, whether acting, interim, or permanent, will notify the candidates of the positive or negative decision made with respect to their tenure application.”

After the interim president is appointed, a search committee will form, Marshall explained. The Council of Trustees will appoint the search committee, which will include faculty, alumni, trustees, students, and more.

The search committee’s first job will be to develop a job description, which will include a description of what they want the new president to be like. Then, they will advertise for the position in a national search and recruit candidates to apply. Typically, the university will hire a professional firm and have an executive search consultant.

According to Marshall, the committee will then conduct interviews, and three to five of the top candidates will complete campus visits. Eventually, the search committee will recommend two final candidates, who will be approved by the Council of Trustees.

These candidates will be submitted to the board of governors, who will conduct the final interviews, Marshall said. They will then appoint the new president of the university.

Overall, that entire process could take up to six months. According to Marshall, the new president would normally not begin until the start of the fiscal year, which is July 1.

Weisenstein’s final State of the University address did not just focus on his retirement. He also discussed the many positive aspects of the university, citing the stellar academic programs, record-breaking graduate enrollment, high athlete average GPA, and more.

Kiplinger Magazine ranked WCU the 14th best value among universities in the entire country with tuition under $30,000. Weisenstein said that this ranking expresses both quality and economic value.

He also made a point of stating that over 20,000 students apply each year for the honor of attending WCU.

West Chester is a cultural center in Chester County, he explained. Weisenstein said that the performing and visual arts at WCU are “among the best in the country.”

Weisenstein acknowledged the work that the WCU coaches do. The combined GPA average of athletes at WCU is above a 3.0.

The Office of Service-Learning & Volunteer Programs reported over 812,000 service hours completed in the past year.

Weisenstein was particularly proud of the highest graduate school enrollment in the history of WCU, which was 2,295 students.

WCU also has a commitment to environmental sustainability and reducing its carbon footprint.

“West Chester University is a place where we care about each other,” said Weisenstein. “Like most families, we don’t always agree with each other, and from time to time, we exhibit that disagreement, however, as a campus community, we’re committed to stability and respecting the differences that make each of us unique.”

Weisenstein made a point of expressing pride in the university and said, “WCU is the place where students come first. It is an institution that truly places students above all priorities.”

In addition, he mentioned the new budgeting process that was designed 18 months ago to improve transparency.

“West Chester University has been an exceptionally good steward of the public’s money,” Weisenstein said.

Weisenstein thanked the staff who had worked with him over the last few years.

Before the State of the University address concluded, Weisenstein also presented the 2015-2016 West Chester University civility award to Larry Dowdy, a former colleague and close personal friend who worked as an executive deputy to the WCU president for around 34 years.