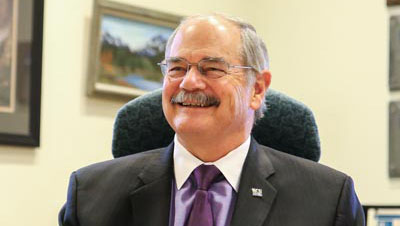 On Oct. 1, President Weisenstein announced his retirement during the “State of the University” address in Emilie Asplundh Hall. His last day will be March 21, 2016.

Weisenstein alluded to his retirement as the address began. Many in the audience were aware of the possibility of such an announcement.

He went on to discuss the many positive aspects of the university, citing the stellar academic programs, record-breaking graduate enrollment, high athlete average GPA, and more.

Kiplinger Magazine ranked WCU the fourteenth best value among universities in the entire country with tuition under $30,000. Weisenstein said that this ranking expresses both quality and economic value.

He also made a point of stating that over 20,000 students apply each year for the honor of attending WCU.

West Chester is a cultural center in Chester county, he explained. The performing and visual arts at WCU are “among the best in the country,” Weisenstein said.

Weisenstein also took note of the successful athletic teams at WCU. The athletic program has won the Dixon Trophy for the second time in three years, honoring it for being one of the top athletic programs in Pa. Weisenstein acknowledged the work that the WCU coaches do. The combined GPA average of athletes at WCU is above a 3.0.

The Office of Service-Learning reported over 812,000 service hours completed in the past year.

Weisenstein was particularly proud of the highest graduate school enrollment in the history of WCU: 2,295 students.

WCU also has a commitment to environmental sustainability and reducing its carbon footprint.

“West Chester University is a place where we care about each other. Like most families, we don’t always agree with each other, and from time to time, we exhibit that disagreement, however, as a campus community, we’re committed to stability and respecting the differences that make each of us unique,” Weisenstein said.

Weisenstein also made a point of expressing pride in the university and said, “WCU is the place where students come first. It is an institution that truly places student above all priorities.”

Weisenstein said, “It’s time to talk about the future – mine and the university’s,” before announcing his retirement. He explained that he and his wife were ready to retire and check some things off their bucket list.

Weisenstein discussed plans for the future of the university – before and after his retirement. He explained that he believes the university is in good hands, and he expressed that there are cabinet members, department chairs, etc. who will be leaders in the campus community.

He made a point of mentioning the new budgeting process that was designed eighteen months ago to improve transparency. “West Chester University has been an exceptionally good steward of the public’s money,” Weisenstein said.

Weisenstein thanked the staff who had worked with him over the last few years. Weisenstein had become the university’s fourteenth president on Sept. 25, 2009.

Before the event concluded, Weisenstein also presented the 2015-2016 West Chester University civility award to Larry Dowdy, a former colleague and close personal friend who worked as an executive deputy to the WCU president for around 34 years.