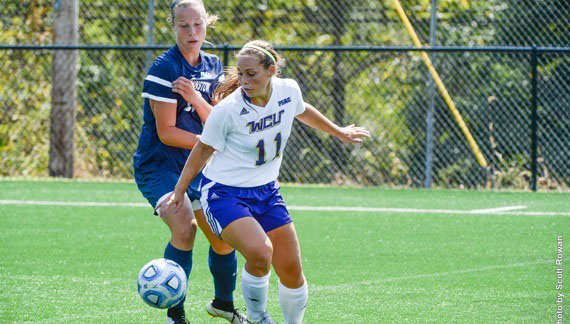 After falling to Gannon University on Saturday 2-1, the West Chester woman’s soccer team bounced back in a tough matchup against PSAC rival Kutztown, downing the Bears 1-0 on Tuesday afternoon in West Chester.

The Golden Rams (4-1, 4-1 PSAC) outlasted the Bears, scoring their lone goal in the middle of the second half when Scarlett Walsh corralled the rebound and buried it into the back of the net for her second goal of the season and the deciding goal in the game.

Transfer sophomore Tayler Jamison received a pass from Haley Mangiaruga behind the Kutztown defense, which allowed Jamison to drive the ball up the left side of the field, streaking towards Kutztown’s endline, where she delivered a perfect cross into the box towards a group of waiting Lady Rams.
A collision occurred between West Chester’s forwards and Kutztown’s goalie, allowing the ball to lay waiting at the six yard line, right where Walsh was crashing from her defensive center midfield position, when she delivered the strike to put West Chester in the lead.

“It was pretty exciting,” said Walsh. “Kutztown is one of our rivals and it’s always an emotional game for us.”

After Walsh’s goal, Kutztown took to the offensive, looking to even the game at one a piece, but West Chester’s defense proved yet again why they are one of the toughest in the nation, answering the Bear’s onslaught and recording their third shutout of the season. Goalkeeper Alex Srolis notched three saves for the Rams in the victory.

“The last time we played Kutztown was in the quarterfinals of the PSAC tournament last year, and we lost,” said Srolis. “We were highly motivated and we knew we had to come out and work hard to beat Kutztown.”

The win over Kutztown came a game after the Lady Rams suffered their first loss of the season on Saturday, Sept. 12, when they traveled to Erie to take on No. 15 Gannon. At the time the Rams were ranked No.5 in the nation, but after the loss they dropped to No. 16.

The conditions were less than ideal, as both teams had to deal with torrential downpours and a puddle-ridden field.

“We couldn’t really pass the ball or it would die in a giant puddle,” said Jamison. “All we could do was kick it forward and try to attack.”
Gannon took a free kick in the first half which hit the top of the crossbar and looked to be going out of bounds, but it deflected back into play, where a Gannon striker was waiting, putting the Golden Knights on top 1-0.

Gannon extended their lead early in the second half when a shot was launched from over 30 yards out, over the head of Srolis and finding the back of the net. West Chester rallied late, notching a goal in the 82nd minute off the foot of Lexi Brown, but it was too little too late as they went on to lose the game 2-1.

“It was a tough loss losing to Gannon, but that only made us more motivated for the rest of our season,” said Mangiaruga. “We played as hard as we could. Unfortunately the outcome didn’t go our way.”

“We can’t wait to play them again,” added Jamison.

West Chester will not get that chance during the regular season, but as long as the season continues to progress the way that it has been going, both teams should make solid runs in the PSAC tournament, where they will likely faceoff again. However, success in the PSAC tournament is not the only goal the Lady Rams have for themselves.

“The team’s goal for this season is to be in the final four and to win a national championship,” said Walsh. “We are still angry and motivated from our loss in the elite eight last year and we are coming back stronger than ever.”

Head Coach Betty Kempf agrees that the team is self-motivated, and they showed that attribute after the loss against Gannon.
“Not a whole lot had to be said as our players are very competitive,” said Kempf. “My only concern was coming off a very long weekend in Erie with rain, wind, and not returning until 5 a.m. on Sunday morning.”

The team used the two days between their return and their game against Kutztown to recover, showing their perseverance and ability to withstand adversity by beating a solid Kutztown team.

The Golden Rams dropped another tough game on Saturday against California University of Pennsylvania, 1-0.

It was a game where the Golden Rams outplayed their opponent but could not come away with the victory. One of only three shots on goal for California (Pa.) was able to find the back of the net when Daniela Dell’Aquila fired it from 30 yards out and curved it into the net in the upper left hand corner right over West Chester’s goalkeeper Alex Srolis.

West Chester fought hard the rest of the game but the scoring opportunites just were not converted. West Chester had seven shots on goal to California’s (Pa.) three, and had 14 total shot, twice the number of shots California (Pa.) was able to muster up.

West Chester should not be discouraged. They played a good game against a very good team and the ball just didn’t bounce their way on Saturday. They will look to bounce back on Wednesday when they take on Mansfield University on the road with the game scheduled to begin at 2:30 p.m.

Billy Reardon is a fourth-year student majoring in communications with a minor in journalism. He can be reached at WR783095@wcupa.edu