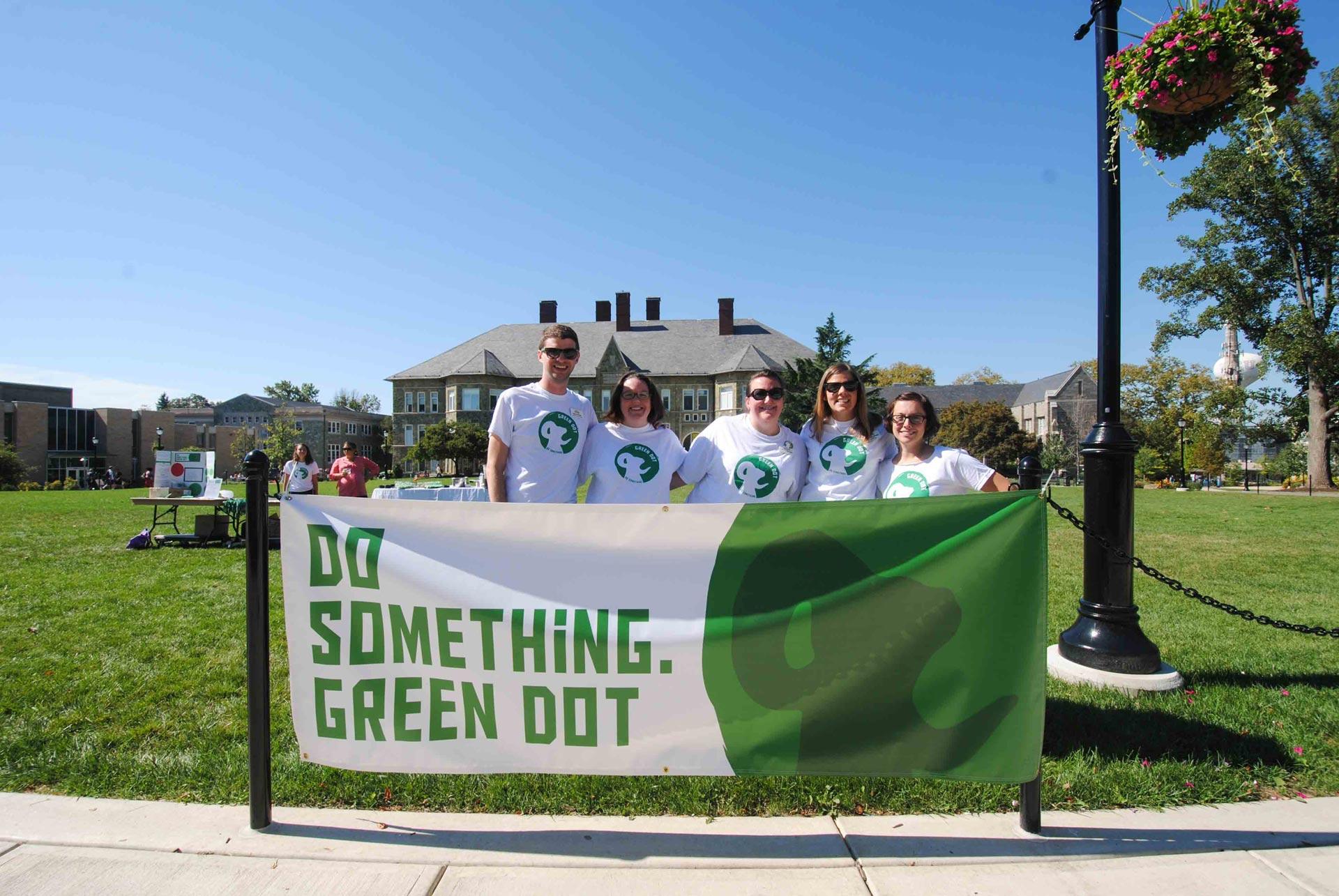 In order to fight back against power-based violence, a new program called Green Dot has been introduced to West Chester University. Green Dot Day took place on Thursday, Sept. 17 from 11 a.m. to 3 p.m. in the academic quad.

Students and staff who had already completed the Green Dot bystander training hosted the event, which featured several different activities.

There was a large version of Jenga. Some blocks had potential scenarios about violence written on them, and people who drew them had to explain how they would react to the scenario. For the blank blocks, people had to talk about how they could be proactive in preventing violent acts from happening on campus.

Another activity was water pong, which was similar to Jenga in that participants in the game discussed how they would handle a situation involving violence.

They also played a human version of Hungry Hungry Hippos. During this game, people split into pairs and had to compete against each other. Whoever collected the most green balls won, while red balls took points away from the overall score.

Alicia Hahn-Murphy, Director of the Women’s Center, is the person primarily responsible for introducing the Green Dot program to West Chester.

“We’ve been working on this probably for two years now,” said Hahn-Murphy. “There’s a four-day institute where you learn how to do Green Dot on the campus and really work on what our plan for our campus will be. So all last year, we were working on that plan and trying to get key students on campus trained so that when we went public this fall, there was already a number of students who were influencers on campus and already knew about Green Dot.”

“When we think about our violence prevention work, what we’ve been doing forever isn’t working, obviously,” said Hahn-Murphy. “The numbers aren’t changing, so the great thing about Green Dot is that it gives everyone a place in violence prevention.”

She mentions that at each bystander training they’ve hosted so far, “90 percent of the room knows somebody or has themselves been affected by some form of violence.”

“I think that number just tells me a lot of us-90 percent of us-on this campus have that in common,” said Dr. Hurt. “People who maybe never do anything else or are never involved in campus are willing to get involved in this because it’s something that’s so personal to all of us.”

According to Hahn-Murphy, the university helped in starting Green Dot.

“Everybody was ready to do something different, so we received a University Forum Grant and support from the Division of Student Affairs to send our first four people to training,” said Hahn-Murphy.

Camdyn Thompson, who is a peer educator at the Women’s Center, appreciates the Green Dot program.

“It was something that was really encouraged to me both through the Women’s Center and also my fraternity, Sigma Phi Epsilon,” said Thompson. “We have a big push for it as well because we think that we need to have a stronger defense against sexual assault and those kind of things here on campus.”
Thompson is determined to “take the right steps” to see Green Dot make a positive change on campus.

“[West Chester] is my little world that I live in, so I want to see the change start here,” said Thompson. “I refuse to not be a driving force behind it.”

“I definitely learned that you can do something to stop rape from happening, or sexual assault or stalking,” said Cumberbatch. “There’s different methods you can take to stop a red dot from happening.”

Allie Fonseca, a peer educator at the Office of Wellness Promotion, explains the meaning of red dots and what they represent.

“Whenever there’s a timely warning, that symbolically puts a red dot on our campus’s map as an act of some sort of power-based violence, which varies from sexual harassment, assault, rape, things like that,” said Fonseca.

According to Dr. Hurt, at the trainings, they “cover this idea of what it means to be a bystander.”

“As bystanders, we’re all different, and so what are our kind of limits? What are we willing to do to intervene?” said Dr. Hurt. “We especially learn how to recognize what red dots are, and then ways to respond to those, what we could call reactive green dots, and then we also learn about proactive green dots, which are ways to help prevent red dots in the first place.”

Senior international relations and German student Allison Weaver is one of many students who hopes to get ininvolved with Green Dot.

“I think it’s important because I know that one in five women in colleges are sexually assaulted while they’re in college, and that’s way too high of a number,” said Weaver. “It should be zero. I’m all for causes that go against preventing that. I think there should be more things like this.”

Sophomore premajor student Kendra Highlands also plans on attending a Green Dot training because she “hates getting those [timely warning] emails as much as the next person does.”

“I didn’t really know what [Green Dot] was, then I read about it and was like, ‘Hey, this sounds important, I’m going to go through with this,’” said Highlands. “I can at least help myself feel safer and maybe help other people feel safer.”

Cumberbatch believes that the Green Dot program has the opportunity to succeed.

“If we all come together and work together, we can all put a stop to to red dots and eventually just be a campus full of green dots,” said Cumberbatch.

The next Green Dot training, which you can sign up for via OrgSync, will take place on Friday, Oct. 9 and Friday, Oct. 16 from 4:30 to 9:30 p.m. You can follow Green Dot on Twitter @wcugreendot and like them on Facebook at WCU Green Dot.

Casey Tobias is a second-year women’s and gender studies student. She can be reached at CT822683@wcupa.edu. Her Twitter is @Casey__Tobias.