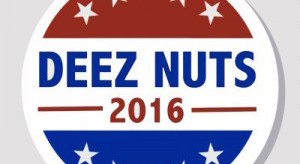 When Deez Nuts trended on Facebook on Aug. 21, I read the articles. A 15-year-old boy from Wallingford, Iowa was running a semi-legitimate campaign for president. In a poll run by Public Policy Polling, he gained nearly ten percent of the votes in some states– an unprecedented amount.

I saw the email address at the bottom of the website (deeznutsforpresident2016.yolasite.com) and contacted Deez Nuts, whose actual name is Brady Olson. I asked for an interview via email and literally a minute later, I received a response: “Fine by me.” No signature, but to be fair, he is only 15 years old.

Deez Nuts is actually an internet meme. The boy behind the name is Brady Olson, a high school sophomore from Iowa. His father is a farmer.

In his spare time, Olson said he enjoys playing basketball, golf, and baseball. He did not respond to the question regarding his future college ambitions, but he is only 15, so that is fairly expected.

When asked what inspired the bold move to run for president, he said, “A comment and an FEC form.” The comment presumably came from a friend, and the FEC form refers to the Federal Election Commission.

He thought running for president “would be fun.” As a 15-year-old trending nationwide on Facebook, that is likely a fair guess.

Deeznutsforpresident2016.yolasite.com is the official campaign website for Olson he created himself. The second page is gaining likes by the minute as the story gains traction in the mainstream media.

Though some are treating the story as a joke, Olson has clearly done his homework on some issues. His platform on his website covers illegal immigration, federal budget and government spending, abortion, same-sex marriage, foreign policy, energy, economy, and territorial voting rights.

On immigration, his site states, “I believe that anyone who is found as an illegal immigrant in this country must be deported back to their country of origin, with the lone exception of being a minor.”

His most unique platform view comes under “Territorial Voting Rights,” as he supports giving citizens in the American territories voting rights. This simply isn’t an issue in most mainstream politicians’ campaigns.

His parents have spoken in the mainstream media about the campaign now, and Olson said his friends and family “are amazed it has made it this far.”

It didn’t take long before the media caught on, after all. He got his first emails for interviews two days after he filed. Now, a month in, social media is taking notice and so are political figures. The founder of the “Rent Is Too Damn High” party has officially endorsed him.

Olson plans to continue the campaign for as long as possible. “Hopefully I can see it through,” he said.

When asked why he chose the name Deez Nuts, Olson responded, “You wouldn’t be talking about it if it weren’t for Deez Nuts.”

His campaign gains traction from social media and its uniqueness, but as a 15-year-old, he won’t actually be able to run for president, much to the dismay of some of his followers.