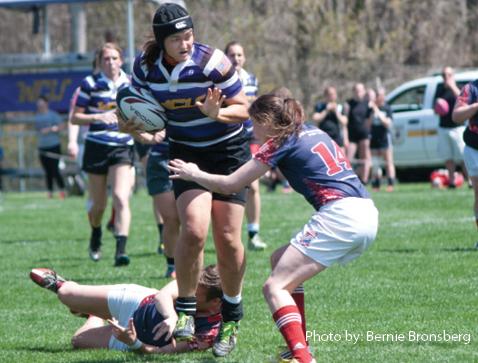 A journey that had started over seven months ago has come to an unfortunate end for the women’s rugby team.

For the second straight season the women’s rugby team fell in the Division I national semi-final. Last year they lost to eventual champion Penn State. This year they fell to BYU in the semi-final by a score of 56-18.

West Chester has nothing to hang their heads about, the women on the rugby team played a wonderful season under head coach Tony DeRemer.

They finish the season with a record of 12-4, and a number four ranking in the nation at the end of the season that started so long ago in September.

The Golden Rams were led by senior fullback Nicole Benedetti. Benedetti is an all-time great at West Chester as she is in the top 5 in tries, total matches played and total points in West Chester school history. She will be missed next season as the Lady Rams try to make it back to the national tournament.

The team started the season off on a stretch that seemed unreal. The team outscored their first five opponents by a combined score of 400-10. They defeated Temple University, Kutztown University, University of Pittsburgh, and the University of Maryland.

Their first loss of the season did not come until November, almost two months after the season started.

Their first loss came at the hands of Quinnipiac University by a score of 36-17.

After the loss, they bounced back with four straight wins against good competition. Again they were playing at an unreal level.

The rugby season is broken up into two parts. The first part is played during September through November, and then they take a four month break until the spring season begins.

The USA National Tournament is the biggest that women’s rugby has, and it is what the team has been playing for all season.

In the first round of the USA Tournament the Golden Rams defeated James Madison University 82-0 behind Aalea Ray’s 28 points.

Next round they faced the University of Virginia where their defense again really showed up winning 28-9.

After defeating Harrisburg’s women’s club team in the next round, West Chester advanced to the final four but their journey for a championship fell short.

They will do everything they can to be back in the tournament next year but try to win it all next year. They will need to fill the void that Benedetti abscense creates.

Ryan Calpin is a third-year student majoring in communications with a minor in journalism. He can be reached at RC784188@wcupa.edu.