Golden Rams jump to no. 2 in Atlantic Region 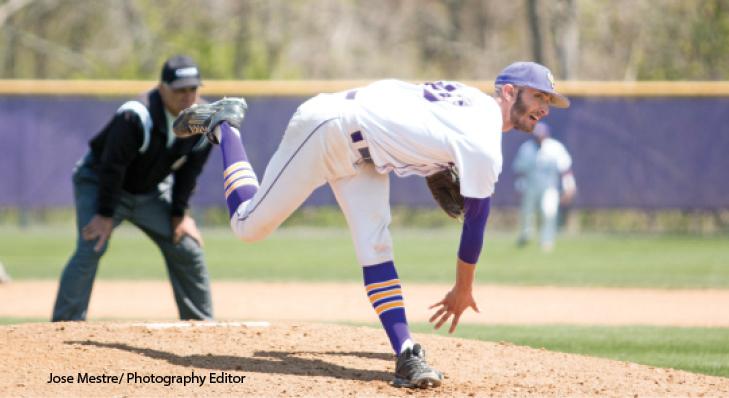 The surging Golden Rams baseball team continued their successful season this week, winning seven out of nine games, jumping to the no. 2 spot in the NCAA DII Atlantic Region polls.

Senior Dylan Tice, who was recently selected as a finalist for the Tino Martinez Award, helped lead the Rams to seven strong victories as the post season closely approaches. The Tino Martinez Award is given each year to the top player in division two baseball. Tice, who plays shortstop for the Golden Rams, is dominating at the plate, posting a .455 batting average, complimented by 15 doubles and eight home runs.

This week, West Chester battled in three double-headers, first against rival East Stroudsburg on Sunday. The Rams were able to secure both wins against the talented East Stroudsburg team by scores of 10-8 and 4-1.

The first game featured an explosive offensive performance from numerous Golden Rams ball players. Tice knocked his seventh homerun on the season in the first inning with a two run-shot scoring Drew Diehl, followed by another homerun from senior Matt Petrizzi, giving the Rams an early 2-0 lead.

The offense was just getting started after the first inning, as the Rams continued their scoring outburst early on. Late in the fifth, Petrizzi found himself in a similar situation after East Stroudsburg had tied the game 5-5. With two men on, Petrizzi loaded up and ripped another homerun, giving the Rams an 8-5 lead. From this point, West Chester never looked back, thanks to an impressive six RBI performance from Petrizzi. The Rams sealed the first game of the double-header 10-8.

The second half of the double-header featured a dominant pitching performance from who other then Petrizzi. A complete game, three hit performance from the senior utility player helped seal a 4-1 victory for West Chester. Petrizzi also produced at the plate, adding two RBI’s on three hits. Junior first baseman Justin Roman also added two RBI’s for the Rams.

In between the numerous double-headers, the Golden Rams faced off with Wilmington University, who West Chester defeated 9-5 just last week. The game finished quite similar to before, with West Chester prevailing 8-7. The game was played as a nine-inning bout, after being switched from a doubleheader.

Sophomore right-handed pitcher Joe Kinee recorded the win after entering the game in the third. Starting pitcher Eric Close struggled through three innings, but managed to keep the game in close reach.

At the plate, the Rams totaled 12 hits on the day; lead by Roman’s three. Centerfielder Drew Diehl also drove in two runs for the Rams. After a four-run inning from Wilmington in the top of the third, the Rams battled back with a four-run inning of their own in the bottom of the fourth, tying the game at five.

The offense did not stop when the Rams came back out in the fifth, posting three more runs, which Wilmington University could never recover from. Senior Captain Alec Schwartz closed the win out for West Chester, with two solid innings of one-hit pitching, as the Rams held a final score of 8-7.

After three solid victories, West Chester traveled to Shippensburg for the first doubleheader of the season series between the two teams. With West Chester sitting as one of the top teams in the region, Shippensburg came with everything they had in hopes of knocking off the surging Golden Rams.

Despite their effort in game one, Shippensburg could not pull of the first victory, as the Rams prevailed by a score of 5-4. Petrizzi exploded at the plate again, knocking in three runs on two hits for West Chester. Roman also added his third homerun on the season in the second inning.

West Chester pitcher Andrew Gernet went the distance on the mound for the Rams, allowing just six hits in seven innings with four strikeouts. The 5’11 sophomore from Lenhartsville, Pa. currently holds a 4-2 record with a 3.30 ERA in 45.1 innings.

In game two of the double header, Shippensburg was able to get the best of West Chester, handing the Rams their first loss in seven games. Pitcher Nick Stallings suffered his first loss on the season, as the Rams could not piece it together at the plate, resulting in the 7-3 loss.

It didn’t take long for the Golden Rams and Red Raiders to meet again, as Shippensburg traveled to Serpico Stadium for the second doubleheader in two days between the teams. Again, a hard fought battle resulted in a split series, West Chester winning the first and Shippensburg grabbing the second. After a tough start for Alec Schwartz, Mike Cipolla came in relief, throwing four and two-thirds innings while allowing just two hits. The pitching performance led the Rams to a 12-5 victory in game one.

Game two took a turn for the worse, as the Rams fell to the Red Raiders 6-3. Petrizzi got the start for West Chester, and despite going all seven innings, the Golden Rams offense could not bring them back.

All of West Chester’s runs came in the fifth inning, starting with a Roman RBI-single to left field, scoring Tice. Two more runs came on a balk and a Robert Knox single, but the Rams could not string together enough hits to bring them back into the game, resulting in the loss.

Despite the two splits, the Rams still jumped to no. 2 in the DII Atlantic Regional Polls. Just recently, PSAC playoff seeding’s were announced, with the Rams holding the no. 2 seed, behind Millersville. West Chester will face off with either East Stroudsburg or Shippensburg on Wednesday afternoon when play begins.

AJ Arcaini is a third-year student majoring in communication studies with a minor in journalism. He can be reached at AA788494@wcupa.edu.