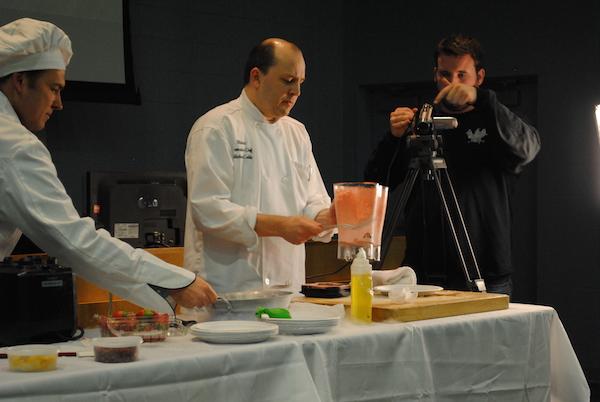 With a desire to offer a unique, engaging science course that appeals to many students, Dr. Kevin Aptowicz, Department of Physics, teaches the relatively new class, Food, Fire, and Physics here at West Chester University.

According to Dr. Aptowicz, he was inspired to create Food, Fire, and Physics after attending March Meeting, a 2011 educators’ conference.

“I was thinking about developing an exciting lecture course for a number of years,” said Dr. Aptowicz.  “At the conference, there was a talk by a faculty member at Harvard about a course they had designed, and it was a huge success.  The students loved it, and that planted the seed for me in my head that this could be something that our students might really enjoy.”  [pullquote align=”right”]Food, Fire, and Physics was a popular class because ‘there’s a real emotional connection to food in a way that’s very different than other topics [he] would cover in a course.[/pullquote]

Dr. Aptowicz was on sabbatical at the time he began to think about creating Food, Fire, and Physics. “Without going on sabbatical, I wouldn’t have found the time to really critically think about what the course was going to look like and how I would run it,” said Dr. Aptowicz.  “With sabbatical, I was able to invest a tremendous amount of energy into designing the course, and that proved critical as well.”

According to Dr. Aptowicz, “the goal of the class is to engage students in thinking about cooking and food from a scientific perspective.”

“My background in soft matter physics lends itself to thinking about the properties of food,” said Dr. Aptowicz.  “The other thing I realized was how much people love to think about food, to look at food.”

Dr. Aptowicz explained that Food, Fire, and Physics was a popular class because “there’s a real emotional connection to food in a way that’s very different than other topics [he] would cover in a course.”

“It’s a really meaningful part of their lives, whether it’s birthday parties, weddings, first dates, and because of the way students connect with food, it’s a wonderful way to talk about science,” said Dr. Aptowicz.

After taking Food, Fire, and Physics last spring when it was offered for the first time, sophomore musical theatre student Justina Claggett is now one of three student aides for the course.

“It’s much different this year because he has us three working with him,” said Claggett.  “It was really experimental, so we are just taking what he had last year and we’re enhancing it.”

According to Claggett, she decided to help out with the class because she thought “it’d be really fun to see how it transformed this year.”

Claggett and the other student aides mainly focus on the demonstrations they do in class.  Such demonstrations have included baking chocolate chip cookies, making whipped cream, lighting a Cheeto on fire, and measuring the pH level of different substances by mixing them with red cabbage water.

“It’s not as planned out as you think,” said Claggett.  “What you see is what we’re seeing for the first time, too.”

Freshman sociology student Tyler Rutherford is one out of nearly 200 enrolled in the class.  According to Rutherford, he signed up for the course “simply because of the name Food, Fire, and Physics.”

“You can’t really get much better than that when it comes to a class,” said Rutherford.  “I think it’ll be interesting and beneficial just to know the simple physics of food and how things work.”

“I heard from older students that it was a good class if you weren’t that great at math but needed the science requirement,” said Kelly.

According to Kelly, she appreciates having Dr. Aptowicz as a professor.

“I like that [Dr. Aptowicz] takes the time to explain everything and makes sure that everyone understands what’s going on,” said Kelly.  “He really breaks it down in a simplistic way that it makes it easier to understand.”

Rutherford agrees and likes “how personable [Dr. Aptowicz] is.”

“One of the things I love about this class is the excitement of the students,” said Dr. Aptowicz.  “What fuels me as a professor is the fact that the students are so willing to go along on the ride with me.”

If Food, Fire, and Physics is offered in the future, it will most likely be in the spring and there will only be one section.

“I would strongly recommend students who do love food and do love cooking, even if they have a weak science background or weak math background, to give the course a try,” said Dr. Aptowicz.

Casey Tobias is a first-year student majoring in women’s and gender studies. She can be reached at CT822683@wcupa.edu.