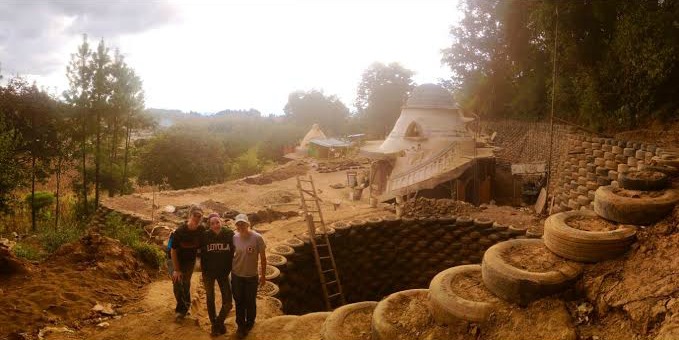 There are many aspects to love about West Chester University, but among the top reasons has to be the fact that we have one of the longest winter breaks among universities in this area, which means more time to do the things we want while we still have the freedom to!

Being that I am senior and that this was my last winter break of my academic career, I knew that this was one of my last chances of freedom to go and do something worthwhile. Except, like many with similiar ambitions, I didn’t know what that something was until I spoke with my old roommate, who said she was returning to Guatemala to do volunteer work. She had gone once before to help a nonprofit organization called Long Way Home, which is committed to building sustainable schools.

At this point she was leaving two days later, and at the last second, I asked if I could go with her. I booked an impromptu flight, and was on my way out of the country 48 hours later. I had not a clue what I was getting myself into, other than it would be a great way to throw myself into a culture I was not accustomed to and that it was a way to make a positive difference.

When we arrived in Guatemala City, we were quickly shuffled into our driver’s car since it is not a safe area, especially for those who stick out like sore thumbs (which we, as three blondes, did).  We were then driven to a small indigenous town called Comalapa that was about two hours away. We were driven up dark, windy dirt roads for a long time before finally stopping at a large metal gate, where we were greeted so kindly by the staff of Long Way Home.

The volunteer house was throwing a bit of a going away party because a couple of the volunteers were leaving in a few hours in the middle of the night. All around ,there were people swinging from hammocks, sharing food, playing instruments and singing familiar tunes while drinking Brahva (a popular Central American beer).

It was a little intimidating to walk into at first, but everyone was so welcoming. It died down shortly because everyone there goes to sleep around 9 p.m. every night. Wake-up call comes very early.

The work day begins at 7 a.m., so each day, everyone at the volunteer house would get up around 6 a.m. and be ready to leave for work at 6:45 a.m. We would then collectively begin our 15-minute hike up the mountain, trekking through corn fields. The work day was from 7 a.m. to 4 p.m., with one hour for lunch.

Our eight-hour work day was much like you would find on any other site, it was just more eco-friendly. Some of the tasks included shoveling and sifting gravel, packing tires, organizing wood, sanding, staining, building, etc.

The school itself is called Los Técnicos and it was founded by Matt Paneitz. Matt was originally stationed in Comalapa during his time in the Peace Corps, and ended up returning to the United States only long enough to raise funds before going back to Guatemala to start this sustainable school that would aid in the areas of employment, education, and the environment.

The construction site sits on the top of a mountain that overlooks the small town of Comalapa, from which you can see the two distant volcanoes of Lake Atitlan. It is in every way aesthetically pleasing, but it is even more beautiful because of the team that occupies the space.

Long Way Home employs numerous Guatemalan construction workers, and has a great staff of likeminded people who were either once in the Peace Corps or volunteered there and decided to stay.

The construction site itself is unlike almost any other construction site that could come to mind. First off, the kind of construction that is done there is called “green building,” which deals with sustainable structures that are environmentally responsible and resource-efficient. For instance, they often build with used tires that they pack with dirt and trash to create walls and stairs. Trash is used in almost everything that they build. The team started trying to show the town better ways to dispose of their trash by teaching them to put it in plastic bottles that the organization would then build with to use as structures and designs.

The alternative to this for a lot of people in Comalapa was just to burn their trash in their kitchens, which was causing a lot of respiratory problems.

Another aspect that exists on the construction site that is different is all of the many languages that you can hear ping-ponging around the site. Most everyone there speaks Spanish solely, or as a second language, but you also encounter other languages like French, for example. Since there are so many volunteers coming and going from all over the world, you are exposed to so many languages and dialects while there. I met people from Australia, England, and Canada to name a few places.

There really was no greater feeling than to be a part of something that was so much bigger than myself, and the ideas that I was previously aware of. I was so inspired by all of the other volunteers and staff that I met; I knew that this was going to be one of those experiences that would forever change the way I saw the world.

A week came and went too fast, and on our last day we only wished that we could have had stayed longer, living and working with these beautiful souls. I would highly recommend to anyone who has interest in Central American culture, green building, education, or volunteer work to consider Long Way Home. You can find more information about this organization by visiting www.lwhome.org

Kirsty Palo is a fourth-year student majoring in English with a minor in journalism.  She can be  reached at KP762793@wcupa.edu.