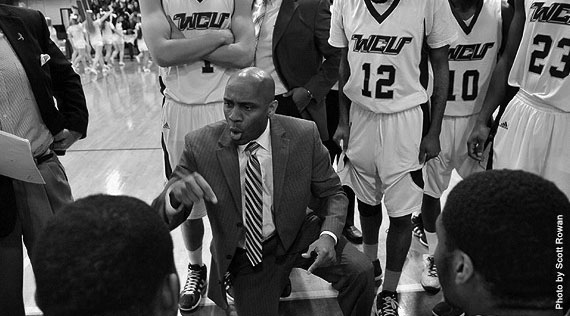 After splitting the games in Fairmont, West Virginia last week, the West Chester University men’s basketball team opened up PSAC play at home this week with a pair of games against Millersville University and Kutztown University.

Senior forward Cory Blake was honored before the game with a commemorative game ball recognizing his 1,000th career point scored in last season’s final game against Indiana University of Pennsylvania in the first round of the NCAA Tournament.

The Golden Rams hosted the 1-1 Millersville Marauders on Wednesday night for their first home game of the season. Fueled by a quick four points from senior Eric Frans and a pair of three-pointers from newcomers Avery Brown and Mike Wilson, West Chester got out to a quick 10-0 lead on Millersville. Forcing 14 turnovers in the first half, WCU was able to convert 14 points off of those turnovers. The swarming defense of the Golden Rams made it hard for the Marauders to develop a rhythm on offense, and the closest they got to tying the game up was seven points with seven minutes left in the first half. Led by Blake and junior Matt Wiseley with five a piece, West Chester converted 10 second chance points in the first half while out-rebounding Millersville 20-11. It was a gritty battle in the paint for both sides in the first, with both sides scoring 14 points in the paint. Blake’s 12 points led the way for the Golden Rams, while Kelvin Parker led the Marauders with 10 points as both sides went to the locker rooms with West Chester leading 34-22 at the half.

West Chester came out with a defensive spark in the second half, increasing their lead to 16 five minutes into the half. Forcing bad shots and wild passes thanks to Coach Blair’s patented high pressure defense made it a hard task again for the Marauders to develop a rhythm.  Led by an 18-4 run over a span of five minutes, the Golden Rams got out to a commanding 29 point lead with five minutes remaining in the game. They closed out the game on a 28-14 run to beat Millersville by a convincing 29 points in a 78-49 victory. West Chester dominated in the paint in the second half, outscoring Millersville 34-10. The big man Frans led the way in the second half with eight points and seven rebounds, absolutely dominating the Marauder big men in the paint with his aggression. The defense for the Golden Rams held the Millersville offense to just 26.7 percent shooting in the second half, and percentage of 32.7 from the floor in the game. Three players scored in double figures for West Chester, led by Blake’s 15 points and seven rebounds, alongside 14 points and eight rebounds from Frans, and 13 points and six boards from Brown.

West Chester closed out the week with another home contest on Saturday afternoon against 1-2 Kutztown University. The Golden Rams continued where they left off in the second half against Millersville and got out to a commanding 19-3 lead thanks to the big trio of Blake, Frans, and Wiseley. The Golden Bears chipped away at the West Chester lead from there on out before taking their first lead of the game with 5:49 left in the first half. Kutztown lead by as much as six with three minutes to go in the half before Tyrell Long converted a layup as time expired to give WCU the two point lead going into half. Wilson led the way for the Rams in the first half with eight points and three rebounds while Howard Sellars led the way for Kutztown with nine points and six boards. The pesky defense of the Golden Rams forced 12 turnovers in the first half and converted them into 15 points. Both sides had production from their benches in the first, with Kutztown leading 21-16 in bench points.

The second half featured back and forth intense action for the full 20 minutes. The second half featured a large number of fouls early on both sides, with the defensive aggressiveness picking up for both teams. Kutztown used turnovers as their way of keeping the game close, forcing 14 turnovers on the Golden Rams. The offense for West Chester struggled to get into any kind of rhythm in the second half as they saw the lead slowly dwindle away. The game was within a five point spread for the final five minutes of the game as West Chester called a timeout with 1:09 remaining and just a two point lead. After gathering the rebound on a missed Kutztown three-pointer, Parrish Grant passed to Ben Mingledough who was fouled with 24 seconds remaining and would head to the line to shoot two. Mingledough converted one of two to give the Golden Rams a three point cushion. Ethan Ridgeway rushed down the court and made a layup to make it a one point game with 19 seconds remaining.  After Blake converted one of two free throws, Tyler Brooks of Kutztown had a chance to tie it at the line with eight seconds remaining, but missed the second as Wiseley grabbed the rebound and was fouled with the Golden Rams up by one.

This wasn’t the first time Wiseley has been at the free throw line with a chance to give his team a late lead. Wisley drained a pair of free throws with 5.1 seconds remaining in last year’s PSAC semi-final matchup against Gannon University to give them the 77-76 victory and send them into the championship against East Stroudsburg University. With the exact same time remaining on the clock as last year, Wiseley needed to yet again have ice in his veins. Wiseley stepped up to the line and floated the pair of free throws in to give the Golden Rams the three point lead with five seconds remaining. “ The Golden Bears stormed down the court as the ball came to Martin Dietrich in the corner for the last shot, Dietrich shot a turned around jumper that just rimmed out as time expired the give West Chester the 63-60 victory. Wiseley and Blake led the way for the Golden Rams with 10 points and five rebounds each, and Mingledough joined them in the double-figure club with 10 points of his own.

“We felt everyone was getting involved. We definitely could have played better, less turnovers, but I think we are heading in the right direction as of now.” said Wiseley when asked about Saturday’s win and what to expect this season.

After a pair of home wins this week against Millersville and Kutztown, the Golden Rams continue the homestand with another pair of games this week. West Chester will host Lincoln University on Tuesday night and Philadelphia University on Saturday afternoon. West Chester will need to keep up the high pressure team defense, and will look to the big man trio of Blake, Frans, and Wiseley to lead the way on both sides of the ball this week.

Last year, the matchups against Lincoln and Philadelphia U were two excellent games. At Lincoln, West Chester lost control late in the game and ended up suffering a 69-60 loss on the road. This was only West Chester’s second game of the season last year. Against Philly U, West Chester pulled out an impressive 90-82 in overtime. Philadelphia U is one of the strongest teams that the Golden Rams play every year, and that certainly is still true this year. A highly recruited, highly athletic team is exactly what the Golden Rams expect to see when they take on Philadelphia. Expect West Chester to continue their normal game plan of hustle, scrappy defense, and playing at their chosen tempo.