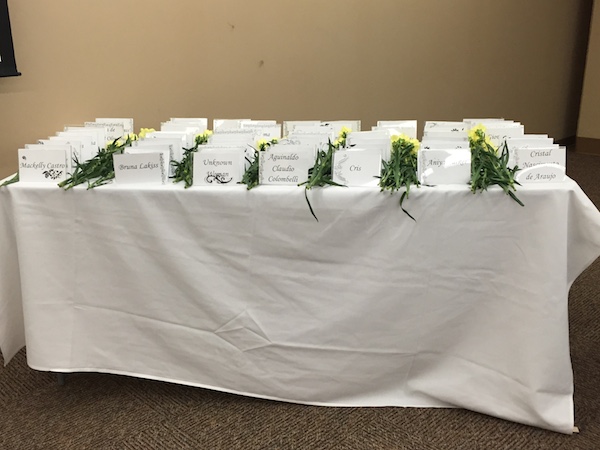 In order to commemorate the lost lives of trans people and raise awareness of hate crimes, the LGBTQA hosted a memorial service for the sixteenth annual Transgender Day of Remembrance on Thursday, November 20 in Room 115 at Sykes from 8 to 9 p.m.

Aside from members of the LGBTQA and West Chester University students, the Brandywine Roller Girls were also at the memorial service to show their support.

Malik Muhammad, the Graduate Assistant for the Office of LGBTQA Services, gave an introductory speech on the Transgender Day of Remembrance.

“It is plain to see something is wrong, and something must be done,” said Muhammad.  “The stories of fallen transgender people rarely make headlines because we live in a world which denies their existence.”

After this, a select few of the Brandywine Roller Girls read the names of transgender individuals who lost their lives due to hate-based violence.

At each table, there were numerous nameplates representing these individuals and a vase of flowers.  Soft, yet powerful music filled the room as each name was called out.  When we heard the name in front of us being read, we picked out a single yellow carnation from the vase and placed it on a separate table, along with their nameplate.  The atmosphere was heavy as everyone in the room exchanged somber, sometimes teary glances.  Our hearts and minds were with the individuals we were honoring.  Though we never knew them, we all felt deeply affected by their suffering.

In that moment, we were united.  We were a community.

Once the table was full and the last name was read, one of the Brandywine Roller Girls, Chair of Community Events Rita Kelly, took to the podium as the keynote speaker of the night.  Kelly shared her story of coming to terms with being trans.

“This is an occasion that’s necessary, but is also burdened with sorrow and fear.  It’s a reminder that there’s such ridiculous hate out there directed at us simply for being what we are,” Kelly began.  “Every time I hear one of us is lost, I feel utterly hopeless. When I was asked to speak, I knew I would have to confront that doubt.  I felt a responsibility to bring a message of hope and to lift our heavy hearts with courage.”

I was enraptured the moment Kelly started speaking. As someone who had only met a couple of trans people before, it was eye-opening to hear a firsthand experience from a trans person, especially someone who had grown up during a time where the term transgender was not commonly known.

“It’s one thing to see trans people on TV and magazines, but it’s quite another to really know someone,” said Kelly.  “That familiarity is how you overcome people’s fear.  That’s how allies and advocates are born.  That’s how you counter hatred and violence.”

Kelly ended with a strong message of hope that clearly resonated with the rest of the room.

“Visibility means you’re a light shining in the darkness,” said Kelly.  “I see lots of lights twinkling out there.  Every one of you shining out there in the dark is a hero.  When I see this sea of lights and I think about the countless lives illuminated by each and every one, how can I deny that it’s getting better?  We have a long, long way to go, but it’s brighter now than it ever has been.”

When Kelly finished, the Brandywine Roller Girls read a poem, which borrowed some lines from Laurence Binyon’s First World War poem “For the Fallen.”

“We have joined together to remember, to seek, to comfort, and to learn, to learn from this experience that we have to work even harder to become better than we have been before, to find greater resources and inner strength to repair our own corner of the world, our campus,” said Perrego.  “So that these lives we honor were not lost in vain, we need to make it our obligation to be more compassionate and aware of the humanity of others.”

The memorial service came to a conclusion after the attendees gathered outside Sykes for a brief candlelight vigil.  Muhammad ended the night with a second poem, and I thought back on his speech from earlier in the night.

“Let us not become complacent.  Let us remember those who we lost today, tomorrow, and each day that follows,” said Muhammad.  “We cannot continue to leave the transgender community behind.  Let us listen to the voices which are so often ignored and speak when their voices cannot be heard.”

If you’re a trans person in need of help, you can contact the non-profit Trans Lifeline at 877-565-8860.  The hotline is staffed entirely by trans people who “welcome the call of any transgender person in need.”  If you want to donate, volunteer, or view their operating hours, you can visit their website at translifeline.org.