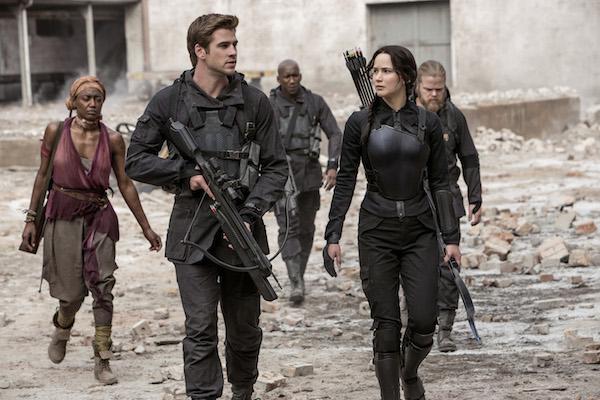 The first installment in the last chapter of the popular franchise, “The Hunger Games: Mockingjay Part 1,” is all coil and no release. It’s a taut, dark portrait of a universe upended by revolution, one where the flashy bread-and-circuses of the first two films have been replaced by anger and despair.

If it’s more talky and less satisfying than its predecessor, the propulsive “The Hunger Games: Catching Fire,” it’s largely because the conclusion won’t come until next year with “Part 2.” It’s still a sporadically involving adventure, regardless.

As the movie opens, the nation of Panem, the future country where the story takes place, is in an uproar. In the wake of the act of defiance at the end of “Catching Fire” from Hunger Games champ Katniss Everdeen (Jennifer Lawrence) and her well-placed arrow, everything is falling apart. The districts, where the working-class and the poor are consigned, are in revolt. District 12, from which Everdeen hails, has been destroyed. Even the Capitol, the elite beating heart of an evil empire that forces its young people to compete in its deadly Hunger Games, is in trouble.

Katniss has been taken in by rebels in District 13, including President Alma Coin (Julianne Moore) and gamesmaker Plutarch Heavensbee (the late Philip Seymour Hoffman), from the last film, who turned out to be a radical in disguise.

Their mission is to rain down blows against the empire, though Katniss has her own personal mission of trying to save her fellow tribute and Games partner Peeta Melark (Josh Hutcherson), someone she grew to love. He remains in the Capitol and is being used by the government in a media propaganda war against the those involved in the rebellion, including Katniss. She thinks he’s being forced into being a mouthpiece, others, such as her old friend Gale Hawthorne (Liam Hemsworth), think he has just sold out.

It’s this tug of war between the Capitol, run by the always-plotting President Coriolanus Snow (Donald Sutherland), and the upstarts in District 13 that gives “Mockingjay” its tension. Unlike the previous two films, where the running of the games provided much of the momentum, there isn’t much action in “The Hunger Games: Mockingjay Part 1.” Still, the plot machinations promise things will get back to good old mano a mano in the next film.

Working from a script by Peter Craig and Danny Strong, director Francis Lawrence, who directed “Catching Fire” but not the first movie, manages to keep things moving. And there are moments that rise above being a mere setup: a rebel incursion into a darkened Capitol in which our heroes descend like fireflies against a black sky is intriguingly suspenseful, while the issues of political control and media manipulation at one point rebels are executed after having hoods placed over their heads bear obvious correlations to our own world.

Lawrence delivers her best Games performance here as Katniss struggles to make the transition from player to power broker, from a woman who can’t bear to leave her boyfriend behind to fronting an uprising. And make no mistake, this is Lawrence’s movie, even more than the other films.

Providing what few hints of comic relief there are is Elizabeth Banks as the formerly flamboyant Effie Trinket, the woman who was the overly stylish chaperone for the District 12 players. Now living in the more austere and spartan surroundings of District 13 where Katniss’ boozy mentor Haymitch Abernathy (Woody Harrelson) bemoans the lack of alcohol, Effie can only dream of her previous sartorial glories.

But her fashion options fit “Mockingjay’s” mood grey and grim. For the conclusion, she, and the audience, could do with a pop of color.

Cary Darling is a writer for the Fort Worth Star Telegram and her article is distributed by TNS.