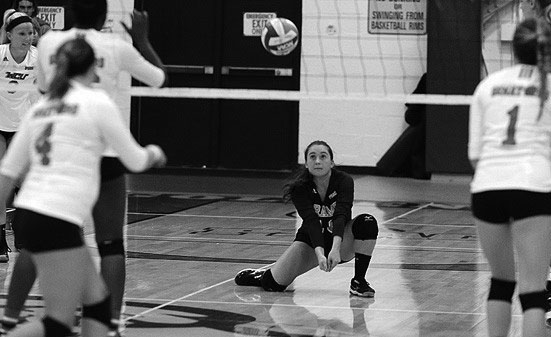 It was a tough weekend for the Lady Rams volleyball squad, as they suffered two big losses to Lock Haven University and University of Pitt-Johnstown. As the team prepares for the home stretch of their season, they will need to rebound from the tough weekend.

First up this week, before LHU and UPJ, came the Cheyney Wolves, Cheyney is one of the weaker teams in the PSAC, so this game came as an easy win if the Rams played their best. Fortunately, they did, and the Rams took an easy victory over the Wolves in three sets.

A wide spread of players saw in-game action against Cheyney, but senior Julia O’Brien continued her ways, leading the Rams to the victory. O’Brien finished with a team-high 18 kills. Annalee Halbert led WCU in assists with 19 while Macon Frey added 14 digs.

The easy win at Cheyney was nothing compared to what was in store for the weekend. Lock Haven entered the game ranked no. 1 in the PSAC. In their last meeting, LHU defeated West Chester 1-3 at Hollinger Field House. The Golden Rams entered Friday nights game in hopes of stealing a huge PSAC win.

Lock Haven took the first set, but WCU followed back taking sets two and three. After a nail biting fourth that was eventually taken by Lock Haven, LHU came back and dominated the fifth, defeating West Chester 2-3. West Chester played well throughout, but in the end, LHU proved to be too much for the Rams.

Leading the way for WCU was none other than Julia O’Brien with 17 kills. Karleigh Lutz and Cara Reese also contributed with 13 kills apiece.

The matchup against LHU somewhat sums up the Golden Rams season as a whole. With a lot of losses coming in extremely close games, it seems there is one piece missing to the Rams ultimate success.

The Rams did not have to wait long at a shot of redeeming their Friday night loss, but unfortunately they found themselves on the losing end again, this time against UPJ.

UPJ and WCU matched up this season inside Hollinger Field House, where the Golden Rams won by a score of 3-1. Despite being a close game, the Rams dominated in the first meeting between the two teams. This time, the tables were turned.

After a strong start, the Rams could not complete the job, eventually falling to University of Pitt-Johnstown 1-3. UPJ had three separate players all record double-doubles.

Leading the way for the Rams in the loss was O’Brien and Reese with 10 kills each. Complimenting the two was Halbert who posted 32 assists and eight digs, while Callie Krajcir added 25 digs.

Despite the two losses, WCU did finish their eight game road trip at 5-3, which is not bad. They now will return home for two matchups with PSAC opponents Kutztown and East Stroudsburg. In their previous meetings, WCU defeated both opponents, Kutztown 3-2 and ESU 3-0. Hopefully, the Rams can grab two huge PSAC wins as playoffs are approaching, helping their stock.