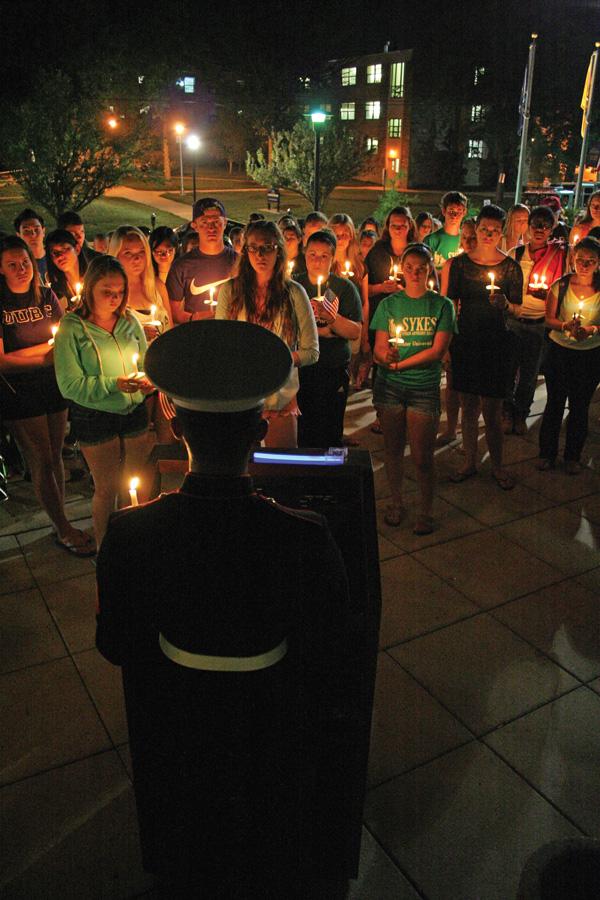 On Sept. 11, 2014, the Student’s Veteran Group, along with the Sykes Advisory Board, held the 13th annual candlelight vigil for the 2001 September 11 attacks on the Twin Towers, Pentagon, and hijacking of United Airlines flight 93. Approximately 3,000 people died in these attacks.

Before the event began, staff workers handed out unlit candles and miniature American flags to the attendees.  At the start of the ceremony, the number of attendees reached out onto the sidewalk in front of the student union.

Shortly after the lowering of the flag, the president of the Student’s Veteran Group, Yahia AlDharhraa, spoke about his life as a marine, the bravery and courage of first responders, and the community as a whole coming together in times of crisis.  He touched not only upon the events of 9/11, but also on events such as Hurricane Sandy,  events that caused communities to come together and help one another.

At 9:11 p.m., a staff worker lit the first candle, and the light slowly spread from there to all the others attending the event.  Several others students, service members, and staff workers stepped forward to share stories of first responders they had known.  Every one of the speakers stressed the same thing: never forget the events on 9/11, and remember the community.

Also present at the event were other first responders, some whom also had stories to share about being in the line of duty.  The stories largely answered the question: “Where were you when the towers were hit?”

Among the groups present, the West Chester band opened and closed the ceremony, finishing with the popular song “Proud to be an American.”  After the official closing of the ceremony, many attendees lingered, sharing stories with each other and thanking service members for their service.