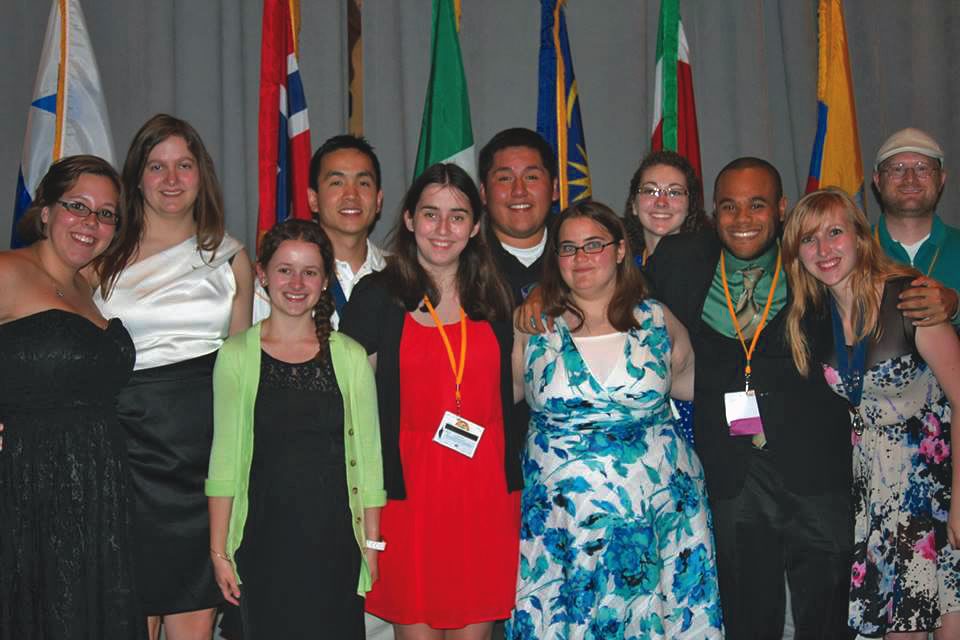 In June, I was able to travel to Nashville, Tenn. with three other members of WCU’s Circle K International Club for Circle K’s international convention.  The convention was rebranded this year as CKIx, the ultimate six-day Circle K experience.  Circle K members from around the world gathered in Nashville.

Our journey first started in Lancaster, Pa on June 17.  West Chester University is a member of the Pennsylvania District of Circle K (the PACK), and so we were traveling with the rest of the members of the PACK that were also attending CKIx.  At 3 a.m., around half of the group met in Lancaster, Pa.  We then traveled to Pittsburgh, where we picked up the rest of the PACK.

After several pit stops, we reached Nashville, Tenn. around 6 p.m. that night, just in time for the opening session of CKIx.  Each district had their own “role call” cheer to introduce themselves to the rest of the convention.

People had traveled from all parts of the country, and there were several members from Jamaica and Aruba. Part of the opening session also included a flag ceremony, in which the various countries that have chartered Circle K organizations were introduced and their flags were brought to the stage.  Circle K takes great pride in being a truly international organization.  It is, in fact, the largest international student-led collegiate service organization. It was incredible to visually see just how far-spread the club truly is.

After showing our roll call pride, we were divided into our new Large Scale Service Projects  groups where we introduced ourselves and came up with team names.  We were also given our community service assignments.

My team was assigned to clean up the local streets and a local park.  The next day, we met for breakfast and then traveled down the streets of Nashville.  Armed with trash bags, we cleaned up the streets.  When we arrived at Centennial Park, we continued to clean.

We were all amazed by the replica of the Greek Parthenon in the park, and for a little team bonding, we played a game of “ships and sailors” there.  A big tenant of Circle K is service, so it was nice to spend the day beautifying the city that was hosting CKIx.

The second day was my personal favorite project, as we went to Nashville Childcare Center, where we played with kids ages 2-5 on the playground, read them stories in their classroom, and spent time with them.  It was a blast to see how excited the little kids were to have guests in their classroom.

After a morning of spending time with the children, we then went to their resource house next door.  It had recently flooded due to a burst pipe.  While the construction was done, they needed help cleaning and going through supplies.  It was an amazing project, because between all of us, I felt that we made a real difference at the childcare center.

Service is a hugely important part of Circle K.  While my group was helping at the park and the childcare center, Jonathan Auquilla’s group was cleaning a local park and helping at the Salvation Army’s park.  He too had the opportunity to play with the children and to make a difference in their day.

Auquilla said, “LSSP was quite the experience. Volunteering with people from around the world made me realize how important it is to give back to the community. There are so many of us willing to help out.”

Christine Lentz’s group went to the Second Harvest Food Bank and sorted through around 16, 510 pounds of food.  That amount of food would be about 13,000 meals.  Though her work involved standing in a freezing refrigerator for some time, Lentz said the experience “showed how passionate the members of Circle K are and how many people a few hours of service can benefit.”

Amanda Sloan’s service group spent one afternoon cleaning up a local river.  They actually had to get knee deep in the water, but were able to make a big difference with their trash clean-up.  Their other project was Tools for Schools.  Her group built lab tables for students at local schools in Nashville.

These were just a few of the incredible projects Circle K members took part in.  Some went to Soles for Souls (an organization which recycles old shoes), March of Dimes (benefitting premature babies), Ronald McDonald House, and more.  Between the hundreds of Circle Kers, we made a huge impact in the Nashville community during LSSP.  There were approximately 3837.5 service hours done by 282 attendees.

CKIx was not just about service though.  When  the International Convention started, it became all about politics and workshops.  We spent time hearing from the different candidates for international board during caucusing, as they explained to us why they believed they should be elected.

We also were able to vote on different amendments that were being proposed to the international bylaws during the House of Delegates.  That session got particularly heated, as the room was set up with a “pro” and a “con” microphone.  When an amendment was proposed, many Circle K members went to either microphone, stating their piece.

In an organization that is so large and international, it was amazing to see how everyone’s voice truly did make a difference.  Between voting and the various leadership workshops we participated in, the second half of CKIx was a huge success.

WCU Circle K also had a special experience at the awards ceremony.  We were awarded the 2nd Place Single Service Award in the Silver Division.  This award was for our annual charity volleyball tournament which takes place in Hollinger each spring.  It benefits the Eliminate Project which strives to end maternal and neonatal tetanus.  We also won the 2nd Place Club Achievement Award in the Silver Division, which is an award recognizing our club as a whole.

In between all of the community service and politics, there was also time for lots of fun at CKIx.  One night, there was a line dance instructor who taught us several dancers.  On another, many groups went to experience authentic southern barbeque at local restaurants.  Even with the schedule jam-packed, there was still time for a quick trip to the Grand Ole Opry for some of our group.

Any student interested in getting involved in WCU’s Circle K is invited to come to our weekly meetings on Tuesdays at 7:30 p.m. in Brandywine Hall Room 031.They can also contact me at TK780615@wcupa.edu for more details.

Theresa Kelly is a third-year student majoring in English literature secondary education.  She can be reached at TK780615@wcupa.edu.