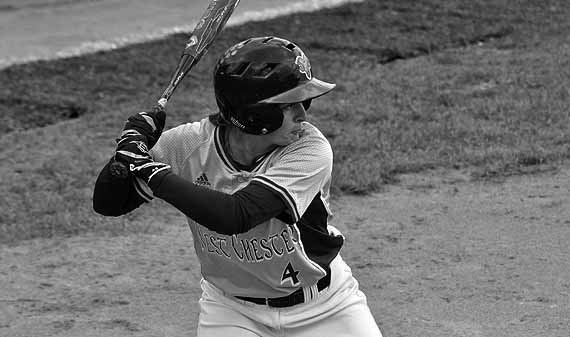 Coming into the doubleheader, Shepherd University held a record of 2-5 and West Chester was 5-3 including a sweep against Chowan University last weekend. Sara O’Dell was the starting pitcher for the Golden Rams, versus Kirsten Barstad for Shepherd.

West Chester bounced back in the second half of the double header with a dominating 13-5 win. Micaela McSpadden got the start for the Golden Rams versus Lyons for Shepherd. West Chester started the game off with an explosive seven run first inning thanks to an RBI single by Murl, a two RBI single by Quense, two runs scored off an error by Shepherd second basemen Elisa Orlandi, and a two RBI double by Norris. Shepherd went scoreless in the first inning. The Golden Rams continued to dominate in the second inning with four runs after an RBI double by Ali Vavala and a three RBI double by Norris. Shepherd continued to struggle with a scoreless second and third inning.

In the fourth inning, West Chester scored two runs off an RBI double by Kelly Anderson and an RBI ground out by Sarah Walasavage. West Chester  went scoreless to start the fifth inning. In the bottom of the fifth, Shepherd’s offense came alive with five runs after an RBI single by Tayler Schaefer and a grand slam by Savannah Snyder, but it was not enough to overcome a dominating effort in a shortened five inning game.

After splitting the double header versus Shepherd University, the Golden Rams now have a record of 6-4 on the year. West Chester looks to build off of this win behind the offense of Quense, coming off of a performance where she was a combined 4-for-7 with a pair of home runs and six RBIs for the upcoming doubleheader at Chestnut Hill on Tuesday. Chestnut Hill is struggling to begin the season with a record of 0-6 due to poor offensive performances in each of their first six games.