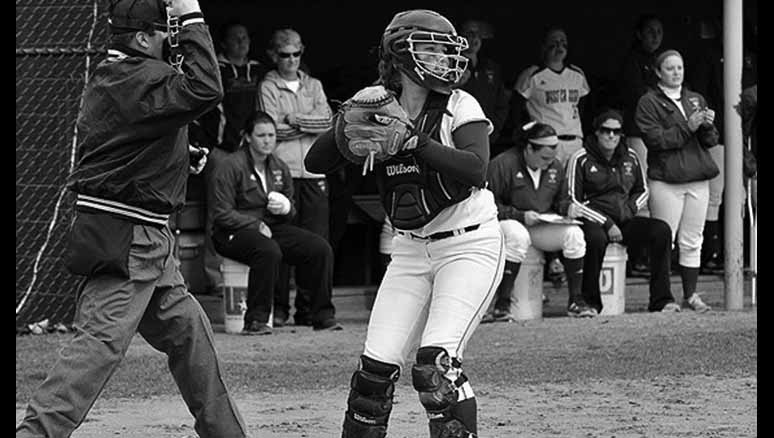 hough the weather is making it hard for the team to compete, West Chester’s women’s softball team is still firmly holding a 3-3 record on the season.

From Feb. 22 to the 23, the Golden Rams went to Raleigh, N.C. to compete in the Shaw Tournament. These were West Chester’s first games of the season, and head coach Diane Lokey had her team prepared and ready to go.

The first team West Chester competed against in the tournament was Mount Olive College, a local college in N.C. While West Chester gave the home team all they could handle, it was not enough, as the Trojans went on to win 8-3 in the season opener.

Mistakes cost West Chester dearly in this game, as three errors were committed by the Golden Rams while fielding. These errors led to six unearned runs, and though West Chester began a comeback towards the end of the game, it was not enough to overcome the Trojans.

Kim Murl, the right-handed senior pitcher from Hamilton, N.J., experienced her first loss on the young season against Mount Olive. Murl pitched for 1.2 innings, and gave up an unfortunate six unearned runs on only three hits. She also walked one batter and struck out another.

The three runs that West Chester did score against the Trojans were from Murl, Megan Kelly, and Shannon Gray.

Jessica Schuck, the senior from Richboro, P.A., was the only player on the team to score an RBI. However, it was still too little, too late for the Golden Rams in this game.

Determined not to go 0-2 in the tournament, West Chester next played West Virginia State University. Displaying a dominance that was not shown in their previous game, the Golden Rams crushed the Yellowjackets with a final score of 13-1.

In an impressive performance, freshman Micaela McSpadden won her first game as a Golden Ram, allowing just one run for the Yellowjackets in her debut. McSpadden walked two other batters and struck out another. If she can capitalize on this victory, West Chester will have a dominant pitcher on their team for the next few years.

Kelly scored three runs against West Virginia State. Kelly also tallied one hit and three RBIs as well in a superb showing against the Yellowjackets.

Jessica Norris and Laura Altenburger both scored twice for West Chester in this matchup. Ali Vavala, Kim Begley, Janessa Rios, Murl, Sarah Derstine, and Jillian Murray all scored once to help West Chester get to their grand total of 13 runs.

Kelly Anderson and Altenburger led the team in hits for this game, both notching two.

Next up in the Shaw tournament for West Chester was Fairmont State University. Sitting on a record of 1-1 before the game, the Golden Rams overcame the Falcons to win with a final score of 6-2, proceeding to a 2-1 record.

Katie Erb pitched her first game of the season, and lasted all seven innings. A sophomore from Douglassville, P.A., Erb let in eight hits, with only two runs scored off those. Erb did not walk a batter the entire game.

Vavala led the team in hits for this game, getting to base twice. Other players with a hit during this game included Kelly, Murl, Murray, and Erin Quense.

Quense, in particular, sealed the deal for West Chester with her one hit. With three players on base already, Quense hit a double that allowed all three to score for West Chester. Quense’s hit was even more impressive considering there were already two outs as well. The Falcons could never recover from the deficit brought on from Quense’s three-run hit.

In yet another spectacular performance, Quense blasted a three-run homerun to put Shepherd away once and for all. It was Quense’s only hit of the entire game, but she made it count.

Schuck and Norris led the team in hits for this game with two, with both players converting one of those hits into a double as well. Other players with a hit against Shepherd included Kelly, Anderson, Alternburger, and Murray.

Making her second collegiate start, McSpadden pulled off her second win for West Chester. McSpadden pitched for 5.2 innings, allowing nine hits and three runs to Shepherd. Eventually, McSpadden was taken out, with Erb coming in to make the save.

On Mar. 1, the Lady Rams played a double-header against the University of Virginia at Wise in the first-ever meeting against the two teams, but fell to their opponents with final scores of 5-0 and 6-2.

Erb pitched the first game, allowing eight hits and five runs in four innings pitched. Even worse, the team managed only two hits the entire game, with those coming from Vavala and Quense.

In their second loss to UVA, Sara O’Dell pitched for West Chester, allowing seven hits and three runs in just over two innings pitched. The team only mustered four hits in this game as well. Two of the hits came from Murl, while the others came from Schuck and Kelly.

On Mar. 8, the Golden Rams were supposed to take on Shepherd University at home, but that game has been moved to their opponent’s field due to poor field conditions.

With the Rams sporting a .500 record at the moment, there is much room for improvement from this team. Costly errors have hurt this team in all three of their losses, and there have been one too many hits allowed.

However, so far in the young season, there have been many bright spots, including the play of McSpadden and Quense.

Another bright spot on the Lady Rams’ season has been Kelly. The senior from  Hatboro, Pa., currently leads the team in batting average with .333 overall. Kelly is also leading the team in hits thus far, getting to base now a total of six times, including one double and one triple on the season. Kelly also has five RBIs.

If all three of these young stars keep it up, the teams’ record should improve in no time.

Upcoming games for the Lady Rams include a visit to Chestnut Hill College, as well as the Dot Richardson Spring Games in Florida from Mar. 14 to 19. With many games to go and the season still young, the future looks bright for the Lady Rams.