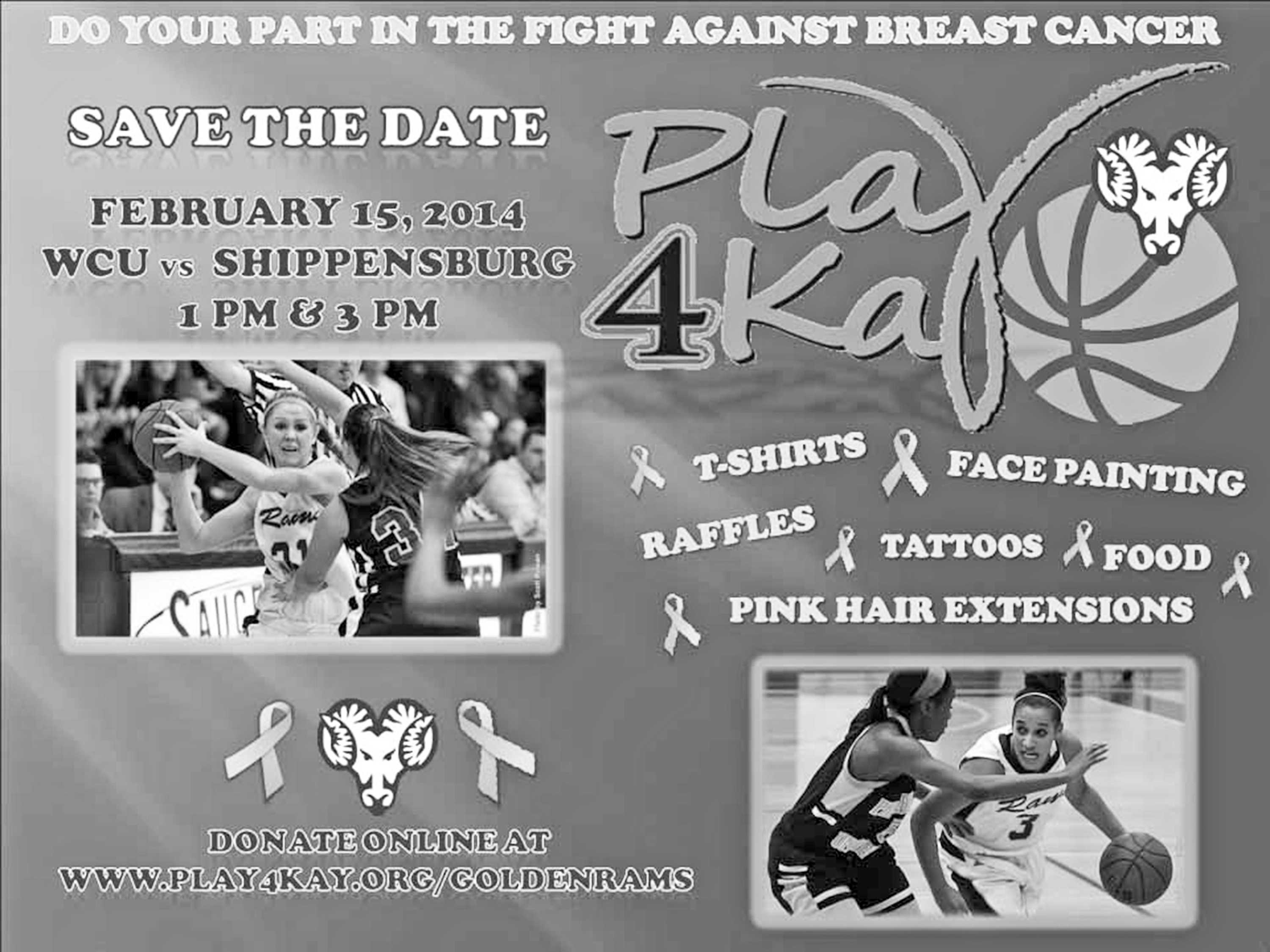 On Feb. 15, the West Chester women’s basketball team will be holding their annual Pink Zone game to benefit the Kay Yow Fund and the fight against breast cancer.

The game will be played at 1 p.m. in the Hollinger Field House, which will also be home to many great festivities and prize giveaways, all benefiting the fund.

Over the past several years, the Pink Zone game has really taken off, becoming more of a campus-wide, and even town-wide effort.

“What makes West Chester’s version so unique is that it is a collaborative effort on campus and off,” said women’s basketball head coach Deidre Kane.

This year, the collaboration of SGA, Service Learning, SSI, Aramark, Zeta Tau, the Pan Hellenic Council, Colleges Against Cancer, the Women’s Center, the College of Health Sciences and the basketball pep band has made the Pink Zone game possible.

“It’s real meaningful to me to see the whole campus jump on board for a good cause,” Kane said. “Every year somebody new jumps on board.”

Two grants were also provided to help defray costs and ensure that volunteers are fed, leaving more money to be donated to the cause.

There has also been support from local businesses.

Barnaby’s of West Chester will be having a social on the evening of the Pink Zone game from 6-9 p.m., with all profits going to the Kay Yow Fund.

At noon that day, the “Pink Zone” will open behind the bleachers that are behind the team benches. There will activities for kids, lots of different food for sale and some chances to win great prizes.

“We have an auction with really great baskets to be won,” Kane said. “The Phillies donated an awesome basket as did [other] various clubs, organizations and athletic teams. Comcast SportsNet donated a nice basket with Sixers tickets too.”

Prior to the game there, will be a ceremonial tip off hosted by honorary chairman Vince Melogranna. Melogranna, who is the radio commentator for both the West Chester men’s and women’s teams on WCHE, lost his wife last year after a battle with breast cancer.

“He is always there and supportive,” Kane said. “It was very sad last year when he lost his wife. He has been on the Pink Zone committee, even before he lost his wife, so having him was a no brainer.”

The charitable endeavors do not end on Feb. 15. New this year will be a Play 4 Kay March Madness tournament hosted by Recreational Services. All intramural basketball teams, regardless of the level, are invited to participate in the one day, three-game tournament that will take place on Feb. 23. All participants will receive a T-shirt and will have a chance to win Barnaby’s gift cards. The cost is $15 per player, and registration can be completed on the Rec Services website.

If you would like to help the Golden Rams’ fundraising efforts, please visit www.play4kay.org/goldenrams and donate to their “Play 4 Kay” team.

Kenny Ayres is a fourth-year student majoring in communication studies with a journalism minor. He can be reached at KA739433@wcupa.edu.