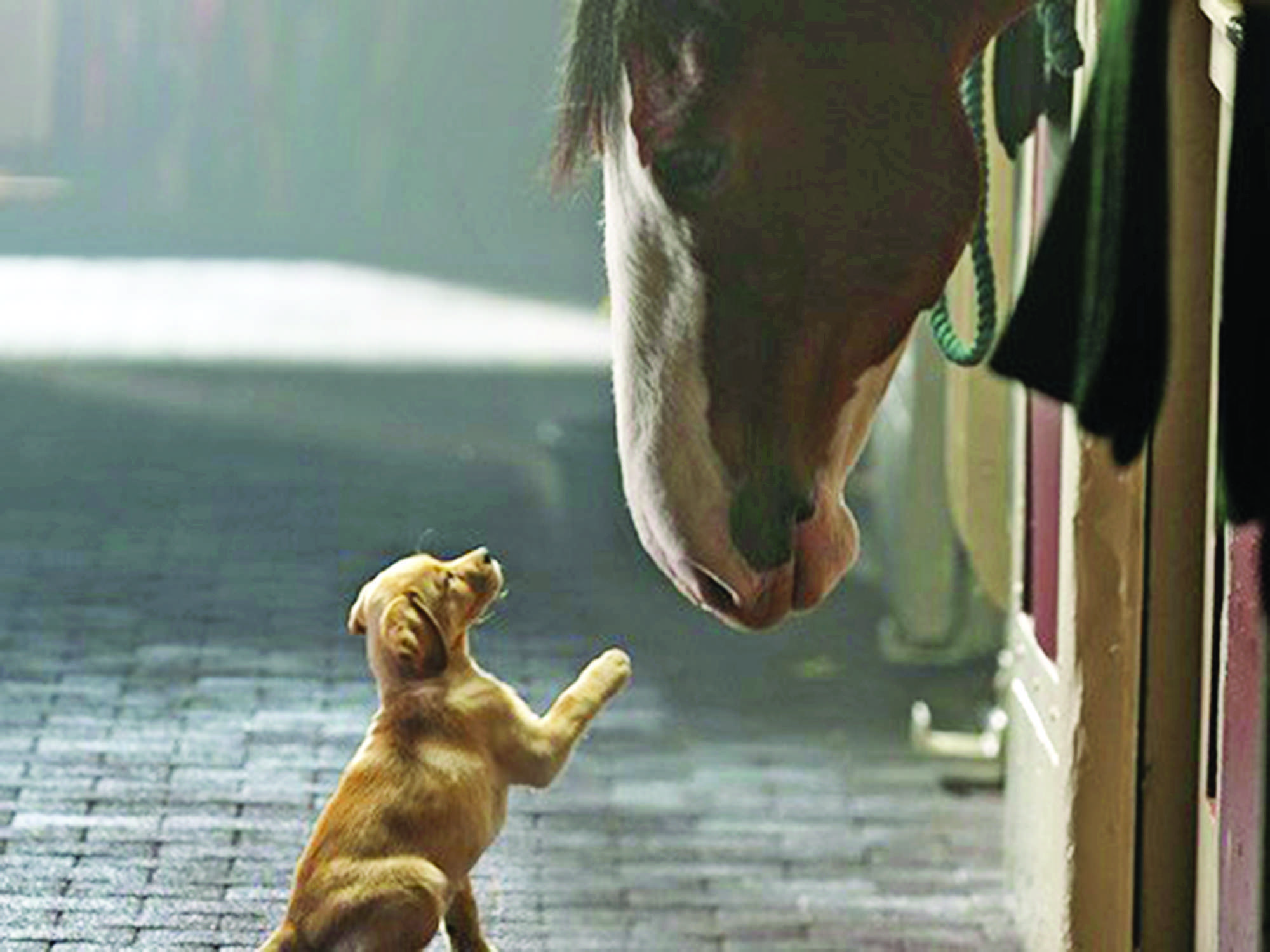 One of the most anticipated commercials of the Super Bowl each year features the Budweiser Clydesdale; pulling their red, white, and gold beer wagon. The origin of the Budweiser Clydesdales dates back to April 7, 1933; brewery owner August Anheuser Busch, Sr. received them as a gift from his son, August A. Busch, Jr. The wagon pulled by the horses contained the first case of post- Prohibition beer from their St. Louis brewery.

The tradition of featuring the Clydesdales in their (Anheuser-Busch) commercials began in 1986, during Super Bowl XX. If you ever find yourself searching YouTube for random things to watch, make sure to type “Budweiser Clydesdales, Super Bowl” into your search bar. It is interesting to watch how they have evolved over the years. For example, the first commercial that aired featured a group of Clydesdales simply playing football, with two cowboys looking on and making comments – basically just advertising the beer. The next year featured two Dalmatian puppies separated at birth, a story that tugged at your heartstrings. One puppy grows up to become a fire station dog and the other the Budweiser Dalmatian. As they pass each other on the road three years later, (the fire dog on top a fire truck and the Budweiser dog atop the red and gold wagon), the Dalmatian atop the wagon sticks his tongue out at the other dog, insinuating that he got the short end of the stick being picked by the firefighters. The commercial’s ending is comical, and plays on our emotions. We were sad in the beginning as the puppies were separated, but happy in the end when we see each ends up alright.

When Sept. 11, 2001 hit, we viewers saw a more serious side to the commercials. The team is out riding through the streets, obviously determined to get somewhere. Suddenly, the New York City skyline comes into view, and the team comes to a halt, looking at the space where the Twin Towers should be. The first two Clydesdales kneel to show their respect for those lost, and the rest of the team follows. Real life game day scenarios are applied to their commercials as well. In 2003, we see a hoof planting slightly in bounds (or out of bounds, it isn’t determined), again and again as it is replayed over and over. The camera zooms out, and you see a zebra with his head under the hood, checking to see whether the hoof is in or out. This is something you often times see at games, something taken really seriously. It is funny to see the company make a light hearted joke out of the whole situation.

Friendship is a big theme being displayed in the commercials. Last year’s featured a young Clydesdale and his trainer. The colt goes on to become a Budweiser Clydesdale, and three years later recognizes his trainer at a parade. The camera zooms out on the trainer embracing the gentle giant, an extremely heartwarming conclusion. The company uses genius marketing techniques, as they invite the viewers to help name the baby Clydesdale seen in the commercial by tweeting at them.  One of this year’s two commercials features the same trainer. Next to his farm a woman is giving out puppies for adoption, and one happens to make its way over to the horse’s stable. The horse and puppy stare at each other, and an instant friendship is made. The trainer takes the puppy home, and over and over he escapes to see his new friend. Eventually, the day comes that the puppy is adopted. As he is being driven away by his new owner, the driver slams on the brakes, as his car is surrounded by multiple “gentle” giants. The commercial ends with the group trotting home, their little friend galloping ahead, made perfectly clear that his home is where they are.

The second commercial this year featured a soldier coming home from war. Personal video is used of him coming home from the airport and meeting his significant other, a heartwarming detail. As they get closer to home, there are signs everywhere, “Welcome home soldier!” and a parade in his honor, where his mother is at the end. Again, the company dwelt on real life events to create this year’s commercial.

Over the years, the Budweiser Clydesdales have evolved from just a simple advertising campaign to the most anticipated commercial of the Super Bowl. I look forward to what next year will bring!

Ashley Cantasano is a second-year student majoring in marketing. She can be reached at AC784683@wcupa.edu.

One thought on “Budweiser Clydesdale’s steal the Super Bowl”