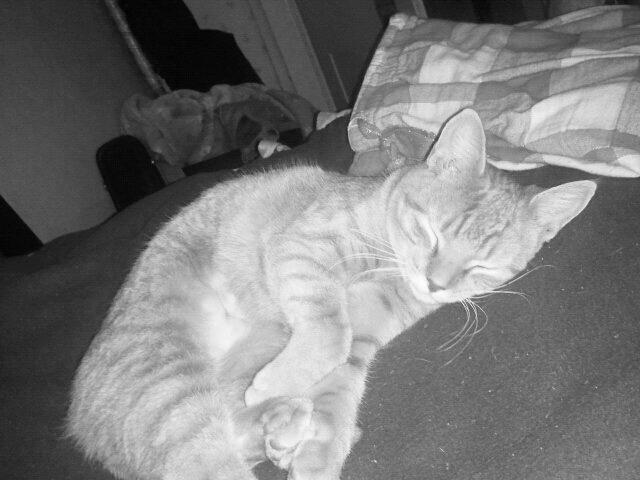 Five out of ten dogs and seven out of ten cats are destroyed simply because there is no one to adopt them (ASPCA.org).  That statistic alone is a disappointing and astounding. Although these lives might not be human, they are still carelessly thrown away because they are considered “unwanted.” With countless animal shelters around the country, it is surprising to know that many animals go un-adopted but with the rising number of no-kill shelters, the livelihoods of animals are starting to improve.

However, according to the American Veterinary Medical Association, 63 % of households have a pet and according to the Pet Food Institute, dogs are owned by 75 million people in the United States. Cats take the gold medal in the most owned pet in the U.S. with cats being owned by 85 million U.S. citizens.

With that many dogs and cats being owned, it is surprising and sad to know that 5-7 million dogs and cats and other “companion” animals are brought to animal shelters and 3-4 million are euthanized because they were kept at adoption shelters too long and never adopted (APSCA.org). So how can we prevent these lives from being ended?

According to the Animal Planet, animal shelters are the best place to get a house pet. Shelters have a great selection of both adult animals and baby animals and most shelter animals are eager to find their “forever home.”

“Animals from a shelter are typically already given vaccinations, and are altered before they may go home,” Bonnie Balmer, a cat socializer at the Humane Society of Harrisburg said. “This is important if you are a responsible pet owner.  A free dog or cat is never free once it has been to the vet for spay/neuter, and shots.  Also dogs from a shelter undergo “temperament testing,” this is a very thorough test to check if the dog gets along with cats, children, other dogs, and people, if it guards toys, and food.” Many people are against breeding and opt for adoption as a choice.

“The benefits of adopting over breeding are numerous for both animals and their people,” Sharon McElwee, a volunteer for Stray Cat Blues and Boxer Rescue, said. Stray Cat Blues and Boxer rescue are both based out of Pa. “When you adopt versus breed, you are saving a life of an animal that will probably be put down.” McElwee also noted that adoption fees cover food, medicine, and other items.

This shows that animals that are brought in shelters are not just animals that have been cast away and have no hope. According to the Animal Planet, some animals are given up because of a lack of understanding of a certain breed of animal. Different dogs require a wealth of knowledge in order to train and understand them. Most people just see a dog’s cute face and do not think that they require special attention and understanding of the breed. The Animal Planet says that most shelters have animal training classes and behavioral counseling so as to prepare an animal for adoption. This gives the animal a more marketable approach.

Shelter friends can make remarkable and life-long friends. “The benefits for you and the animal are true love. Animals know what shelters are and love even more when you pick them to take home,” McElwee said

“I have adopted a cat (Honey) in 2011, and a dog (Ginjer) in 2012.  Honey was a stray when she was brought to the shelter; she was just over a year old.  They had named her “Moose” at the shelter not realizing that it was a female,” Balmer said.   “She was so friendly when I was socializing her, she purred every time I visited with her.” Balmer took it as a sign and adopted Honey because “normally once I am home I don’t think about specific animals.” McElwee has also had similar experience in adopting animals that she has worked with before.

“My first two cats were from Morris Animal Refuge, a great shelter in Center City Philadelphia. It was 23 years ago when I adopted Rascha and Marissa,” McElwee said. Her cat, Marissa, died a few years ago but that has not stopped her from helping out other animals. She carries on Marissa’s memory by helping out other cats that are in need. “I now have three girls, Chloe, Cassandra and Babu. Chloe was in the last litter of Romeo and Juliet, a feral cat couple we tried to rescue for four years. Cassie was actually in the Euthanasia room when she was found by Stray Cat Blues and taken into foster care. She is pure love. Babu was found roaming the streets so malnourished. She had no hair at all and infections all over her body. Another wonderful foster mom of Stray Cat Blue’s took her in.”

McElwee has had a lot of experience in both volunteering and fostering dogs and cats.

“I have adopted six cats and fostered over 25 cats and dogs,” McElwee said. “You cry tears every time one of your fosters is adopted. You are sad, as you will miss that special animal and happy because you were able to help them to the point of adoption. The best though is when your neighbors and friends adopt one of your foster dogs. Then you have the best of both worlds!” One of McElwee’s favorite adoptions was a cat named Duke of Chatham. “The stories I could tell about him could fill a book. He was an indoor/outdoor cat [not recommended] and had the entire neighborhood in his pocket,” McElwee said.

Fostering an animal is one way to help with saving them. When someone fosters an animal they are taking care of the animal in their home until the animal is adopted. Volunteering at a shelter can also be very beneficial to animals. Many SPCA, and specifically Chester County SPCA depend on their volunteers to help them out.  For more information on their volunteer program, go to http://www.ccspca.org/volunteer/.

The Chester County SPCA not only is a shelter but they also help rescue animals in terrible situations. According to Amy Rossi, Philadelphia Animal Welfare Examiner, a CCSPCA officer, Craig Baxter, received a call regarding a pit bull that was discovered at the side of a road in Coatesville, Pa. Radar, the pit bull, was taken in by the CCSPCA and will be nurtured back to perfect health. Radar is suspected to be a victim of a dog-fighting ring. He will be quarantined for six months to make sure that he does not have rabies and then Radar will be up for adoption. Things are already starting to look up for Radar and according to Rossi, he was playing with the staff of the CCSPCA. The CCSPCA encourages anyone who may know any information about dog fighting to call 610-692-6113.

It is little acts like the one from the CCSPCA that helps the wellbeing of animals. Shelters all over the country are trying to improve the conditions for animals. Best Friends Animal Society, located in Kanab, Utah, was responsible for taking over 20 dogs that were rescued from Bad Newz Kennel, which was owned and operated by Philadelphia Eagles quarterback, Michael Vick. Best Friends rehabilitated the dogs and helped them pass their “Good Canine Citizen” test. Most of the dogs have been adopted and are now in good and loving homes; some are even therapy dogs. Delaware Puppy Rescue is a rescue agency that brings education and awareness on positive training, spay/neutering, and other healthy benefits for dogs. They are also an adoption agency for unwanted and homeless dogs in the area. The Humane Society not only helps cats and dogs but they are the biggest animal welfare group in the U.S. Stray Cat Blues, a cat rescue based out of Colmar, Pa. is a non-profit and no-kill organization dedicated to rescuing cats and finding them a loving and caring home.

Heroes are everywhere for animals. Everyday, these heroes are fighting for the justice of these lives that are just thrown away. When someone saves an animals life, they are grateful. James Cromwell once said “Pets are humanizing. They remind us we have an obligation and responsibility to preserve and nurture and care for all life.” Take this message and advocate for animal rights, be the voice for the voiceless.

Angela Thomas is a fifth-year student majoring in English. She can be reached at AT683005@wcupa.edu.