Skiba and Steinbrick are heavenly 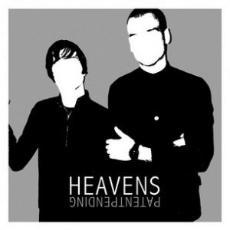 The concept of a side-project band is always a risk to run regardless of whose side-project it is. Critics are usually quick to jump on the work, calling it a cheap knock-off of what the main band has already done, or dismissing it entirely as being a stretch from what previous music has shown. It’s a tough job to make it with a side-project and to present something entirely different from what you are known for. It’s even tougher to do this while presenting a finished product that can stand on its own and be enjoyable. For Heavens, this was a risk that has paid off. The brainchild of Alkaline Trio’s Matt Skiba and F-Minus’ Josiah Steinbrick, Heavens released their debut album Patent Pending early in September.

Heavens was actually formed after Skiba had moved from his home in Chicago to Los Angeles, where he ultimately roomed with Steinbrick. On one particular day, as they were listening to records in their apartment, Steinbrick puts on a cassette of instrumental tracks that he had composed himself. Even without lyrics, Skiba found the tracks to be amazing, enough to merit writing lyrics to later on. Thus, in the summer of 2004, the two roommates converged and the album was written.

What was heard on those instrumental tracks is fairly close to what is presented in Patent Pending. Steinbrick appears to have not missed any point in composing the tracks as each one is strong for what the particular song’s sound is. The few harder tracks of the album are lined with stronger drum beats and solid guitar. With the remaining tracks that are typically slower and drearier, each sound keeps up to a fitting level without falling into the dilemma of drowning each other out. Overall, Steinbrick’s music sticks true to a more electronic, almost eighties-inspired sound that is thick with layers of various effects that show a certain complexity to his composing.

The problem that arises from the side-project band is losing a fan base through experimentation, or lack thereof. Whether the finished product sounds too much like the main band’s sound or whether it stretches too far from the sound best known for is something that is ultimately up to the fans to decide. It should come as a comfort to some that Skiba manages to find a nice middle ground in his lyrical writing for Patent Pending. While Skiba has managed to maintain a certain dark side with his lyrics for Alkaline Trio material, his writing with Patent Pending takes a more metaphorical turn as each song of the album is thick with images of tragedy, broken relationships, heartbreak and personal anguish. Whether it’s a song about a girlfriend painting dead children and hanging out in the cemetery (“Heather”) or that downright stalker-feeling (“Watching You”), Skiba presents this certain feeling of bleakness, it is never so much as to bring the listener down with him.

After putting the lyrics to music, the album itself is not one that will bring you down to a level of torment. Although the lyrics do provide a definite sense of dreariness, the music holds the listener up by remaining light and fluid but not to the point of being too “pop-punk”. In fact, not much of Heavens is about punk at all, although both members’ main bands could be considered so. The album, as a whole, could easily be seen as having slight ties to the emo and pop-punk worlds. Heavens have a certain “something else” about them that will bring listeners on a journey to a darker side of rock music.