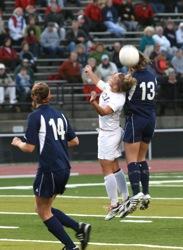 A chill in the air did not stop the No. 2 women’s soccer team from finishing their regular season Saturday afternoon with a bang, sinking Shippensburg 3-0 in Farrell Stadium. The Golden Rams have added another notch in their undefeated season for a record of 18-0 on the season and 12-0 in the Pennsylvania State Athletic Conference. The 12 victories set a new team record for conference wins. The Golden Rams are unbeaten in their last 24 conference match-ups.

The Golden Rams will head to the PSAC semifinals Friday afternoon, facing the winner of the Shippensburg vs. Kutztown game.

If Shippensburg defeats Kutztown, the regular season finale for the Golden Rams could very well be a preview of their first playoff game, and the future looks promising.

The Golden Rams came out strong, scoring the first goal of the game within the first 10 minutes of play. The ladies continued their solid start with Julie Karcher heading the ball into Ship’s net off of a feed from Lauren Boyer at 7:16 into the game. This goal was the game winner on Saturday. This goal came as no surprise, as the first eight minutes of play were down by the Ship net. It was only a matter of time.

Shippensburg seemed to have picked up their intensity a little after that, and held the Golden Rams to a lone goal in the first half. There were plenty of shots on goal coming from the Golden Rams, but no connection was made.

Not even ten minutes passed before Gerz made another connection, this time off of a feed from freshman Michelle Kolenet, knocking the ball right past the Ship keeper to add some extra security for the Golden Rams, bringing the final score of the game to 3-0.

Gerz has been a strong force for the Golden Rams for the past couple of games, scoring five goals throughout the last three games.

The Golden Rams head into the PSAC playoffs as host this Friday afternoon at 1 p.m. Tickets for the game are $7.00 for adults, $2.00 for students and free for students with school I.D.s from a PSAC school. 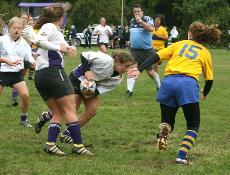