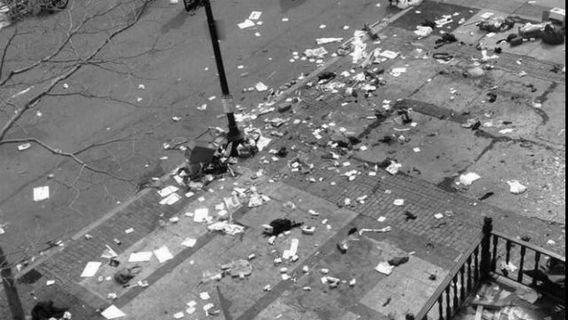 Last Monday afternoon two homemade explosives went off near the finish line of the Boston Marathon. Exploding within seconds of each other, the damage to people gathered for the world-renowned race was tremendous. The bombs killed three people and injured 176, most of whom sustained devastating damage from shrapnel.

Authorities said nails and ball bearings were stuffed into the explosives by their makers to widen the footprint of bodily harm to the spectators of this event.

Sadly, among the dead from this dreadful tragedy is eight-year-old Martin Richard of Dorchester, Massachusetts. Another was identified as 29-year-old Krystle Campbell of Arlington, Massachusetts. Her grandmother, Lillian Campbell, chose to speak about the late Krystle in a one-on-one interview with CNN.

“All the time she smiled…She made me happy, I used to look forward to her coming over to see me… She loved life…Her disposition, her attitude, her bubbliness! She was bubbly all the time, and laughing,” Campbell commented.

The third victim to lose their life from this bombing was identified as a Chinese national in her 20’s by China’s consulate in New York. The Shenyang native, Lingzi Lu, was a graduate student at Boston University. She studied mathematics and statistics, and anticipated to graduate with a master’s degree in 2014.

Runners united to try to make what progress they could in saving the lives of those injured. Some ran directly to the nearest hospital to give blood, knowing it would be greatly needed. Others literally ripped off their own clothes creating tourniquets for the wounds of the dozens injured in the streets. The scene of pulling together amidst the chaos and confusion of the event is a great demonstration of the selfless compassion the Boston citizens have for their fellow countrymen in that situation.

The Secret Service reacted accordingly to a domestic bombing protocol, by expanding the perimeter of security around the White House. Speaking in terms of the sheer magnitude of the explosions, this act did not reflect that of traditional terrorist attacks on our soil such as the trade center bombings in the 90’s or the 9/11 attacks in 2001.

On Tuesday, April 16th President Obama made a statement regarding the explosions at the Boston Marathon. He touched down on how this act is being treated by the FBI, and expanded on what authorities plan to do.

“This was a heinous and cowardly act.  And given what we now know about what took place, the FBI is investigating it as an act of terrorism.  Any time bombs are used to target innocent civilians it is an act of terror.”  FBI Special Agent Rick Deslauriers commented that from the remains it can be suggested the contents of the explosives were in a pressure cooker inside a nylon bag. The remains also aided determining that the bombs were probably on timed detonators as opposed to using remote detonation.

Authorities have identified the perpetrators as Tamerlan Tsarnaev, 26, and his younger brother, Dzhokhar Tsarnaev, 19. The 26-year-old was killed in a gunfight with police early Friday morning, after citizens reported the pair for robbing a 7-Eleven. The younger Tsarnaev escaped the gunfight, and hid from police until late Friday evening, when he was found in a tarp-covered boat in a Watertown backyard. Tsarnaev’s body heat was detected by airborne thermal imaging, which is what led to his capture.

Tsarnaev is being held in critical condition until he has recovered enough to respond to police questions. Boston authorities are eagerly awaiting Tsarnaev’s recovery, so they can interrogate him. “We have a million questions, and those questions need to be answered,” says Boston Gov. Deval Patrick.

Tsarnaev’s family denies that the 19-year-old was a critical player in the bombing. Ruslan Tsarni, Tsarnaev’s uncle, said that Tsarnaev was “used” by his older brother to carry out the attack. Tsarni also says that his nephew, Tamerlan Tsarnaev, recently became associated with Islamic extremism. He began to use words like “jihad” without understanding their true meaning, says Tsarni.

This past week is not the first time the U.S. government has dealt with Tamerian Tsarnaev. In 2011, at the request of the Russian government, the FBI questioned and later released Tsarnaev. The 26-year-old had just returned to the U.S. after spending a year in Russia prior to the bombing.

Nicholas Devoe is a fifth-year student majoring in English. He can be reached at ND626335@wcupa.edu.

Residents celebrate in Watertown, Massachussetts, after the arrest of a suspect in the Boston Marathon bombings on Friday, April 19, 2013. (Photo by John Wilcox/Boston Herald/MCT)