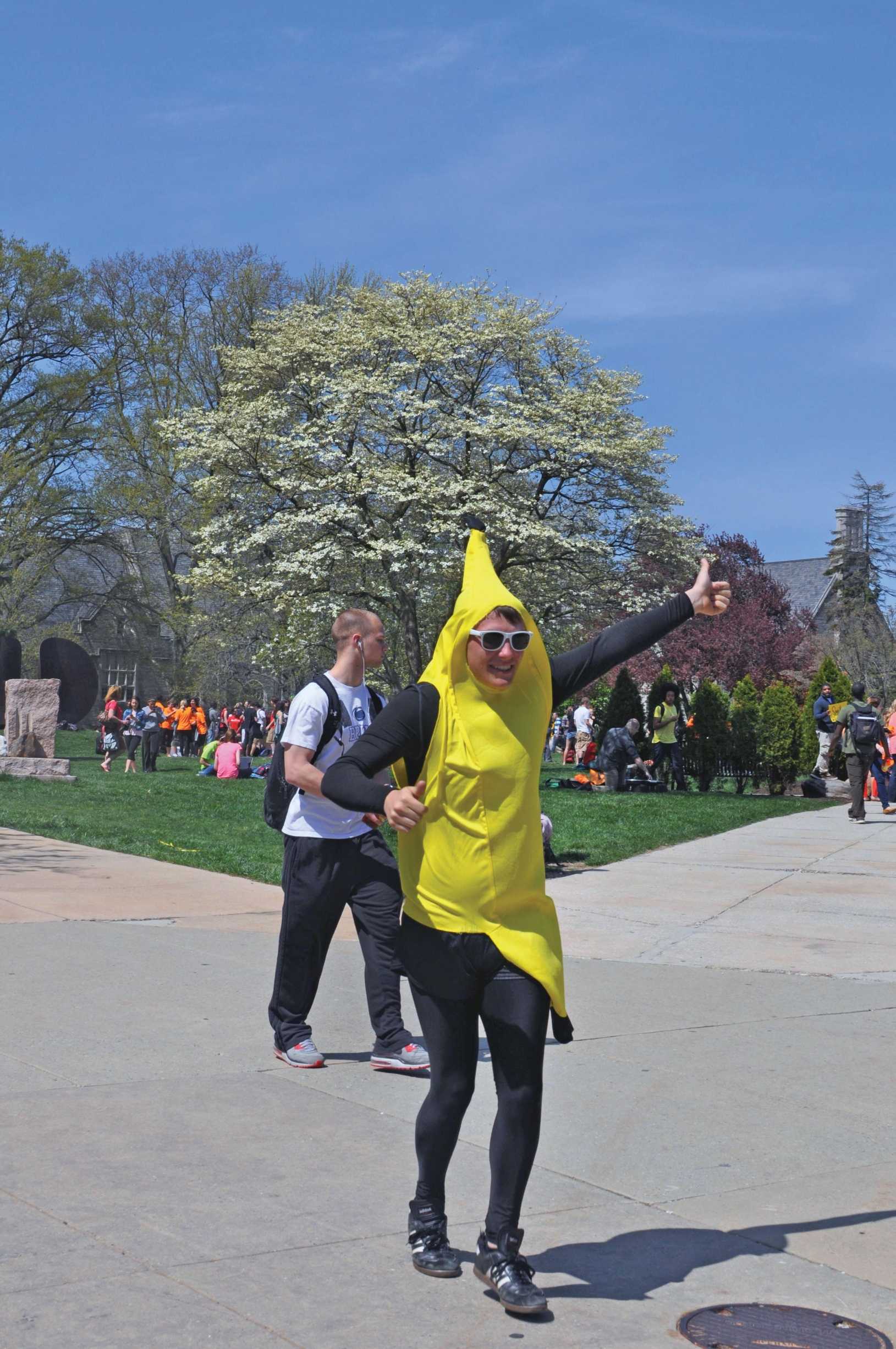 On April 24, WCU held its 17th annual Banana Day. Banana Day is one of the most unique things about WCU, and many students were eagerly counting down the days.

If someone were to ask a WCU student why Banana Day exists, the student would probably be puzzled. This is understandable only because no one is entirely sure how Banana Day started. There is some speculation that Banana Day was started by a nutrition major who spent the day handing out bananas, but it has ballooned severely in the last seventeen years – and now there are committees dedicated to planning for it, 1,000 free T-shirts printed, and Banana Day countdowns all semester long. Furthermore, if someone were to ask even what Banana Day is, the student would probably laugh and say, “You just have to be there.”

“My favorite thing about Banana Day is that it brings everyone together,” said student Colleen Curry. “Even the shy people can’t resist. And you get free bananas and entertainment!”

Arguably the best thing about Banana Day is the free t-shirts. 1,000 T-shirts are printed and given out for free to students who win games and answer trivia questions correctly. At a school of over 15,000, to say that getting a shirt is competitive would be a colossal understatement. This year’s fluorescent orange shirts displayed a clever pun on an old joke: “Orange you glad it’s Banana Day?”

There were activities happening and bananas being handed out in areas all over campus. The academic quad boasted a schedule packed with banana games, trivia, relay races, and a 50/50 raffle. Some of the games on the academic quad included hula hooping, dizzy bat, and a fastest-banana-eating contest. The residential quad, on the other hand, had a Big Butt Battle blowup game involving players who wore inflatable, Velcro butts and trying to shove each other down to get stuck on the Velcro bottom of the blowup, as well as wheel barrow races, and more banana games and trivia.

WCUR had DJs set up on the Sykes patio to do t-shirt giveaways and  play music, while in the ballrooms, there were banana games and trivia, as well as a mechanical surfboard and banana-themed snacks, including banana bread and banana smoothies. There were also banana games and trivia happening at the south campus clubhouse, and many bananas were given away on east campus outside of Swope.

Something new this year was that five golden bananas were hidden around campus. Students who found a golden banana could go directly to Sykes 256 and claim their shirts, rather than having to compete for them.

WCU also had a special visitor for this Banana Day: Jengo the monkey, who was very friendly with many of the students playing on the quad. There was also a large number of students who got into the Banana Day spirit by wearing big banana suits.

Banana Day was from 11 a.m. to 3 p.m., and then Banana Night, hosted by the Purple and Gold Club, began at 6 p.m. Students who attended Banana Night could eat chocolate-covered bananas and win special Banana Night t-shirts. WCUR was there to provide music, and there was even a Gangham Style dance-off to win the last three shirts, provided by the WCU Foundation.

“The idea was to piggyback off of Banana Day because we realize that many students cannot partake in the festivities during the day because of classes or student teaching,” said Purple and Gold Club president Andrew Wagner. “We wanted to push ram pride and school spirit and just have some fun.”

Banana Night was supposed to last from 6 to 8 p.m., but it was so popular that they had to pack everything up early.

Overall, Banana Day could be considered nothing but a success. According to SAC president Paige Budin, “Banana Day 2013 was a huge success. Many thanks to all of the organizations that helped out and got involved to make this day possible.”