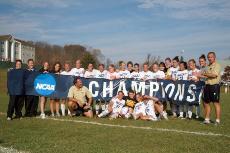 Squeals of excitement about Florida and the NCAA Division II Championships rang loud and clear, as ice cold water was dumped on Head Coach Gerry Lucey as the No. 2 West Chester Golden Rams celebrated their 2-1 victory over the No. 6 Franklin Pierce Ravens during Saturday’s NCAA Division II Quarterfinals match-up. The Lady Rams head to Pensacola, Fla., to participate in the NCAA Division II semifinals for the first time in school history. They face No. 12 Metro State of Denver, CO, on Thursday for the first match-up of the championship tournament. If they beat Metro State, they will face the winner of the Grand Valley State and Tampa semifinal match-up. If Tampa and West Chester head into the final game against each other, it should prove to be an interesting match-up. Gerry Lucey was the assistant coach for Tampa until he was hired one week before the Lady Rams started their preseason this year.

This year’s quarterfinals game had a sort of dj vu feeling, but with a different ending, as it was the second year in a row the Golden Rams faced the Ravens in a quarterfinals match-up. The game was played in Rindge, NH, in 20-degree weather when the Ravens halted the Golden Rams pursuit of the championship tournament in Florida. This year, the Lady Rams had home field advantage, the temperature was in the 70s with unusually beautiful weather for November and revenge was on the Lady Rams’ minds.

The Ravens scored the first goal of the game 10 minutes into the second half. For awhile, it seemed as though the Golden Rams’ fate was sealed, but thanks to red shirt Rita Alton punching in a goal with only 16 minutes left in the game, sophomore goalkeeper Hilary Smart with two of her most crucial saves of her career and first year student Michele Kolenet striking the ball past the Ravens goalkeeper with only 50 seconds left in the game, the Golden Rams earned their trip to Florida this year.

“I honestly thought Franklin Pierce was going to take [the game]. They were definitely the strongest opposition we’ve faced this season,” said Lucey. “I tried to stress the importance of the first goal of the game, but we’ve been behind twice this season (both to IUP), and we always come back with fire.”

Frankline Pierce’s Head Coach Jeff Bailey commented, “For the first 75 minutes, I thought we were in control, but the momentum shifted and we never really regained control of the midfield. It just isn’t our year. [West Chester] got the ball at the perfect time.”

Saturday’s game started out with the Ravens taking the kickoff. The Ravens looked confident coming into the game, despite WCU’s 22-0 record and No. 2 ranking. The Ravens came into the game with an 18-2-1 record. Both teams were very aggressive offensively during the first half, but the Golden Rams defense, headed by Senior Captain Casey McKinney, had the Ravens beat. During the first half, despite many scoring opportunities, neither team connected with the ball and the scored remained tied 0-0 at the half.

The Golden Rams had almost earned an advantage off of a corner kick near the end of the first half. From afar, it looked like a goal for West Chester as the ball sailed across the goal line, but a foul was called on the Golden Rams and a goal kick was awarded to the Ravens.

At the end of the first half, it seemed as though West Chester had a small marginal advantage over Franklin Pierce, but when the whistle was blown to start the second half, the Ravens had other plans in mind. Within the first three minutes of the second half, the Ravens came close to scoring the first goal of the game twice, once off of a corner kick and the other just a shot on goal. Fortunately for the Golden Rams, Smart tipped the ball away both times.

However, the Ravens were relentless and seemed to be playing smarter. Whatever it was that sparked their new found intensity, it worked as Gabriela Demoner slid the ball right past Smart in the lower left part of the goal just 10 minutes into the second half. This would be the last time the Ravens would get past Smart.

Both teams created many opportunities for a goal throughout the second half. Perhaps one of the biggest opportunities for the Golden Rams came after forward Lauren Ginnona was tripped inside the 18-yard box, and WCU was awarded a free kick in the right corner. Brittany Yetter sent it sailing over all of the players on the field and straight for the goal, but the Ravens goalkeeper made no mistake in halting the attack.

Alton’s goal helped restore the momentum the Golden Rams had lost when the Ravens punched in the first goal of the game.

“Rita’s goal wasn’t the prettiest, but it was huge- a massive lift. It really changed the mood of the game,” said Lucey.

“It’s an amazing feeling to come out on top. I just tapped through some defenders, and it’s a great feeling to have scored a goal as a redshirt freshman,” said Alton.

After Alton’s goal, both teams were playing more intense than they had all game, knowing that the next goal would determine the victor. The Ravens tried to retaliate immediately after Alton’s score with a shot on goal only 30 seconds later, but it was tipped to the right side of the net. Yetter had another shot on goal for the Golden Rams, but the goalkeeper halted her attack again.

“I thought it was over, but Smart just came up huge and we wouldn’t be where we are without those saves,” said Lucey.

“I gave [Demoner] her first goal and I just wasn’t about to let her get another one. I saw my ticket to Florida. We played so much better this year, and with so much more heart,” said Smart.

With overtime almost a certainty, the moment everyone had been waiting for arrived with only one minute to go in the game. Kolenet stormed down the right sideline. She took the ball with her left foot, and sent the ball straight across the goal, right in front of the keeper, and buried it in the left corner of the net with only 50 seconds left in regulation. All the Golden Rams had to do from there was stop the Ravens from getting close to the goal within the next 50 seconds and victory would be theirs. That’s exactly what they did.

“Michele has scored big for us before, but none bigger than that,” said Lucey.

“I have never played with so much heart. [This] means so much to the seniors. I did it for them. This is definitely the biggest moment of my soccer career. I just beat a player, cut back, and luckily the ball went under the keeper,” said Kolenet.

This was the second week in a row the Golden Rams rallied back from a one goal deficit to take the victory and keep their postseason alive. This victory marks the 21st of the season for Smart in net. She is now 31-1-1 as a sophomore, and needs only 11 more victories to tie the school record. Senior Julie Karcher has 66 goals in her career, and is just one shy of a school record. West Chester is now 23-0 on the season and is the only team remaining in Division II with an und
efeated record.