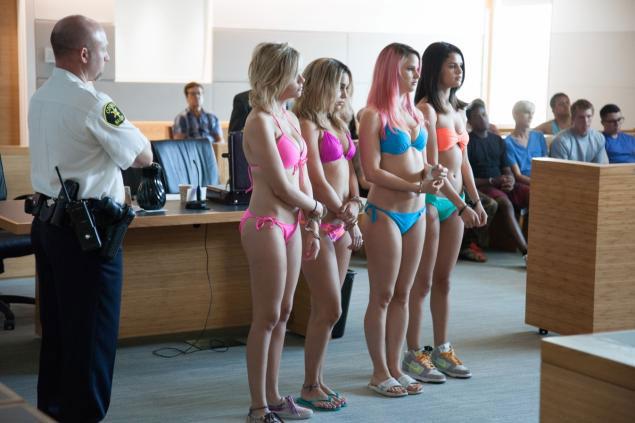 Sun kissed college students letting loose and soaking up the sun: the decline of western civilization starts here. These images conjure up feelings of an apocalyptic nightmare. If you have never heard of Harmony Korine, it might be easy to dismiss his latest film, “Spring Breakers,” as wasted celluloid, depraved garbage aimed at the lowest denominator. This actually isn’t the case.

Korine first grabbed the public’s attention with his socially-aware 1995 film, “Kids.” It was a wake-up call to parents everywhere about the activities in which their children were participating. The year is now 2013 and Korine’s “Spring Breakers” chimes in with his input once more.

Yet again, the film is more of a social commentary on our current youth culture. At the same time, the movie is a surreal experience without a real narrative or plot. Some scenes feel all too real and tragic. The film begins with the four lead characters combining their efforts to garner up enough cash to go on Spring Break. Right from the start, we learn these girls are not the most classy or admirable human beings. Save for Selena Gomez’s character named Faith (still not a saint by any means), who is a member of her church’s youth group and carries somewhat of a moral center the other three are lacking. The film floats toward a spiritual and religious theme, giving the film a deeper layer of interpretation.

After robbing a local diner to get a hold of enough cash (such sweet girls, right?), the crew boards the bus and heads for the beaches. The next chunk of the film consists of party montages, more than likely to provoke disgust rather than admiration. The clear intention here is to show the hedonism among teens and college students. Their debauchery is not meant to look very appealing, and from audience’s reaction, the film got that part down right. Be forewarned, in an effort to replicate an atmosphere of realism, director Korine does not hold anything back. Some of the images could very well have stunned mothers into running out of the theater.

When the film reaches its second act, we are introduced to James Franco’s character, a drug dealer. He bails the girls out of jail after they get arrested at a hotel party. He presents himself to be a figure of higher status, but as we come to learn, illusions of grandeur overtake his persona. He does possess a bit of wealth, but he is still one of the smaller fishes in the business. What results from his presence is a turn for the worse; the girls are reeled in by the allure of higher status living. Although, before “it” hits the fan, Gomez’s character, Faith, is wise to make a run for it.

Not just a critique on where we are as a culture, but because the movie carries an atmosphere like no other, this film ended up being one worth watching. One of the film’s oddest sequences is a robbery scored to the track of a Britney Spears song. Franco sings it on the piano after hailing Spears as “one of the greatest singers of all time, and an angel if there ever was one on this earth.” The scene carries a tone that elicits laughs, and is strangely compelling. In short, it works and you cannot quite put your finger on why. If I had to offer an interpretation, the film is trying to imply our generation has a fascination with pop culture icons, who, when you get down to it, are not good role models. The lyrics try to offer emotional depth, but are more shallow than anything, just like the film’s central characters. In their sociopathic mindsets, it is an attempt to reach some sort of feeling. It is the closest they have to a heartfelt anthem. It also provides an intoxicating contrast to the malevolent images on screen.

Out of all the issues the “Spring Breakers” brings up, it keeps coming back to one of its universal themes: white privilege. There is not a doubt in my mind that director Korine was trying to say something about how easy white college girls are unscathed by consequence. Never once in the film do they suffer any repercussions of their actions. “Just pretend it’s a videogame,” the girls repeatedly say. Another scene to note is during the beginning of the film; the girls outright ignore a lecture on The Civil Rights Movement of the 1960’s because they are distracted by more hedonistic ventures. The girls are able to tip-toe around, and in some cases, outright avoid punishment stemming from their spoiled and entitled background. Films like “Project X,” “21 and Over,” and other modern teenage party films seem to advocate that this type of behavior has become regular.

Minors have been hypnotized by this Spring Break state of mind, and the idea of the American dream seems to now include the importance of sex and binge drinking. In the movie, the girls set out to find themselves on Spring Break. This is darkly ironic because there is nothing to find. It is an endless sea of people behaving sub-humanly and having no other real personality traits besides wanting to indulge in everything bad. But it is not all doom and gloom. The film still is a mockery of what it portrays and there are moments of humor scattered throughout, most often by Franco, who is so ridiculous it’s hard not to laugh.

All things considered, “Spring Breakers” is one of the few films that might be worth seeing in the first half of 2013. Make no mistake, it is most definitely an art film. Some moments are so oddly surreal their only real purpose is to embrace art for art’s sake. The film gets bogged down a bit in the middle with its pacing, but overall it proves to be a unique experience.

Rob Gabe is a second-year student majoring in communication studies. He can be reached at RG770214@wcupa.edu.