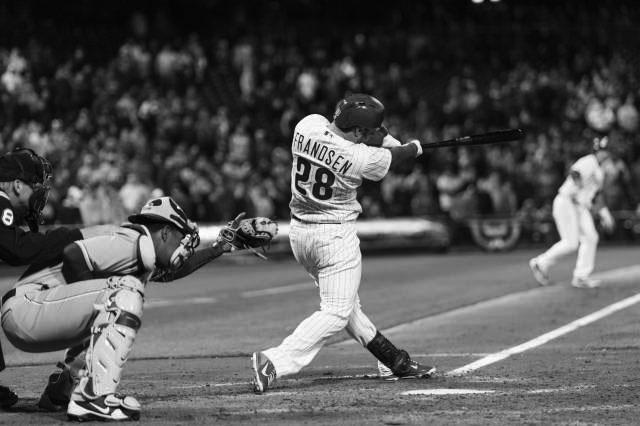 Through the Phillies first five games, certain things do not look any better than they did during the team’s dismal 2012 season. The bullpen has been giving up a ton of runs. Roy Halladay is a big question mark. The offense either does not hit, or only hits in the first few innings and goes silent for the rest of the game.

But don’t throw in the rally towels yet.

Despite the frustrating start to the season, there are already signs that his year will be better than last for the Phightin’s.

Games aren’t over in the seventh inning.

Back in the team’s prime between 2006 and 2009, come-from-behind wins were a fixture. If they were trailing by one or two after eight, it was half-expected they would come back. Last year, that did not happen.

The fact that Chase Utley, Ryan Howard, and Michael Young worked three straight walks to start a ninth inning when trailing by two is a tremendous sign that this team has a bit more patience and a bit more fight in them when trailing late in the game. Great teams come back from deficits and steal games once in a while, and to be great the Phillies will have to do more of that as the season progresses.

Cliff Lee has a win.

OK, this in and of itself means nothing. Yes, Cliff Lee got a win in his first start after not getting one until July 4 last year, but that is not the important part. What is important is that his first start was a vintage Cliff Lee start. He went deep into the game, walked nobody, had almost three times as many strikes as balls, and struck out eight while allowing just two hits. All of that was against possibly one of the best lineups in baseball, the Atlanta Braves. Last season Lee had a horrific mixture of no run support and terrible outings that contributed to him having a bad first half of the year. His first start this year looked really, really good.

Roy Halladay can throw hard again and strike guys out.

Do not let Doc Halladay’s line fool you. Yes, he only went 3.1 innings and surrendered four runs. He also had trouble commanding his fastballs (his sinker and cutter). However, he was throwing between 88-92 mph. Obviously, pitching is not all about speed, it’s location and movement. But the fact that Halladay is back throwing in the low 90’s means he really is as healthy as he says he is. That is one plus.

The other is that his offspeed stuff is still as filthy as can be. He recorded 10 outs in his first start, nine of them via strikeout. In fact, he was the first ever pitcher in Major League history to have as many strikeouts in 3.1 innings. Eight of his nine strikeouts came on off-speed pitches. His changeup and curveball were fooling hitters, unlike last year when everything was flat.

Keep in mind; he faced one of the best lineups in the game in his first start. Had he faced the Brewers or Pirates or Mets, he could have easily gone five innings and allowed three runs.

The fastball command is concerning, but that will come with time. The fact that he is healthy and able to compete again is the most important part right now.

Chase Utley had his first Opening Day since 2010.

Many people wrote off Chase Utley’s career after he missed the first half of the 2011 and 2012 seasons due to a chronic knee condition. He did not even play a single spring training game last year.

Oh, how things can change.

Utley not only played throughout the entire spring, he started on Opening Day and had himself a great performance. The former All-Star second baseman went 3-for-5 with a home run, triple and three runs batted in. He has knocked in three more runs in four games since then.

The triple was by far the best sign. He lined a ball in the right-center field gap, and the ball was played without bobble. Utley legged it out and managed to turn a double into a triple with shades of his pre-2010 speed.

Utley has found a new stretching routine that he does daily and since has had no pain in his knees, and no visible signs of slowing down despite entering his age 34 season.

There is a back end to the ‘pen.

There really should not be any positives coming from one of the worst bullpens in baseball in the young season, but there actually is one plus. It seems the Phillies finally have an eighth and ninth inning combo that will be effective in holding and closing out games.

Veteran reliever Mike Adams has pitched two innings so far this year and allowed just one hit while striking out three. In Spring Training he allowed just one run in nine innings. If he can be the bridge to Jonathan Papelbon, that makes one less inning that Charlie Manuel has to worry about leaving his starters in.

Papelbon has looked good in his only appearance so far as well, saving Lee’s first win with a 1-2-3 ninth against Atlanta.

This team certainly will not be the same team as 2008 and 2009. They are older, slower, and more banged up. But that being said, they are much more healthy and solid throughout the lineup than last year, when they still managed to finish .500. The Phillies might not win 100 games, but they will be contenders for a wild card spot or maybe even the N.L. East all season long.