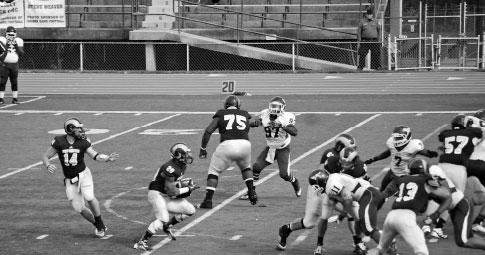 The Golden Rams scored touchdowns on their first seven possessions Saturday afternoon as they cruised to a 59-14 victory over cross-county rival Cheyney.

West Chester (6-3) won its 31st consecutive game against Cheyney (1-8) and lead the series between the two teams 44-2-1. The Golden Rams clinched their first winning season since 2009 with the victory and put up 50-plus points for the second time this season.

On a day where 15 seniors were honored before the game, the Golden Rams took to the attack quickly and often against the overwhelmed Wolves. Running back Rondell White got things started for West Chester, capping off a seven play, 68-yard drive with 21-yard  touchdown reception from quarterback Mike Mattei.

There was no slowing down, as on the Wolves next possession senior safety John O’Donnell took an errant Cheyney pass 70 yards to the house making the score 14-0 with over five minutes remaining in the opening quarter. After forcing a Cheyney punt, the offense put together a four play drive that covered 43 yards and concluded with a 20-yard run by White for his second score of the game.

The second quarter was much a continuation of the first as it was dominated by the home side. Tight end Justin Curry kept things rolling, catching his first career touchdown with about 13 minutes to go in the quarter, snagging a nine yard pass from Mattei. Fullback Jarad Bonaquisti found the endzone on the next two West Chester possessions running it in from two yards and one yard out to push the score to 42-0. Wide Receiver Nick Hall took an end-around seven yards to the house with under a minute remaining in half, giving the Golden Rams a very comfortable 49-0 lead heading into the break.

With the outcome all but certain the reserves saw most of the action in the second half. Kicker Shawn Leo put the only points on the board in the third quarter with his 22-yard field goal. With that field goal, Leo tied former kicker John Marotta for the most career field goals in West Chester football history with 30.

Cheyney finally pushed one across the goal line early in the fourth quarter making the tally 52-7 but the Golden Rams weren’t quite done yet. Backup running back Eddie Elliot plunged in from five yards out with less than 10 minutes to go in the contest, and the Wolves added a touchdown late to provide the final score of 59-14.

Cheyney’s triple-option attack did not experience much success against West Chester’s stout defense. They averaged a mere 2.2 yards per rush over 52 rushes compared to the Golden Rams average of 7.5 yards over 37 rushes. The Rams also scored on all seven of their red-zone trips, including six touchdowns.

Mattei put up very solid numbers in the first half as most of the starters’ day was over by halftime. He completed 7 of 12 passes for 117 yards and two touchdowns. His back-up, Drew Loughery went 2-for-3 for 26 with no scores or interceptions.

The receiving game was spread out pretty evenly as five players caught a total of nine passes with no one catching more than three balls. Adam Dempsey led all receivers with three receptions for 44 yards. White recorded 41 yards receiving and a touchdown to go with his 110 yards and a score rushing.

Linebacker Camille Max and Kayo Bakare led the way on the defensive side of the ball, as they each racked up 10 total tackles. As a whole the defense recorded an impressive 11 tackles for a loss and  five sacks.

Up next for the Golden Rams is a critical match-up with PSAC East contender Bloomsburg (8-1). West Chester’s hopes for advancing to the PSAC Championship game were dashed on Saturday, despite the dominant victory, as Shippensburg defeated Bloomsburg and now sit two games ahead of the Golden Rams with only one game before the PSAC Championship. West Chester can take a giant step towards grabbing one of the six regional playoff spots with victories over hosts Bloomsburg this Saturday and Clarion (4-5) the following Saturday. The game against Bloomsburg will kickoff at 1 p.m.