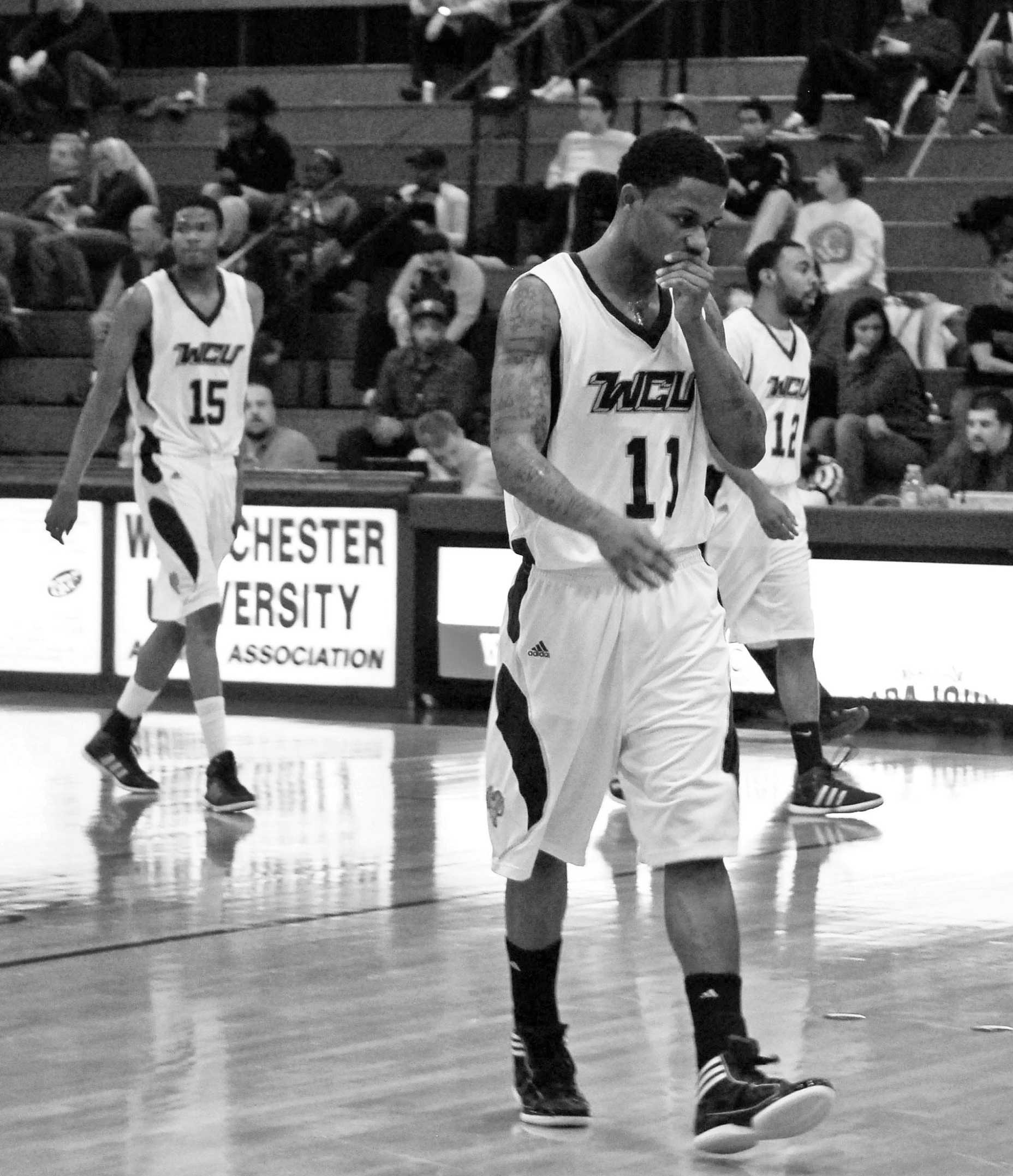 The Golden Rams started out fast against first-place Kutztown (14-7, 11-6), jumping out to a 7-2 lead behind a raucous crowd of over six hundred. The game was very fast paced as both teams were evenly matched.

West Chester (13-9, 10-8) stayed true to what has been successful for them over the past few weeks. Great team defense, ball movement, perimeter shooting, and perimeter defense have all been constants during West Chester’s recent hot streak. The Golden Rams’ team defense forced Kutztown into 17 turnovers to West Chester’s 13. They also assisted on more plays than the Golden Bears, recording 16 assists to Kutztown’s 10. The Rams were spot-on once again from behind the arc, shooting 50% while holding Kutztown to just 7 for 21.

In the first half, guard Jaleel Mack came off the bench and got the Golden Rams going, scoring 10 of his 17 in the opening half.

West Chester did an excellent job of preventing Kutztown from getting into any sort of rhythm offensively and maintained the lead for most of the half, taking a 46-39 lead in the break. The Golden Rams opened up the second half on a 17-10 run which pushed their lead to double digits. Kutztown hung around though and battled right to the very end.

West Chester practically lived at the foul line in the last twenty minutes, scoring just under a third of their points from the charity stripe.

The Golden Bears cut the lead down to 10 with 2:43 remaining, but they just couldn’t keep up with West Chester as it shot an unprecedented 73% from the field after halftime.

The Golden Rams went on to defeat Kutztown by a score of 103-88. This was the second time a team atop the PSAC East Division visited Hollinger Fieldhouse and left without a victory as Bloomsburg fell to the Rams back in mid-January.

Senior forward Lance McDowell led the way with a season-high 29 points to accompany his eight rebounds. Junior guard Jon Breeden scored 17, while assisting on seven plays and recording three blocks. Guard Carl Johnson was the other West Chester player to reach double figures with 11, but the production was there from top to bottom as all nine Golden Ram players scored at least four points.

West Chester’s second game of the week came on the road against the other team sitting atop the PSAC East standings, Bloomsburg (16-7, 12-6). The Golden Rams got off to a slow start and trailed 9-0 before they scored their first points. The lead was eventually stretched to ten at 22-12 just past the halfway point of the half. West Chester battled back though and trailed by only four going into the locker rooms. The second half was a much closer affair as neither team managed to extend a lead beyond seven.

The Golden Rams took control late when Mack hit a critical three and the Rams defense forced a turnover at the other end. Breeden hit two free throws and West Chester went on to win 74-71. The difference in the game came from behind the three point line as West Chester outscored Bloomsburg 27-9 and held the Huskies to just 3 of 15 shooting. McDowell led the team offensively as he scored 27 points and grabbed 12 rebounds. Johnson scored 12 to go along with a team-high five assists. Two other Golden Rams reached double figures as senior forward Khalif Foster and Breeden scored 11 and 10 respectively.

With West Chester’s two wins this week over top teams, they now pull within one game of East Stroudsburg who stands alone in third place, and two games behind Kutztown University and Bloomsburg for first. They look to continue on their hot streak as they now have won their last four games and seven of their last eight. The Golden Rams travel to take on a struggling Shippensburg team Wednesday night.

On Saturday, West Chester returns to Hollinger Fieldhouse for a crucial game against East Stroudsburg. With only four games remaining, this may very well decide who takes home third place in the PSAC East Division.

Riley Wallace is a third-year student at West Chester University. He can be reached at RW718681@wcupa.edu.