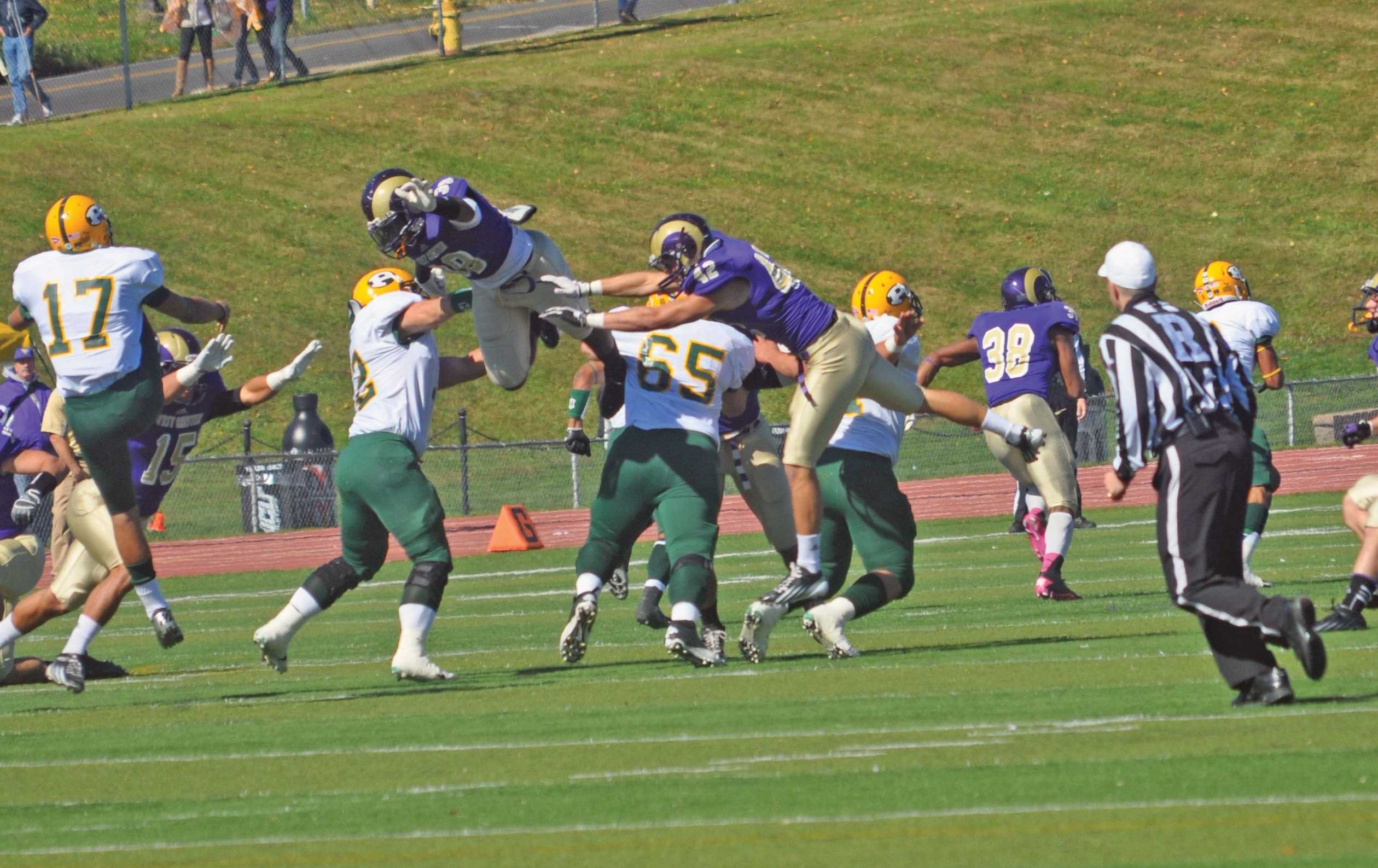 The Golden Rams bounced back from their first conference loss of the season, by defeating LIU-Post 41-6 behind the stellar play of running back Rondell White, who accumulated 343 all-purpose yards.

West Chester (5-2) improves to 3-1 in the PSAC East and gets back on the winning side of things after last week’s heartbreaking loss to East Stroudsburg. The Rams were trailing by 14 points with less than seven minutes left in the game, but never gave up, and after two consecutive touchdowns the game was tied at 28 with 1:10 remaining. The comeback hopes were dashed as the Warriors went 68 yards in one minute capped off with a 33-yard touchdown pass with only five seconds remaining to hand West Chester its first loss to a Division II opponent in 2012.

This week, the outcome was never in doubt after the Rams put up 17 points in both the second and third quarters. The Pioneers’ struggles continue as they have lost their last four contests after starting the season with a promising 2-0 record.

White got things going in the first for the Golden Rams as he scampered 38 yards for the only score of the quarter. The Pioneers responded with a score of their own in the second but failed on the point-after. A 7-6 scoreline in the first quarter would be the closest they got on this day as two touchdowns by West Chester, first on a 7-yard pass from Mike Mattei to Tom Shrader, and followed up with White’s second of the game this time catching a 21-yard pass from Mattei, set the tone for things to come. Kicker Shawn Leo add a 26-yard field goal as time expired making the score 24-6 as the two sides made their way to the locker rooms.

The third quarter picked up right where the second left off. On the Rams first possession, Mattei threw his third touchdown of the game, hooking up once again with White on a 22-yard score. Leo added another three, this time from 27 yards out. For the final touchdown of the game, Mattei and White connected for the third time on the day, this time White took it 89 yards to the house.

West Chester scored 34 unanswered points to end the game as the defense held the Pioneers to only 326 yards of total offense. The Rams were very balanced on offense gaining 223 yards on the ground and 263 yards through the air. West Chester continued their efficient play in the redzone, converting on three of their four trips inside the 20.

The Rams had a firm grip on the ball as they succeeded in having no turnovers, while recovering two LIU-Post fumbles. While they committed two more penalties than the Pioneers, they had less than half the penalty yards, 44 to 97. Given the dominance that WCU showed all game long, it’s hard to believe that only ten seconds separated the two teams in time of possession.

The Pioneers had no answer for White in the running game or the passing game. He led all receivers with six receptions for 176 yards and three scores. The rest of the team had only 87 yards receiving. On the ground, White carried the bulk of the workload, carrying the ball 28 times for 167 yards and just the one touchdown. White’s 343 all-purpose yards are fourth all-time for a West Chester player. He is also over 3,000 career all-purpose yards, 3,027 after Saturday’s performance.

Mattei looked like his usual self putting up very respectable numbers while taking care of the ball. He went 11 for 24 for 263 yards and four touchdowns. Shrader caught his first touchdown pass of the season in his first game back after suffering a separated shoulder in the first game of the year against Delaware.

Linebacker Ronnell Williams led a stout defense that never allowed the Pioneers to get anything going other than the touchdown in the second quarter. He led all defenders registering 14 tackles including 11 assists. With those tackles, Williams is now tied for the PSAC lead in tackles with Kenny Pettis of Edinboro with 78. Defensive backs John O’Donnell, Matt Carroll, and Shawn Krautzel each recorded seven tackles, with O’Donnell and Krautzel combining for two tackles for a loss.

Special teams made its mark as well this week as they blocked a Pioneer punt and forced a fumble. Punter Rich Bruno landed three of his five punts inside the five-yard line. With Leo’s two field goals, he now has 28 for his career, only two shy of John Marotta’s record of 30.

Next up for the Golden Rams is a home game against No. 16 Shippensburg (7-0) who is coming off a 73-35 victory over PSAC East contender Kutztown. It will be West Chester’s Homecoming and they will be looking to improve to 4-0 at John A. Farrell Stadium this season. Shippensburg’s offense will most surely test the defense as they are averaging almost 54 points per game. This is West Chester’s third ranked opponent as they defeated both Kutztown and California (Pa.), not to mention losing to Delaware who was ranked in the Top 20 in the FCS. Kickoff will be at 2 p.m.