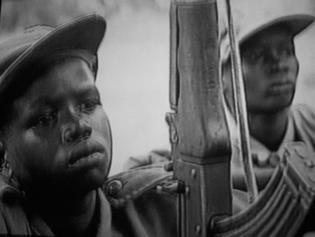 “Invisible Children” is a documentary produced by three college students that found a purpose in their lives by traveling to Uganda to bring the stories of the thousands of children that suffer daily. The constant fear and danger that they face everyday is unimaginable to most people and to make things worse most of the world doesn’t even know about them. The African country of Uganda has been involved in a civil war for the past two decades. In the past 20 years, five million natives have fled and approximately two million people have died. This is an international emergency yet it has received little to no international attention. Right now, children as young as eight years old are being kidnapped by the rebel army (LAR) and taught how to fight, kill and capture other civilians who are then taught to do the same.

The movie “Invisible Children” focuses on the youth of Uganda that travel miles every night to sleep in public places to avoid being abducted by the rebel army. Thousands of children make the trek from their villages and nearby towns just to sleep in hospitals and other public places on the wet, bug infested floors with no food, cots, or other basic necessities. Yet they must do this every night in order to survive.

Three teens from southern California left their homes, families and friends in the spring of 2003 to set out on an unknown adventure. They were not sure of what they would find, but had hoped that they would come back with stories that would not only inform themselves, but other people as well.

While in Uganda the teens traveled with the “night commuters” to see the situation through their eyes. The film focuses especially on four young boys from Uganda that live each day in horror. Through these four children, the filmmakers were able to get a glimpse of the pain, courage, survival, the affect of losing a brother to the rebels and also the innate joy found in these children.

When they returned home they hoped to produce a video that would be seen by millions to make others aware of what is going on in Uganda. The filmmakers were appalled that an atrocity of this magnitude existed and the world is basically doing nothing about it. After their journey they felt that they would bring this tragedy to reality and with that they organized the non-profit organization, “Invisible Children, Inc.”

The 50-minute documentary exposes the silent tragedy that is currently going on in Africa. The teens from southern California have made this film “Invisible Children: Rough Cut” to show the courage and resilience of these young children.

This film is fast paced, set to a stylish MTV beat and is made for the young and the young at heart alike. At times this documentary is funny, but in respect to the matter it is also heart breaking and informative. Once you see this film you will be forever changed.

With no end to the war in sight these children will continue to walk in search of safety. The children sing praise to God each day for simply being alive. God sees each and every one of them, yet to the rest of the world they are invisible.

For more information on the documentary, the war in Uganda, and what you can do to help please visit www.invisiblechildren.com.