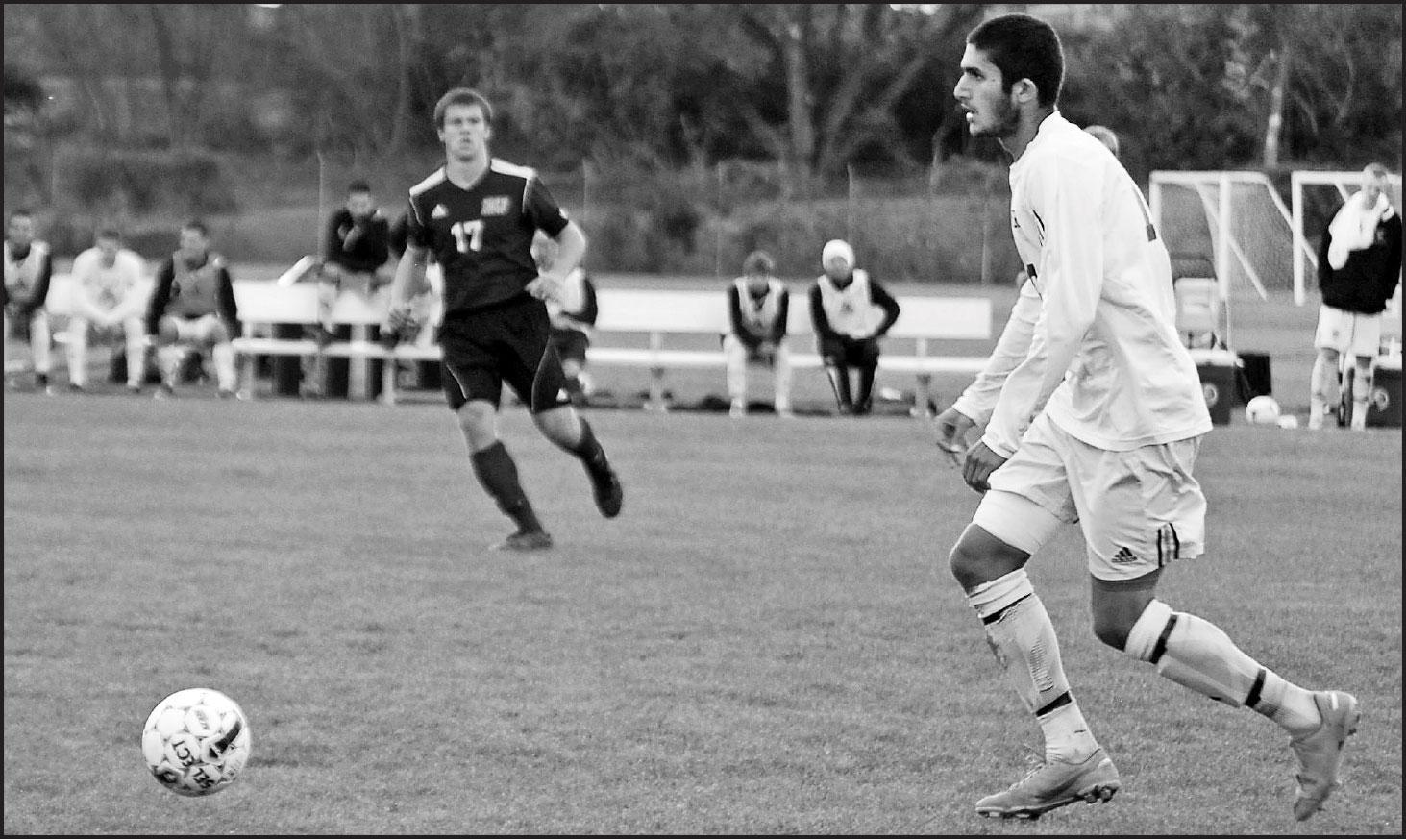 The West Chester University men’s soccer team capped off an impressive week on Saturday with a resounding 3-1 victory over Bloomsburg at the South Campus soccer fields.

Kevin McCann, Alex Caplan, and Alex Badulak all got onto the score sheet in a comprehensive win for the Golden Rams, who clinched a playoff spot for the first time since 2007.

After an uneventful first ten minutes or so, West Chester struck first as Conor Malarney found McCann, who beat the Bloomsburg goalkeeper to put the Rams up 1-0.

West Chester then played outstanding defense to preserve the one-goal lead, and did not allow Bloomsburg to get off a single shot for the rest of the first half.

With moments remaining in the first half, the Rams were rewarded for their hard work with another goal, as an accurate pass from Neil Gallagher set up Caplan, and the freshman slotted it home to double West Chester’s lead.

Bloomsburg, down two goals, came out with a new tenacity in the second half, and the Huskies scored through Fran Miller in the 58th minute to cut the score to 2-1.

Both teams then traded shots throughout the next twenty minutes, with both goalkeepers making saves. In the 80th minute, Bloomsburg’s Spencer Conrad came close, but WCU’s Garrett Bleiler was there to make the save.

In the 86th minute, West Chester put the game to rest when freshman Alex Badulak finished off a breakaway with a goal. It stretched the Rams’ lead to 3-1, and Bloomsburg was unable to come back from the two-goal deficit.

With the win, West Chester took sole possession of third place in the Pennsylvania State Athletic Conference, and also clinched a playoff spot for the first time since 2007. Only Gannon and Mercyhurst have a better PSAC record than the Golden Rams, who have already eclipsed their record from 2011 and have tied the six wins they recorded in 2010 and 2009. With two games remaining, including one against PSAC foe Millersville, West Chester has a chance to post its best record in half a decade.

Before defeating Bloomsburg, West Chester started the week off strong with a 2-1 victory on the road over East Stroudsburg on Tuesday.

The result could have gone West Chester’s way even more, but ESU’s goalkeeper Callum Hampson made seven saves to keep the game close.

Sophomore Tommy Ryan scored three minutes before halftime to put West Chester up a goal. And after fifteen minutes of back-and-forth action, the Rams were given the chance to go up 2-0 when the referee awarded the team a penalty kick.

It did not go the way the Rams would have liked, though, as defender Dan Venuto skied the spot kick over the crossbar. But instead of losing momentum after the miss, West Chester maintained control of the game and was quickly rewarded.

East Stroudsburg was given a chance from the penalty kick as well when the Rams were whistled for a foul in the box. ESU did not miss, as Nick Fischer scored from the spot to cut the score to 2-1. West Chester, however, was the team that seemed more likely to score another goal in the final 15 minutes and ESU never came close to tying the game.

“The team played with a lot of heart and are playing together,” Dan DeMasters told the WCU athletic website. “It’s a great thing to see, and they deserve it with the effort that they are putting forth.”

The wins over ESU and Bloomsburg marked the first time this season that West Chester had won two games in a row, and it stretched the team’s winning streak to three games. The Rams will get a short break from conference play on Monday when they host Felician.

Then, on Saturday, WCU finishes off the regular season with a trip to Millersville. That game could end up deciding what seed the Rams occupy in the PSAC playoffs, and whether or not their opening game will be at home or on the road.