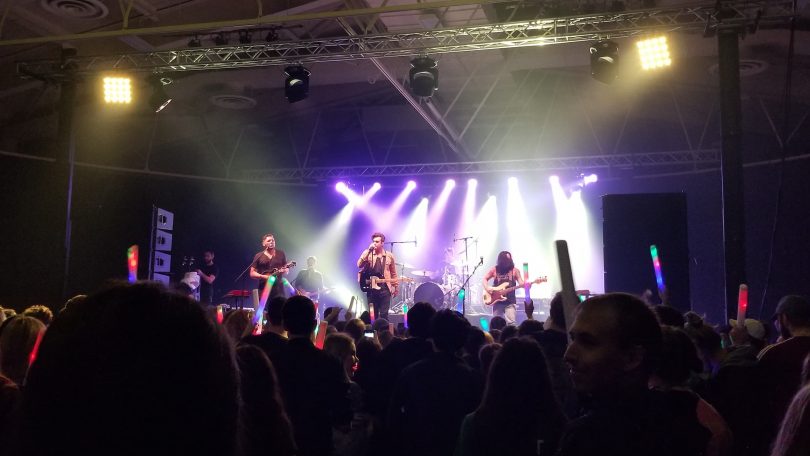 In lieu of West Chester University’s spring concert series, the vision for the very first Ramboree consisted of festivities on the Academic Quad, imitating those of a carnival, leading up to the big event of live music played by popular artist, American Authors. The Student Activities Council (SAC) planned for the event to last from 12 p.m. to 8 p.m. on April 27, 2019.

For the afternoon, SAC planned many outdoor activities, such as ziplining, a bouncy slide and a ferris wheel. Face painting, henna tattoos, psychic readings and spin art were also planned to take place in the fresh outdoors­ — all while student musicians performed acoustically for the duration of the outdoor activities. However, the weather had other ideas. Scattered showers urged me to avoid the walk to campus and forget about Ramboree until next spring.

SAC’s Vice President of Marketing, third-year Allison LaBella, informed me that she had to cancel the ferris wheel and zipline. The concert and all lawn games had to be moved inside. “It was definitely a challenge to rearrange our event all in a matter of three days, but it still turned out to be a success.” First-year member of SAC Abbey Johnson added, “All I wish for next year is that we’re able to host Ramboree outside. It seems a lot of people had fun inside, but it would have been even better to host it all outside, especially an outdoor concert.”

Ehinger Gym hosted face-painting, caricature art, henna tattoos, psychic readings and spin art beginning at 12 p.m. The annual Flex Flea Market was held in Ehinger from 12 to 4 p.m., selling local produce, grab-and-go meals and snacks. Live music from WCUR’s Local Discovery stage relocated to Ehinger too. From 3 to 5 p.m., Sykes Theater showcased the final take of each film made by students from the 48-hour DUBC Film Race hosted in Main Hall a few weeks ago.

Although the event was scattered throughout campus, Ramboree still had the day-long appeal of stopping by whatever event piqued your interest most, whenever is convenient for you. The odds of you bumping into a friend or making a new one at Ramboree is really high. Students greet you at the door of each event in their classic kelly green SAC polos and smiling faces. The entire body of people seemed to be laughing and indulging in the fact that paying the student activity fee was worthwhile. In one word, I’d call it community.

Francis Convery took the name of Fonvery on stage. Convery was reached out to by Emily Kofman, SAC’s assistant advisor of student activities, to open for American Authors in the Hollinger Field House. Convery claims that Kofman caught his act, Fonvery, performing at a talent show hosted in Sykes Student Union and the opportunity arose to perform on the main stage, so he took it. Fonvery is described as surf rock and sticks with simple vocals and acoustic guitar. “I don’t want to sound corny, but opening for American Authors made this the best day of my life,” Convery jokes. “I have no words, I’m speechless.”

Although an outdoor concert would have been a change from the spring concert series, Hollinger Field House makes a great venue for the vibe of a college house show, with light sticks flashing in dingy basement lighting; SAC has made a stage work in Hollinger for years.

American Authors was the main event of Ramboree and delivered to the alternative rock-loving students of West Chester University. I remember buying tickets to see New Politics last year, but American Authors was a free concert. Checking in with the crowd every now and then, asking “How are you doing, West Chester?” (as the natural performer does) American Authors brought energy to a pretty small but very vocal crowd. I could feel the beat of the drums in my chest. Each song rolled right along into the next. Students came and went all throughout the performance. Before you knew it, the whirlwind of sound was over but, of course, did not disappoint.

As for next year, the plan is to try it one more time with Ramboree outside. LaBella says, “Ramboree will continue to grow and become an amazing festival. There will always be things to improve upon, especially when starting a large-scale events for the very first time.”

Kirsten Magas is a third-year student majoring in English with a minors in journalism and creative writing. KM867219@wcupa.edu