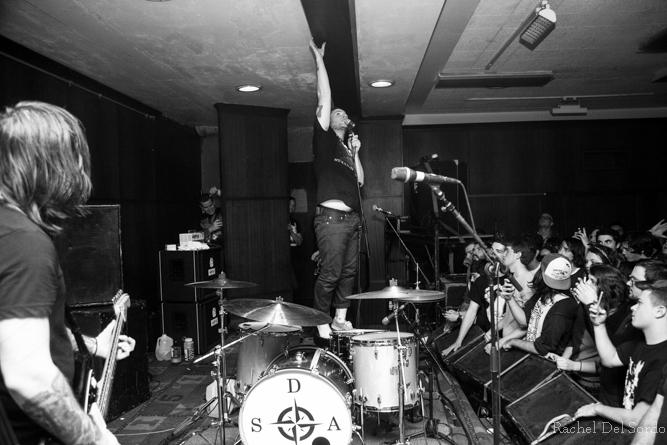 As 2014 begins to wind down in its final months, many concertgoers have come to accept the closing of popular Philadelphia music venue, the First Unitarian Church.  Known locally for hosting an array of underground acts from drone / ambient duo Sunn O))) to indie rock veterans the Dismemberment Plan, the church’s basement provides a welcomingly intimate atmosphere, creating a cozy locale for both musicians and fans alike.  On Oct. 23 2014, I had the pleasure of attending one of R5 Productions’ last shows with fellow West Chester student and 91.7 WCUR show host, Megan Sabers.  The headliner: Dads, a New Jersey band that pivots around emo music, using it as a touchstone to incorporate indie, punk, and post-rock into a distinctive hodgepodge of sound, were to take the stage after Tiny Moving Parts, a Minnesota trio that combines the technical complexity of math rock with the shimmering guitar twinkles of older emo music akin to acts like American Football or the Promise Ring.

While this was Megan’s first foray to the First Unitarian, this was my first time attending a concert at this venue in a few years, and it was just as inviting as I remember it.  Initially established as a place of worship in 1796, the archaism of the architecture is reflected in its exterior stone construction stained gradually by time, and its interior that hosts a rustic palette of browns.  The basement was exactly as I could recall, with a stage typically used to holding four or five performers dwarfed by the floor used to stand close to two hundred.  Tonight’s fans, clad in their denim jackets and Doc Martins boots with their cheap 40 oz beer cans, were talking about which of the two Mineral albums they liked more as they tried to promote their original music and tell the other concertgoers whose Philly basement they would be playing next weekend.  Despite the pushes from strangers to attend shows for bands I’ve never listened to, the crowd still created a cordial atmosphere, creating a sort of home for each other, knowing that they were in the confides of other music buffs and practiced musicians

Opener Tiny Moving Parts charged the audience with vigor, their sound reminiscent of the breakneck guitar wizardry of progressive / math rock band Fall of Troy with the ability to slow down tempo and perform a pristine passage of clean guitar joined by hi-hats and bass plucking that conjures the image of waking up to a snow day.  Calling upon bassist Matt Chevalier to handle harsh vocals as lead guitarist Dylan Mattheisen took the microphone for lead vocals.  Chevalier’s voice is an exceptional instrument, ranging from the cackles of a witch about to prowl the town of Salem, to that of a victim in a slasher flick, his voice often audibly breaking as his screams peaked.  While unconventional, its usage was certainly musical, juxtaposing the sweetness of Mattheisen on tracks like “Always Focused,” but complementing the sporadic and fluctuating pace of the instrumental.  Tiny Moving Parts also played fan favorite “Dakota,” with the entire audience joining in, yelling the hook, “I have never been so scared and sad at the same time” together at the tops of their lungs.  Moments like those are what make so many concerts worth attending, the band is in sync with not just themselves, but with a crowd that knows them well enough to scream their lyrics back at them.  This works especially well with a song like “Dakota,” that continuously builds over its slightly less than three-minute run time, ending with thick guitar chords churning and drums pulsating in a well-stated crescendo.

Even after the band’s performance came to a close, Mattheisen was more than happy to spend time with the fans in the audience, swapping stories as if he had been standing among them all along.  Anyone who approached him was greeted with a smile and thanked for attending, including Megan and myself, who were happy to tell him that Tiny Moving Parts’ most recent album, Pleasant Living, had been in circulation at West Chester’s student-run radio station, 91.7 WCUR the Curve.

The voracious appetite for the headline was about to be satisfied, as Parts parted ways with the stage, and the sound technicians helped Dads set up.  Dads is a duo, with John Bradley singing lead vocals, and playing either guitar or drums depending on what is needed, joined by Scott Scharinger to handle backing vocals and lead guitar duty.  Worthy of note is how Dads arranges their songs for a two-piece.  Unlike the rock duos of the 2000s like the White Stripes or Death from Above 1979, Dads does not feed a singular guitar through a rig of distortion pedals and feedback loops as a percussionist smashes a bass drum into oblivion.  Instead, Sharinger utilizes open guitar tunings to play fuller chords with ease and often applies two hands to his fretboard to tackle some of the trickier melodic leads the pair is known for.  However, the main focus must be how Bradley’s drumming packs enough punch to fill an entire room, similar to Chris Hrasky of Explosions in the Sky, his limbs fervently beating the heads with the intensity that must require new ones each show.

Listening to Dads’ new album on the drive up once more, Megan noted how Bradley’s vocals have improved tremendously since the release of their last album, American R****s (This is Important), stating that his shaky tenor voice seemed much more stable, especially reaching into his upper registry.  This was absolutely the case live, with Bradley nailing the vocal acrobatics of songs like “Fake Knees” with complete ease as he was keeping time on drums.

The absolute highlight of the night was how Dads chose to end the show.  Bradley invited his parents on stage, and spoke for what was the first time of the night.  “It’s been a dream of mine to play this venue,” he said, detailing how he would attend shows at the First Unitarian all the time when he studied at university.  The song “S**t Twins,” arguably the most popular song the band had released to date, was something that Bradley and Scharinger used to play in the Bradley house when they were in high school, but his parents had not heard it live in over a decade, so Bradley wanted to treat them.  During this song, it was like every member of the audience was aligned, singing the chorus of “you were standing outside my apartment with your mouth open wide and I hadn’t heard enough of it” at full volume, with Bradley’s vocals soaring to stratospheric highs as his parents stood with amazement at the musician he had grown to become.

Dads is not a Top 40 band, and their music will not be coming to a radio station near anyone any time soon.  However, they have made a loyal following out of listeners wanting to hear the sounds of old emo and post-rock in the present-day.  Given performances like the one we witnessed, it seems that two albums in, the only place for this band to go is up.