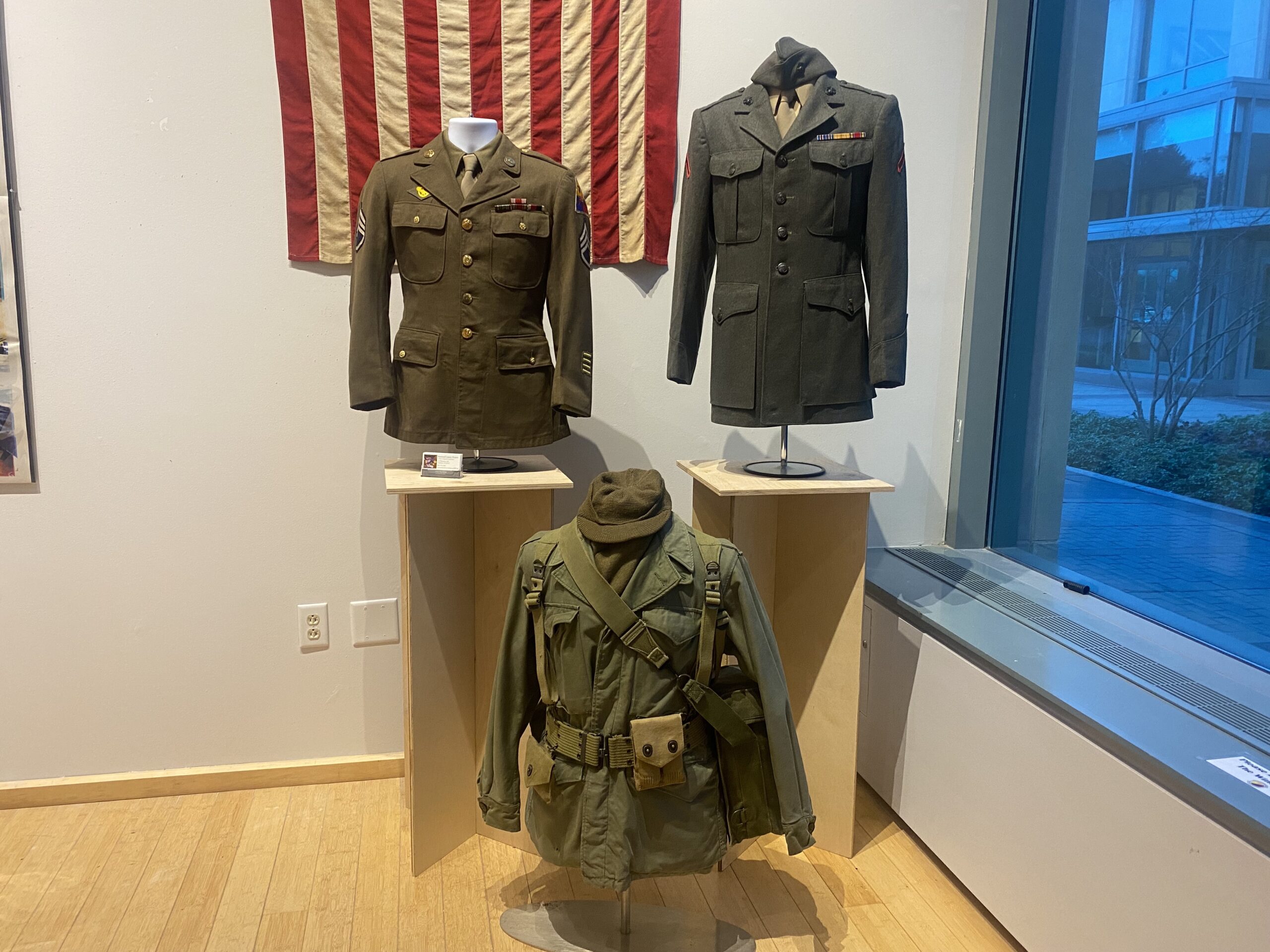 West Chester University’s Knaur Gallery is hosting an exhibit that is full of both art and history in equal parts. The exhibit, titled “For Real, For Reel: The Cinematic Art of The Second World War,” displays an impressive collection of World War II movie posters and a unique collection of WWII memorabilia. The combination, put together by Dr. Robert Kodosky from WCU’s History department and the Art department’s Professor Kristopher Benedict, makes for a show that is fascinating and moving as it celebrates such an important part of history. The opening on Nov. 10 was preceded by a discussion with a World War II veteran named Robert P. Gibson about his life and experiences as a soldier and a veteran.

The discussion kicked off with a talk from Kodosky about the history of film and World War II, saying that there is “more movies on it than any other conflict.” Dr. Kodosky gave a run down on the history that led to the war and the United States’ involvement in it. Movies became a big part of recruiting soldiers and generating agreement about involvement in the war. He shared that between the years of 1942 and 1945, The Office of Wartime Information produced over 200 movies that were meant to convince soldiers to join, and to this day World War II movies continue to come out year after year.

Kodosky talked about what the standard World War II movie features, but also stressed what they typically leave out. He highlighted veterans like Alma Bailey, a member of the Tuskegee Airmen, a group of military pilots who had twenty-thousand women members. This group was also made up of primarily African American members, as were a lot of groups and battalions throughout the war. Recognition for these brave veterans is something that is not found in a lot of the movies out about the war. The talk provided context about the content of the exhibit and how film and World War II have histories that are interwoven.

The exhibit came together thanks to a few lucky circumstances. Michell Friedman, who along with her late husband Stephen Friedman, more commonly as Mr. Movie due to his successful career as a movie reviewer, accumulated a large collection of film memorabilia. Kodosky happened to meet her and found that it included a plethora of WWII movie posters which sparked the idea about putting a show together. Those posters now line the walls of the Knaur Gallery. Posters from widely loved movies like “The Sound of Music” and lesser known vintage titles are displayed alongside artifacts from the time-period that they depicted on screen.

The memorabilia, including uniforms, letters, photos and other rare items came from a student at West Chester University, Adam MacMillan, a second- year marketing major, who runs a non-profit dedicated to collecting and showing World War II memorabilia. MacMillan said he came across the items through a combination of yard sales and people bringing him things they want to be preserved. He talked about his love for historical research and said “I want to make that process easier for future generations.” He hopes to establish a website where people can view all of his collection at once.

MacMillan is also well-acquainted with Robert P. Gibson, the veteran who came to campus to speak. They traveled to Normandy together last year as part of an effort to get veterans back to the beach that many of them had not seen since D-Day, over 70 years ago. Gibson detailed his experience in Europe during the war and his time visiting again. The discussion left the crowd both with heavy hearts at times from hearing the harrowing experiences that Gibson bravely faced and laughing at Gibson’s wry sense of humor at others.

All of these people and events came together to make “For Real, For Reel: The Cinematic Art of The Second World War” possible. The memorabilia are displayed in glass casings that run through the middle of the gallery. Mixed in with the movie posters, are pictures and descriptions of former WCU students and professors who fought in World War II.The combination of both fiction and reality make for a unique experience of seeing pieces of the war itself and how it has been depicted in media. When I asked Kodsky what he hoped people took away from the exhibit, he said “I hope people take time to appreciate veterans and learn more about their experiences.”

The exhibit will run in the Knaur Gallery until Nov. 9 and is open to everyone. There you’ll get to see MacMillan and Mr. Movie’s amazing collections and experience history in a way you haven’t before.