“Everything, Everywhere, All at Once” 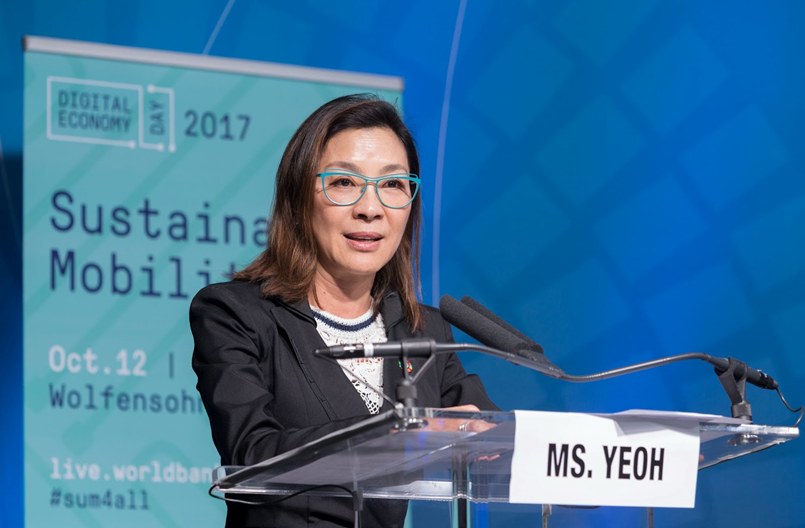 Picture this: a Chinese immigrant laundromat owner, a meek husband that is deadly with a fanny pack, strained family relationships, multiverse superpowers, a multi-dimensional god of nihilism, googly eyes and a truly everything bagel that is also an eldritch monster. After leaving the theater that Thursday afternoon, I couldn’t tell who was more ludacris: the characters and plot of this movie, or the Daniels themselves for directing it! The last time I had that same feeling was when I walked out of seeing “The Lighthouse” by director Robert Eggers, and I felt it again that Thursday, which I think is an accomplishment on the part of this film’s directors.

“Everything, Everywhere, All at Once” is directed by Daniel Kwan and Daniel Scheinert, (aka “The Daniels”) and stars Michelle Yeoh, Ke Huy Quan, Stephanie Hsu, James Hong and Jamie Lee Curtis. The film follows Evelyn, a Chinese immigrant struggling with being audited by the IRS, her diminishing marriage to her husband, taking care of her elderly father and her tumultuous relationship with her daughter. After meeting with her auditor, Deirdre, Evelyne is suddenly pulled aside by her husband who claims to be from another timeline, asking for Evelyne’s help in defeating an insidious multiverse god, “Jobu Tobaki.” From there, Evelyne must tap into the abilities of her other selves and defeat the nihilistic Jobu Tabaki and save the multiverse!

The idea of a multiverse being used in narrative storytelling has been gaining popularity in recent times such as with Marvel’s “What if,” series, so it feels like this movie couldn’t have come along at a better time as it not only capitalizes on the ideas of the “multiverse,” but also subverts them by being as unashamedly ridiculous as possible with those ideas. That said, it maybe easy to think of the Daniels’ latest movie as another quirky comedy, but underneath the butt plugs and sausage fingers, the film is also a drama about the struggles that family’s face: troubled marriages, existential dread, generational differences and confronting one’s own prejudices. Despite these switches in tones throughout the film’s runtime, it never detracts from the overall experience.

The film does many things right, all at once (get it?). To start with, Michelle Yo’s character carries the struggles of immigrant life in America, and also grapples with mid-life crises and her past regrets. Ke Huy Quan, a former child star, absolutely comes into his own, defying the “funny kid” typecasting that has shadowed him, and acts as the heart of this film, while also flexing his martial arts moves alongside of Yo. Hsu does a remarkable job of epitomizing the angst of Millenials and the LGBTQ+ community, while Curtis shows an impressive amount of character depth for a grumpy, pen-pushing bureaucrat.

In terms of the picture’s greatest strengths, this one is a toss-up between the cinematography and the writing. This film, as some critics of pointed out, is a love letter to Hong Kong action cinema, with fast-paced, almost hyperactive cinematography: quick cuts, slow motion, different shutter speeds, smash cuts and clever use of CGI and green screen to emphasize the cerebral elements of this gonzo film. At the same time though, the cinematography isn’t afraid to go from the frantic pace of a martial arts movie to a bit more slow and emotional pace with each sequence that explores the deep-seeded familial turmoil between Evelyn and the contentious relationship with her father, husband and daughter. The Daniels have a knack for camerawork and deserve all the credit that comes with this latest production.

On the other hand, the writing for this movie is strong and smart and also unapologetically comical. When was the last time you saw two rocks talk about existentialism, or the use of an everything bagel to represent the soul-sucking nihilism of late-capitalist, modern life? The film makes good use of this sense of magical realism and absurdist comedy as a smokescreen for a deep exploration of the themes and ideas it brings up. The dysfunction faced by Evelyne and her family is something familiar to everyone, especially to immigrant families, who’s generational differences often explode to the forefront of the story, forcing the characters to confront themselves at the same time. When not dealing with this, the film sharply criticizes the prejudiced bureaucracy faced by minorities at the hands of the establishment, while also showing those same bureaucrats are also people too with their own flaws and struggles. This brilliant use of comedy to tackle serious subject matters is the hallmark of the movie, elevating it to more than just a simple martial arts comedy.

The Daniels had already proved themselves with Swiss Army Man that they had the potential for strong, creative filmmaking, and now with “Everything, Everywhere, All at Once,” they put away any doubts about their abilities as filmmakers. If you’re looking for a smart, funny movie that takes pop-culture phenomena like the multiverse, but does them in a creative way, then I think you’ll really enjoy this! Marvel, you’d better take notes from this movie!