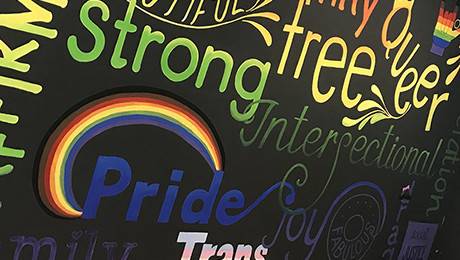 The flyer from the event. Photo credits: RamConnect.wcupa.edu

On Tuesday, March 29, I had the pleasure of attending the event, “Making Waves: A Conversation with Schuyler Bailar.” According to the event flyer on RamConnect, Schuyler is the first transgender men’s athlete in any sport in the NCAA D1 division. He specifically is a swimmer — hence the name “making waves.”

The struggle for Bailar started at a young age. He was assigned female at birth, but, in high school, he began to feel like he wasn’t a boy or a girl, which made using the restrooms difficult. At one point during his high school career, he recalls that everything seemed to be going great — he got his driver’s license and received a scholarship to Harvard! However, on the inside, he didn’t feel right; he felt so lost and disconnected from himself. During this time, he said he struggled with his mental health, which included acts of self harm, depression and an eating disorder. He began going to therapy but it still got worse, so at the end of his senior year, he took a gap year and went to an eating disorder treatment facility for 131 days (around five months). Bailar recalled this being the first time he had to slow down and really think about himself, and this was the place where he realized that he was transgender.

After realizing he was transgender, he realized he had to think about the swimming part of things. Bailar stated, “The gender boxes are very clear [in athletics…] I had spent all this time trying to be honest with myself. I knew I owed it to myself to be honest with my coach.” The coach for the women’s swimming team was very supportive and said they would figure something out together, which made him feel relieved. Later on, the men’s swimming coach said Bailar could swim for the men’s team too, which meant that he had a big decision to make. Ultimately, with the help of his coaches, he decided to swim for the men’s team. At his first meet, there were lots of reporters there, along with his friends and family. He began to get nervous because his pregame ritual was different, as his swimsuit had changed. Bailar said, “Your identity does not ever have to hold you back from your passions,” which is such a strong and important point.

Bailar then went on to define some vocabulary for the audience:

One thing Bailar also mentioned was talking to kids about being transgender, saying that it’s important to talk about it. I’ll leave you with one last quote from Bailar: “Trans people do not threaten sports, but excluding trans people will threaten sports.”

Hally Everett is a fifth-year Media & Culture major with minors in Health Sciences and Entrepreneurship. HE885418@wcupa.edu