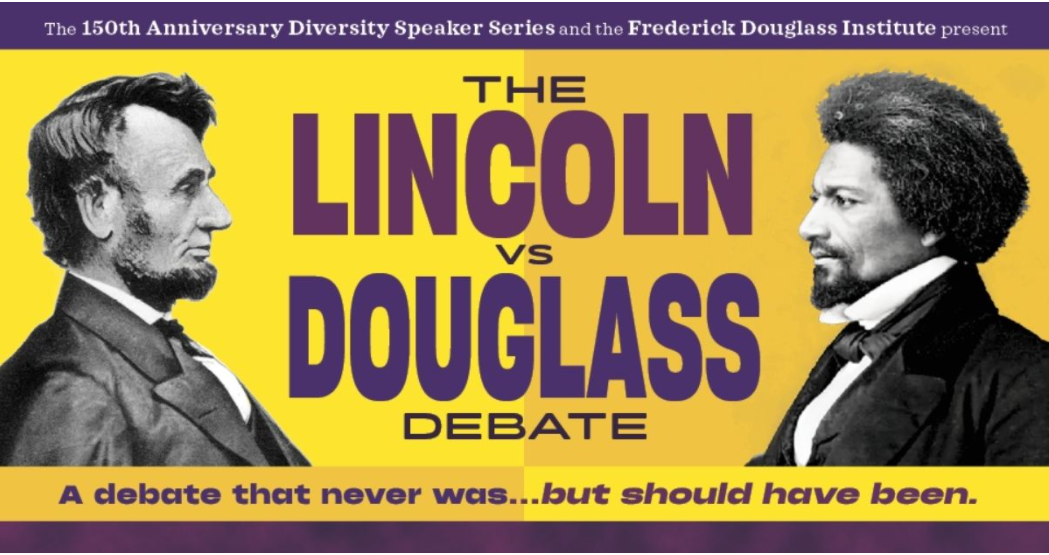 Every word that Lincoln and Douglass spoke during the debate was taken from actual speeches and writings made in their lifetimes. All of Douglass’ words were taken from before Lincoln’s assasination in order to create a fair exchange.

Cook, the writer of the program, is largely known for his talent in carpentry but pursued his passion for theater in writing this project. He has received a Regional Emmy nomination for a film including Gleason, the actor who played Lincoln for the debate.

Both Gleason and Morsell are known for playing Lincoln and Douglass respectively and were personally chosen for this performance. Gleason is a graduate from West Chester University and has portrayed Lincoln at the White House Visitor’s Center, Ford’s Theatre and the Library of Congress. Morsell has acted for over 30 years and has portrayed Douglass at multiple Frederick Douglass centennial celebrations where he has subsequently been praised by The New York Times.

The Playbill handed out shortly before the event started stated that Lincoln and Douglass would debate on “the historically significant questions of the future of Black freedmen in a post-slavery America, on the prospects for racial equity and on the challenges Black and white Americans would face in the post-Civil War years.”

As for the present significance of this debate, it stated, “This production arrives at a moment when America faces a serious reckoning on the same questions Lincoln and Douglass might have debated — so there is much we can learn from the exchange of ideas between these towering minds.”

The program opened and ended with a performance by the Gospel Ministries of West Chester University. It opened with “Before You Lord, We Bow” and closed with “The Battle Hymn of the Republic.” The debate included selections from some of the most famous speeches of both of the figures. Lincoln quoted his second inaugural address and Douglass spoke from his famous speech, “What to the Slave is the Fourth of July?”

In a touching moment, the actors reimagined the well-documented time that Lincoln and Douglass met in-person after Lincoln’s inaugural address where Lincoln asked Douglass’ opinion of his speech stating, “Douglass, there is no man in the country whose opinion I value more than yours” to which Douglass responded “Mr. Lincoln, that was a sacred effort.” A month after this exchange, Lincoln was assassinated.

Shortly after this exchange in the program, Lincoln walked offstage as Douglass stayed onstage and a gunshot sound resounded in the theater, symbolizing Lincoln’s premature death and also alluding to the racism and segregation that Douglass continued to face with an arguably less supportive president, Andrew Johnson.

After the event, Gleason interacted with several audience members, still in character as Lincoln. He even handed an audience member a small piece of aged paper stating “one presidential pardon good for: 3 minor, or, 1 major offense.” The paper is signed “A. Lincoln” and in small print on the bottom, it states, “you can’t fool all the people.”