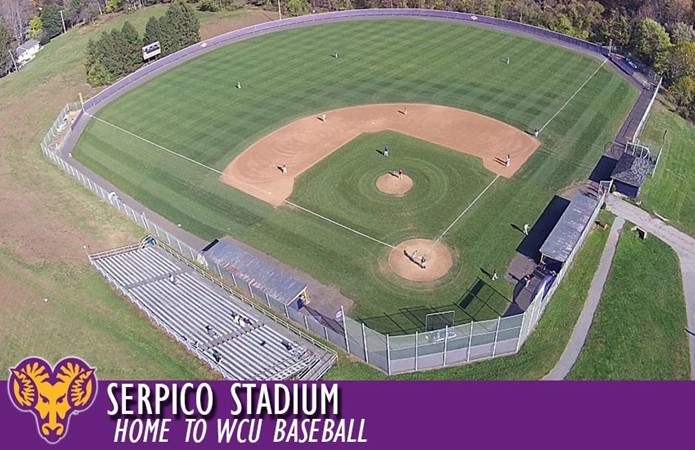 Golden Rams’ baseball is set up for another successful year after a scorching hot 15-3 beginning to the season. With veteran leadership and talent peppered throughout the roster, there’s no denying that West Chester is a serious contender to take the PSAC East crown in 2022. I sat down with the former player, now head coach Mike LaRosa, and asked him about each of the paths that he’s taken, not only in the past 16 months, but dating back to his time on the field as a Golden Ram in 2002.

“I loved it, I’ll just narrow it down to that, best decision of my life coming to school here,” he told me. “[I] just loved everything about being a student-athlete here at West Chester.”

LaRosa’s love for West Chester baseball seemingly translated well onto the field, batting .362 and recording 234 hits in his Golden Ram career, making him 5th all-time in WCU Baseball history. He was also selected to the All-PSAC team all four years of his career and took home the NCAA Division II Defensive Player of the Year award as a sophomore. Needless to say, LaRosa’s career at West Chester on the diamond was a storied and memorable one.

Many players have had great careers at West Chester, but very few have made the transition from having success as a player to cultivating that success as a coach.

“There was just something always tugging at me that I believed I should be coaching college baseball,” LaRosa said. “The big thing is, being here as a student-athlete had such a major impact on my life and the trajectory of it, and I knew how important it was in my own growth and development. Really that was the main thing, I wanted to be a part of helping student-athletes at the college level in their own growth and development, and help make the trajectory of their life a positive one.”

While Coach LaRosa told me that he most certainly has a love for baseball, coaching was very clearly more than that for him. So in 2010, after his years as a player, he began his coaching career in an assistant position at Neumann University and was quickly hired as the head coach at Widener University in 2012.

While at Widener, LaRosa’s teams commanded a record of 195-155-2, and in their 2014 season even finished a game away from the NCAA Division III Finals. LaRosa’s success was impressive, and when former West Chester head coach Jad Prachniak took an assistant position at the University of Delaware, West Chester was quick to hire the former Golden Ram’s second baseman.

The turnaround was quick for the Golden Rams, LaRosa was only named head coach a few weeks before the season started, so his ability to take in what it meant to be the head coach at his alma mater was delayed.

“It was interesting, I got hired and it was like boom we were starting our season,” LaRosa told me. “Everything moved so quickly, so I didn’t really feel like I had a ton of time to stop and look around and realize how surreal the moment was. It really didn’t take until the summer when I kinda stepped back and it all just sunk in, so after reflecting after last season and things being stabilized a little more, it’s just, it’s awesome.”

Last season was a season unlike any other, not just for Coach LaRosa, but for the entire PSAC. There were no non-conference games, and COVID-19 protocols dictated much of how teams were able to practice and meet. In addition, our home field, Serpico Stadium, was under construction for the entirety of the year, leaving our Golden Rams without a true home field, and delaying the awaited homecoming for Coach LaRosa.

That delay lasted over a year past when Coach LaRosa was hired, only ending for the Golden Ram’s home opener this year in early March.

“Being back at Serpico Stadium and having our first home game a couple of weeks ago was super special, to just have my family there. Just to see our player’s families there and the support that was a really special thing,” he said. “And now being back on Serpico and practicing at home in the fall, that has felt cool because there are moments where I just stop and think back to my time as a player, now being on the other side of it, and I have a much greater found respect for my coaches when I was here because I didn’t truly realize how much they did.”

Coach LaRosa spoke a lot on the impact that the coaches before him have had, not only on him and his methodology, but on the culture here at West Chester as well.

“I go back to the winning culture here, I know the way the mindset was as a player and the expectation of winning and as a new coach you wanna come in and you have all these ideas that we can do this, and this, and this, and this is how we’re going to be better, but I do remember as a player our coaches really did a great job of understanding when they needed to insert themselves and when not to.” He continued, “We just understand that the guys here know how to win, so let’s make sure we don’t get in their way.”

The Golden Rams have definitely proven that they know how to win this year, and next weekend’s series against Bloomsburg will be a great way to test that.

Last year Bloomsburg played spoiler and eliminated West Chester in the PSAC tournament, keeping them out of regional play.

“That was a tough end to the season and I do think it’s definitely had to have left a bad taste in guy’s mouths, and we’re not putting ourselves in that position again,” LaRosa said. “We’re going to make sure that everything we can control, we’re going to do well.”

The Golden Rams play the Bloomsburg Huskies at Serpico Stadium this Friday, April 1.1st at 2 p.m., and the following day in Bloomsburg at 12 and 2:30 p.m.